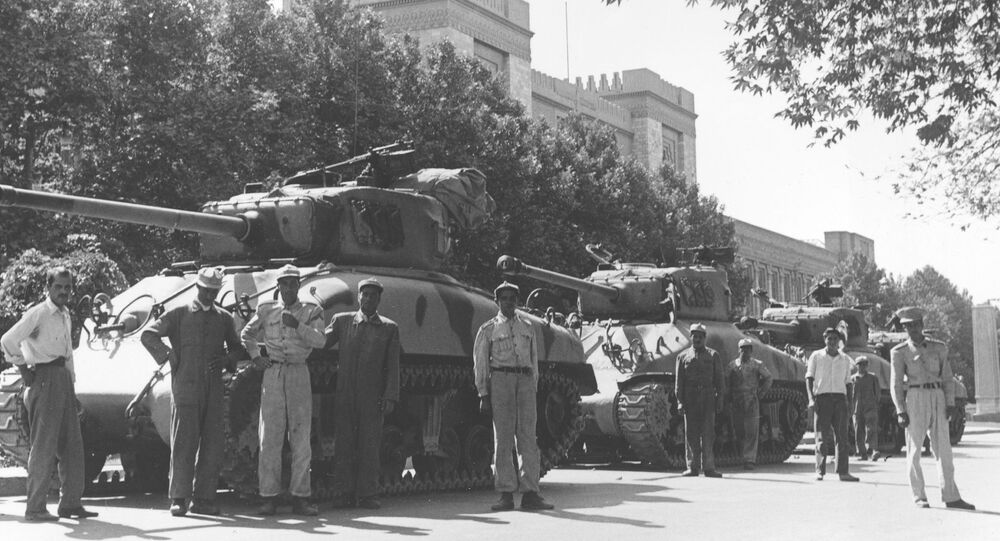 In the 1950s Iran was one of the world’s biggest oil producers and the Anglo-Iranian Oil Company - which later became BP - owned the concession to drill oil there. So when Iran threatened to nationalise it Britain and the US took covert action.

An account by one of MI6’s top spies in the Middle East has revealed how Britain conspired with the United States to bring down the Iranian prime minister, Mohammad Mossadeq in 1953.

After a military coup Mossadeq was put on trial and remained under house arrest until his death 14 years later.

Norman Darbyshire gave an off-the-record interview for a 1985 TV documentary but he refused to be identified or go on camera so the clip was not used in the programme. But a transcript was published on Monday, 17 August, by the National Security Archive at George Washington University in the US.

So this is how we get rid of that madman #Mossadegh," announced John Foster Dulles to a group of top Washington policy makers one day in June 1953.
کودتای ننگین pic.twitter.com/ZJvftWOEQU

​Mossadeq became prime minister in 1951 and was supported by nationalist MPs in Iran’s parliament, the Majlis. But when he nationalised the Anglo-Iranian Oil Company it created a rupture with Britain, which relied on supplies from Iran.

Darbyshire recalled how the Foreign Secretary Anthony Eden - who would later get Britain embroiled in the Suez Crisis - authorised huge bribes for members of the Majlis in a bid to draw them away from supporting Mossadeq.

​He told the interviewer: "Vast sums of money were being spent. He [another MI6 spy Robert Zaehner] used to carry biscuit tins with damn great notes. I think he spent well over a million and a half pounds."

But Zaehner’s bribes failed and when he was forced to leave the country Darbyshire took over and began plotting a coup.

“The coup cost £700,000. I know because I spent it,” he told an interviewer from Granada Television who was working on a series called End of Empire.

Granada has now produced a new documentary, Coup 53, which will be broadcast on Wednesday 19 August.

In the interview Darbyshire said the main reason MI6 wanted to get rid of Mossadeq was because of the fear he would fall under the influence of the Soviet Union.

Darbyshire said: "They would have wanted to oust Mossadeq regardless of whether he would have signed an agreement favourable to the British. Eventually they would have been forced to have considered getting rid of him to prevent a Russian takeover. I am convinced that was on the cards.”

Darbyshire said MI6 and the CIA recruited Shah Reza Pahlavi’s sister Ashraf in a bid to persuade him to support the overthrow of Mossadeq.

67th anniversary of the CIA/MI6 coup in #Iran approaches: Mossadegh was naive, he believed in democracy & presumed the US did too. Without this coup, we might have had a thriving democracy in the heart of the Muslim Mideast all these years. How different the world would now look! https://t.co/hL6illiKH1

​He also recruited a key general, Fazlollah Zahedi, to lead the coup.

The plan was for Iranian army units to seize power and for the shah to sack Mossadeq and replace him with the pro-western Zahedi.

Darbyshire, who was based in Cyprus at the time, said: “The plan would have involved seizure of key points in the city by what units we thought were loyal to the shah…seizure of the radio station… the classical plan.”

In the 1985 interview Darbyshire admitted organising the abduction and killing of Mossadeq’s chief of police, General Mahmoud Afshartous.

While the regime in Iran is looting our national resources to export destruction and terror, the region is taking critical steps towards progress and peace. Soon, when this regime is gone, Iran will reestablish productive relations with nations across the Middle East and beyond.

​The transcript of Darbyshire’s interview was handed over by Mossadeq’s grandson, Hedayat Matine-Daftary.

The Shah remained loyal to the United States and Britain until he was deposed by a revolution in 1979 and fled into exile.

Today activists opposed to the Tehran government and exiled abroad occasionally push forward the Pahlavi dynasty in times of instability in Iran.

In 1956 Anthony Eden - by then Prime Minister - intrigued with Israel against another nationalist leader in the Middle East, Egypt's Gamal Abdel Nasser, but this time the US opposed Britain and Eden resigned after the fiasco of the Suez Crisis.