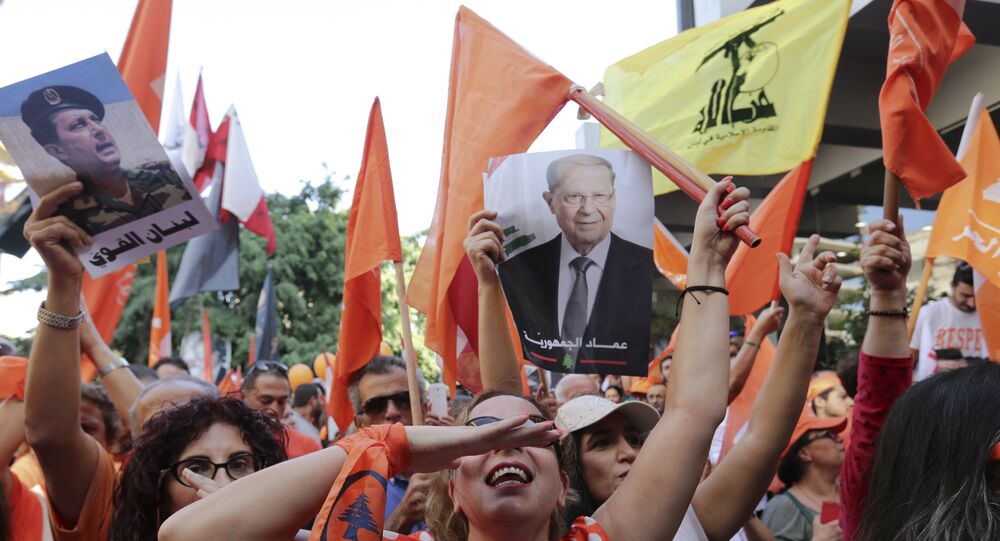 Relations between Lebanon and Israel have been poor for decades, with the extent of smoldering tensions recently exhibited when the Lebanese government refused to accept aid from Tel Aviv in the aftermath of the August 4 ammonium nitrate explosion in Beirut’s port, which left over 170 people dead and caused up to $15 billion in property damage.

Lebanese Prime Minister Michel Aoun has told French cable channel BMF TV that he would not rule out a peace deal with Israel if existing problems in relations between the two neighbours are resolved.

“It depends,” Aoun said, when asked if Lebanon could follow in the UAE’s footsteps and sign a peace deal with Tel Aviv one day.

“We have problems with Israel that we need to solve first,” Aoun, whose Free Patriotic Movement party has a long-standing alliance with Hezbollah, a sworn enemy of Tel Aviv and Zionism which has repeatedly threatened to ‘destroy’ it, added.

In his comments on the Israel-UAE peace deal on Friday, Hezbollah leader Hassan Nasrallah called it a “knife in the back” by Abu Dhabi against “Jerusalem and the Palestinian people,” and a political “favour” to both US President Donald Trump and Israeli Prime Minister Benjamin Netanyahu.

Aoun did not specify which problems Lebanon and Israel have yet to resolve. The countries are still technically at war with one another, with Tel Aviv occupying a 25 square km strip of Lebanese territory known as the Shebaa farms in 1978 after it invaded and occupied Southern Lebanon. The Shebaa Farms was formally annexed in 1981, although no country aside from the United States recognized the move.

In 2006, Israel and Hezbollah waged a 34 days in Lebanon, northern Israel and the Golan Heights before the United Nations brokered a ceasefire, with the conflict ending in a stalemate and both sides claiming victory. Since that time, Tel Aviv has repeatedly carried out airstrikes inside Lebanon against Hezbollah targets, while the militant group has launched rocket attacks into northern Israel and targeted border forces in hit and run attacks.

The two countries also have competing claims regarding lucrative oil and gas resources in the eastern Mediterranean.

Aoun’s comments to BMF TV were not the first time that he’s hinted at the possibility of a peace deal with Israel. In 2005, the politician said that although Lebanon would be the “last to sign a peace agreement with Israel,” Beirut could not “continue to resist Israel all by itself” after Egypt and Jordan signed their own peace treaties with Tel Aviv in 1979 and 1994, respectively.

In his remarks on August 14, Nasrallah warned that Israel would “pay an equal price” if the investigation into the Beirut blast were to reveal Israeli involvement in the disaster.

A week earlier, the Hezbollah leader avoided mentioning Israel, and called for the army to take over the investigation, citing their status as an institution respected by all segments of Lebanese society.

Aoun, who previously called for the probe into the explosion to be carried out only by Lebanese investigators, and refused to rule out that the blast may have been caused by a bomb or missile attack, said Saturday that the recent decision to allow US and French involvement became a necessity because “they, more than us, have the capability and ability to find out the details of what got the ship here, what is the source and who owns it.”

Mass protests in the aftermath of the explosion culminated in the resignation of Lebanon’s government on Monday, with outgoing Prime Minister Hassan Diab blaming systemic corruption for the disaster and warning that similar incidents could take place in the future.

The August 4 port blast left at least 171 people dead and 6,000 injured, with as many as 300,000 other residents displaced. The explosion decimated much of the port area and blocks around it, and shattered glass or caused other damage to thousands of other buildings in the Lebanese capital. Demolition experts estimate that the 2,750 kg of ammonium nitrate at the port caused a blast with an explosive force equivalent to that of a small nuclear bomb.

The ammonium nitrate involved was reportedly brought to the port aboard a Moldova-registered cargo ship in 2013 on its way from Georgia to Mozambique, and was eventually abandoned by a Cyprus-based Russian businessman after it was proven unseaworthy. In the years since 2013, local authorities and courts waged a long and fruitless battle to pass responsibility for handling the dangerous cargo onto one another’s shoulders. Attempts to sell the ammonium nitrate, or hand it over to the military, also proved unsuccessful.