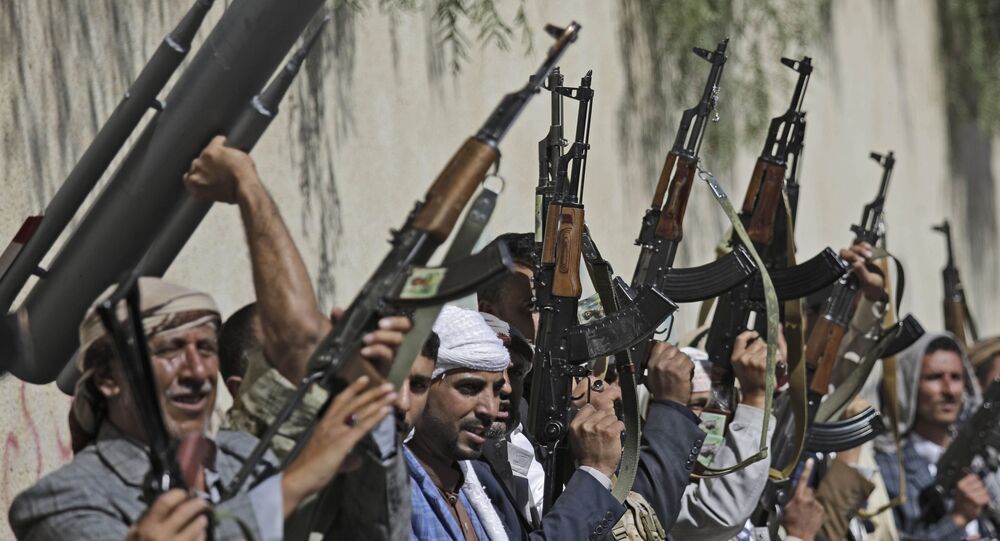 Yemen's Houthi militia have launched dozens of drone and missile strikes against military bases, airports and cities inside Saudi Arabia in recent years. The Yemen conflict began in 2015, when a Saudi-led coalition of mostly Gulf countries began a military intervention to try to restore the southern Arabian nation's ousted president to power.

The Saudi-led coalition has intercepted and destroyed a ballistic missile launched by the Houthis toward Saudi Arabia, a coalition spokesman said Sunday.

The missile was reportedly aimed at 'civilian targets' in southern Saudi Arabia, with the thwarted attack coming following the interception of two missiles and one drone reportedly launched toward the Saudi city of Khamis Mushait, about 100 km northwest of the Yemeni border, on Thursday.

Fighting between the coalition and the Houthis escalated in May, after a brief truce introduced amid the coronavirus crisis expired.

The Saudi-led coalition began a military intervention in Yemen in March 2015 in an attempt to restore ousted President Abd Rabbuh Mansur Hadi to power. Hadi fled to Saudi Arabia in early 2015 after a series of uprisings culminated in the Houthi takeover of much of the country, including Sanaa, the capital city. Over the past five years, the coalition has made little progress in ousting the Houthis from their positions, and the militia group has gone on the offensive, firing rockets, ballistic missiles and drones into Saudi Arabia itself. In September 2019, the Houthis struck two major Saudi oil processing facilities, temporarily halving Saudi Arabia's oil production.

Saudi Arabia and its allies have accused Iran of aiding the Houthis militarily and providing them with the advanced missiles and drones at their disposal. Iran has denied the allegations, pointing to the naval blockade of the country by coalition forces. The Houthis themselves have pointed to the existence of a large stockpile of Soviet-era missile systems in the country, which they claim have been repaired and upgraded for use against the coalition. Last month, US Secretary of State Mike Pompeo announced that the US and allied forces had intercepted a major Iranian weapons shipment off Yemen destined for the Houthis containing RPGs, assault rifles, 21 surface to air and land attack missiles, and several anti-tank missiles, with the shipment said to be the third of its kind seized by the US since late last year.

© AP Photo /
Iran Slams US, Saudis for Using UN as ‘Tool’ to Claim Iranian Involvement in Houthi Drone Attacks
The war in Yemen is thought to have claimed the lives of over 100,000 people, with the United Nations fearing that as much as 75 percent of the country's population of 28.5 million is in dire need of humanitarian assistance. The US suspended most of its aid deliveries to areas controlled by the Houthis in March, citing its alleged misuse by the militants. In late March, Yemeni councils urged residents to avoid making contact with protective face masks reportedly airdropped by Saudi aircraft, claiming that they may have been contaminated with the coronavirus.

Parties to the Yemen conflict met in Stockholm, Sweden in December 2018, where they agreed to a series of measures aimed at reaching a peaceful settlement to the war. Both sides have since repeatedly violated the ceasefire. Late last month, UN Special Envoy for Yemen Martin Griffiths warned that the UN-brokered Yemen peace talks might fail completely, and said that if that happened the country could "enter a new phase of prolonged escalation," including the "uncontrolled spread of COVID-19, and...severe and threatening economic decline."