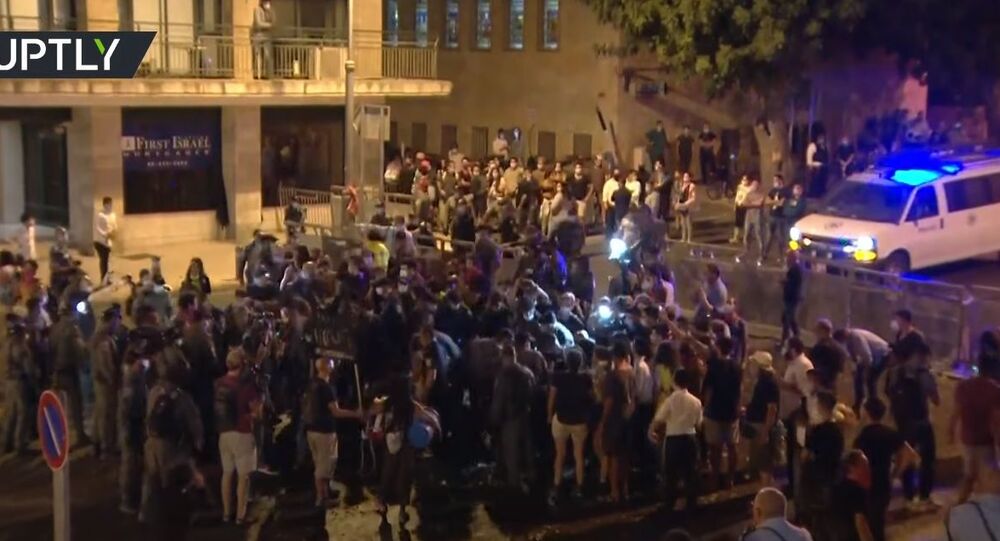 Rallies against Israel’s Prime Minister Benjamin Netanyahu have been taking place across the country for several months, driven by outrage over corruption charges against him and the government’s handling of the coronavirus pandemic.

Thousands rallied against Israeli PM Benjamin Netanyahu in Jerusalem on Saturday, with footage showing scuffles with police, as part of ongoing protests triggered by graft charges against him and indignation over the government's response to the COVID-19 pandemic.

An estimated 10,000 people took part in the main anti-government demonstration outside the prime minister’s official residence in Jerusalem, according to The Times of Israel, which cited Hebrew media and Army Radio. Numbers were suggested by local media as being down from last week’s turnout.

Happening now: Thousands of Israelis gather at the prime minister’s residence in Jerusalem one month after these protests began in earnest. Different people coming for different reasons (corruption, economy, occupation), but unified in their anger at Netanyahu and his government. pic.twitter.com/GikJmsgCRI

​It was reported that ten protesters were arrested after police started dispersing demonstrators who lingered at the scene after midnight, with some putting up resistance.

Among those filling the streets were people hurt by the impact of the pandemic lockdowns, such as event producers and suppliers for entertainment events, who demanded they be allowed to return to work.

The current spate of protests had a new narrative as they came in the wake of a Peace Deal agreed upon between Israel and the United Arab Emirates (UAE) on establishing diplomatic ties.

Slogans referring to the US-brokered deal were seen, reading: “Fly Emirates and never come back,” and “If there’s no bread, fly to Dubai.”

From the heart of JERUSALEM during anti-Netanyahu protest. Even Israelis are not buying UAE’s crap.

​One of the organisers of the protests, the “Black Flag” anti-corruption group, issued a statement dismissing the agreement struck on 13 August to normalise diplomatic ties.

“While the prime minister is busy arranging flights to pools in Abu Dhabi for himself, the people of Israel are collapsing [due to] the failure to manage the economic and health crises. No flights to the Gulf, jobs in Israel!” stated the group.

Critics of the agreement branded it a ploy to distract Israelis from problems at home while boosting Netanyahu’s political clout.

US President Donald Trump touted the “historic peace agreement” reached between Israel and the United Arab Emirates (UAE) on establishing full diplomatic ties. Under the deal, expected by the US president to be signed in three weeks, Tel Aviv agrees to postpone its plans to extend sovereignty over the West Bank.

Rallies have been taking place regularly for months outside Prime Minister Netanyahu’s Residence on Balfour Street in Jerusalem, as well as in Tel Aviv and other areas; participants are demanding that he resign due to his indictment on corruption charges.

Netanyahu is on trial for a spate of cases alleging he had been on the receiving end of pricey tokens from billionaire friends, and traded favoirs to obtain more favourable coverage in the media.
All accusations of wrongdoing have been rejected by the Prime Minister.