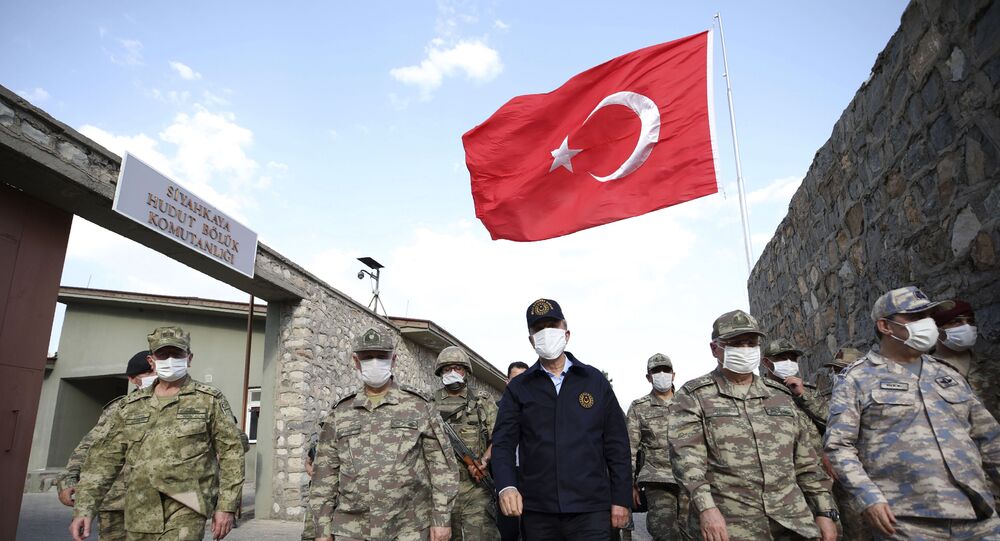 Earlier on Tuesday the Iraqi government condemned a Turkish drone strike in the country's province of Erbil that killed two Iraqi soldiers, slamming "repeated military violations" by Ankara as a "dangerous violation of Iraqi sovereignty, international law and the UN Charter".

Iraq cancelled a 13 August visit by the Turkish Defence Minister, Hulusi Akar, to the country, following condemnation of a Turkish drone strike in the Erbil province that killed two Iraqi border guards, according to an Iraqi Foreign Ministry statement.

The Turkish ambassador in Iraq has been summoned to Baghdad after the Turkish drone attack.

Earlier on Tuesday, Baghdad reported that at least two servicemen had been killed in a drone strike against a military vehicle in the Sidekan area. According to the Al-Sumaria TV channel, five Iraqi servicemen were killed, along with ten members of the Kurdistan Workers’ Party (PKK). Iraq condemned the attack, denouncing "repeated military violations" by Turkey as "dangerous violation of Iraqi sovereignty, international law and the UN Charter".

Turkey has been fighting the PKK, which seeks the establishment of a Kurdish autonomy in Turkey and is considered a terrorist organisation by Ankara, since the early 1980s. A ceasefire signed by the PKK and Turkey in 2013 collapsed after PKK militants were alleged by Ankara to have committed several terror attacks two years later.

As many PKK bases are situated in northern Iraq, they are regularly attacked by Ankara by the use of land and air military incursions into the region.