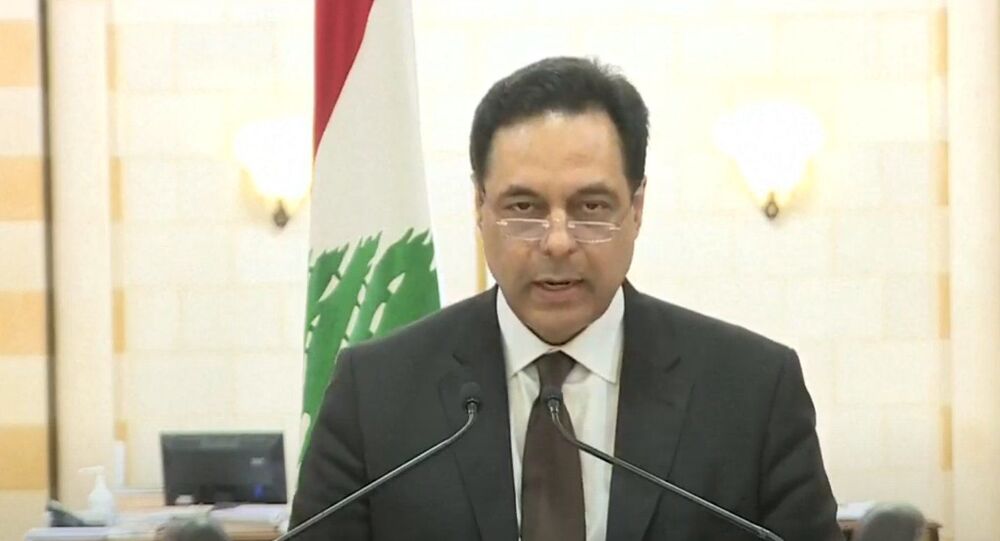 The announcement comes following the August 4 ammonium nitrate explosion in Beirut's port, which sparked large-scale protests and clashes in the Lebanese capital, and led to calls by protesters for the government to resign.

Lebanese Prime Minister Hassan Diab formally announced the resignation of his government, shortly after Health Minister Hamad Hassan confirmed its intention to do so on Monday.

In a televised address to the nation, Diab touched on the deadly Beirut explosion which rocked the city last week, saying that "the catastrophe that struck Lebanon is the result of terrible corruption in the country and the state; the system of corruption is bigger than the state itself. It immobilizes the state. The threat of other disasters exists because of the ruling class that controls the country," he said.

Calling on the "forces that protect the country" to work together, and saying the cabinet stands shoulder to shoulder with those seeking justice for the Beirut blast, Diab said his government tried, but failed, to improve the situation.

"We tried to work in honesty and transparency. We tried to create a transparent state, but unfortunately, once again, every time we try to take a step forward, we have been pushed back one step. We led a campaign against these forces - a campaign for change. We tried to bring about the change that the Lebanese people wanted, and because we don't want to be an obstacle in the way of change. This is the reason why we have tendered our resignation. Long Live Lebanon. May God Bless Lebanon and keep it from any further catastrophes," Diab concluded.

President Michel Aoun formally accepted the government's resignation Monday evening, asking it to continue to work in a caretaker capacity until a new cabinet could be formed.

The cabinet's resignation comes six days after the August 4 ammonium nitrate explosion in Beirut, which killed as many as 220 people and left nearly 6,000 injured, and caused up to $15 billion in damage to the capital. Residents organized protests on Thursday, with heavy clashes taking place in Beirut Saturday as demonstrators took control of some government buildings in running battles with police and the army. Protests continued Monday.

Diab, a Sunni Muslim and independent, succeeded Saad Hariri on January 21, 2020, and was designated prime minister by President Michel Aoun in the wake of large-scale protests engulfing the country in October 2019 over a range of problems, including endemic corruption, rampant unemployment, and fatigue from the country's political system, which requires guaranteed political representation for Lebanon's Shiite, Sunni and Marronite Christian communities in the executive and legislative branches of government.

In its time in office, Diab's government was unable to solve these issues, and problems were exacerbated as a result of the coronavirus pandemic, followed by an economic crisis and bank collapse, which forced Beirut to default on its debts in March.

Critics say the August 4 is evidence of the government's corrupt and ineffective nature, with the dangerous ammonium nitrate held at Beirut's port for nearly seven years before exploding. The dangerous substance was brought to the port aboard a Moldova-flagged tanker during a journey from Georgia to Mozambique, but got stuck along the way due to mechanical issues. Eventually, the chemical compound was transferred to a warehouse at the port. Local officials, businessmen and judges wrangled over the cargo's status for years, with efforts to sell it or transfer it to the Lebanese army proving unsuccessful.

Sam Heller, a Beirut-based analyst and advisor to the Brussels-based International Crisis Group think tank, says he doesn't expect Diab's resignation to have a significant impact on cooling tensions in Lebanon.

"The welling of anger and protest after Tuesday's Beirut port blast has now brought down Prime Minister Hassan Diab's government, but his government's resignation seems unlikely to quell popular outrage. After all, his government was just a creation of Lebanon's incumbent political forces. They remain atop the Lebanese system. So long as that same political cartel controls Lebanon, there has been no systemic change. I expect that most Lebanese will recognize that. No one will mistake Diab's resignation for real change," Heller explained in a commentary for Sputnik.

Real change may be on the way, the analyst suggested, based on the current political elites' poor track record, which "has governed the country into insolvency and failure." According to Heller, a large enough number of Lebanese people have now lost everything for some of them to become desperate enough to "refuse any surface modification of the status quo," and to "fight for more, whatever it costs them," including protests and, possibly violence.

"Yet they will collide with the country's incumbent political forces and those forces' loyalist constituencies, which can be expected to defend their interests. That collision could be unpredictable and dangerous," the observer warned.

"Real political change may be possible through parliamentary elections held under a new, less incumbent-friendly electoral law. But that would take time, and a willingness by the country's political forces to risk some of their prerogatives," Heller emphasized.