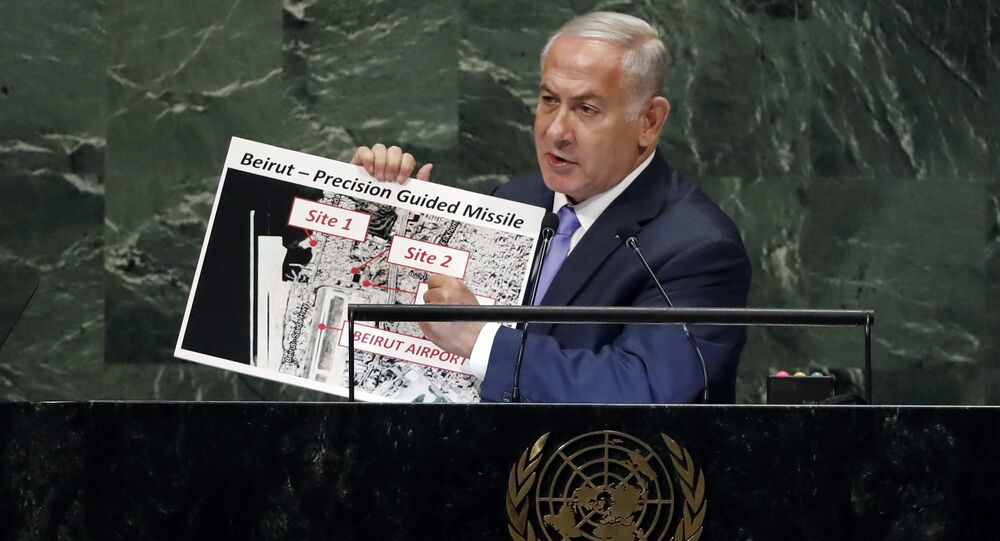 On Friday, Hezbollah leader Hassan Nasrallah dismissed allegations that his organization had any weapons at the Beirut port, and called for the Lebanese army to head the investigation into Tuesday’s disaster.

Lebanese political party and militant group Hezbollah may have sought to use the stockpile of ammonium nitrate which destroyed much of the area surrounding the port of Beirut for a new war against Tel Aviv, Israel’s Channel 13 has suggested in an assessment, citing no sources.

The report, released after Hassan Nasrallah made his first remarks in the wake of the 4 August explosion on Friday, suggested that “the material that exploded in the port is not new to Nasrallah and Hezbollah,” and pointed to the militant group’s previous alleged stockpiling of the substance in the UK, Germany, Cyprus, and other countries, as per allegations made by Mossad.

“Regarding what was stored in Beirut port, the assessment is Nasrallah intended to use it in the Third Lebanon War,” Channel 13 suggested. Israel and Lebanon have engaged in numerous skirmishes over the past three decades, and fought two major wars including the 1982 Lebanon War and the 2006 Lebanon War. Hezbollah acted as the main belligerent against Israeli forces in the latter.

The TV channel recalled that Nasrallah had threatened to fire rockets at an ammonia storage tank in the northern Israeli port city of Haifa in 2016 in the event of Israeli aggression. It also recalled Prime Minister Benjamin Netanyahu’s speech at the UN General Assembly in 2018, in which he accused the militia group of storing weapons in civilian areas in Beirut, and warned the militia that “Israel knows what you’re doing” and “will not let you get away with it”.

In connection with the blast, Channel 13 suggested that Nasrallah was now concerned about Hezbollah being implicated in a possible international probe.

© REUTERS / Khalil Hassan
Hezbollah Categorically Rejects Any Blame for Beirut Blast, Calls for Army to Handle Probe
In his speech Friday, Nasrallah categorically denied that the group had any weapons at the port, and promised that any objective investigation would show this to be the case. The militia leader proposed that the military, as an institution trusted by all sectors of Lebanese society, should be tasked with investigating the disaster, either by itself or in concert with other officials.

Ammonium nitrate is an industrial chemical which is mainly used as an agricultural fertiliser, but which can also be volatile and highly explosive, and has been used in car bombs and improvised explosive devices by militias and terrorist groups on a budget. It’s estimated that there were up to 2,750 tonnes of the substance stored at a warehouse at Beirut’s port when the explosion took place on 4 August. The cargo was reportedly brought to the port aboard a Moldova-registered cargo ship in 2013, with the ship and its cargo abandoned by a Cyprus-based Russian businessman named Igor Grechushkin. Since that time, local authorities and courts waged a bureaucratic battle to pass responsibility for handling the potentially dangerous cargo onto one another, with unsuccessful attempts made to reexport the ammonium nitrate, hand it over to the army, or to a private explosives company.

The disaster has claimed over 150 lives, with an estimated 100 people still missing, over 5,000 others injured, and as many as 300,000 residents of the Lebanese capital displaced. The blast is thought to have caused anywhere from $3 billion to $15 billion in damage, and observers estimate that it had an explosive yield of between 200 and 500 tonnes of TNT, i.e. about as much as a small tactical nuclear warhead.

Also on Friday, Lebanese President Michel Aoun said Beirut could not yet rule out the possibility of foreign involvement in the disaster, including the possibility that it may have been caused by a bomb or missile.