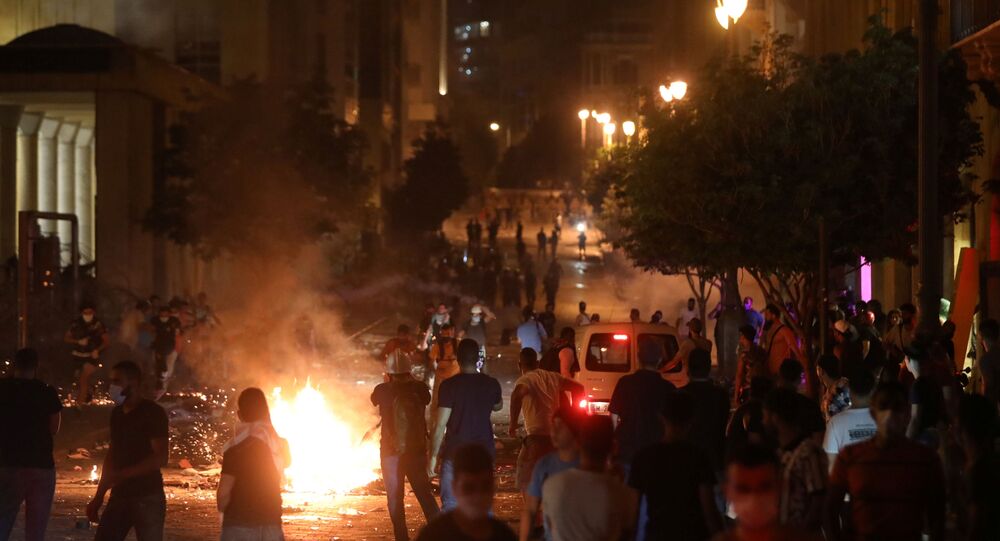 Anti-government demonstrations swept Beirut on Thursday, as protesters clashed with security forces in Lebanon in the wake of a deadly explosion that ripped through the capital on 4 August, killing at least 137 people.

Lebanese army is blocking the road to Parliament as protests and anger in response to the #BeirutExplosion grows. There is a small crowd, but army still using tear gas to disperse crowd. #Beirut_Explosion #BeirutBlast @TheWarMonitor @Natsecjeff @Almatrafi pic.twitter.com/QU5Gthd3gt

​Dozens of people, angered by alleged government negligence that resulted in the explosion of 2,750 tonnes of ammonium nitrate in a warehouse at the port, gathered near parliament, with officers resorting to using tear gas to disperse crowds.

​The explosion, which authorities claim was caused by the unsafe storage of the highly volatile chemical compound, destroyed whole districts of the nation's capital. The ammonium nitrate had been stored at the location since 2013, after it had been unloaded from a vessel sailing under a Moldovan flag that experienced technical difficulties while en route from Georgia to Mozambique, according to Shiparrested.com.

© AFP 2020 / -
Lebanese anti-government protesters scuffle with security forces in the Gemayzeh neighbourhood during the visit of French President Emmanuel Macron on August 6, 2020, two days after a massive explosion in the Beirut port shook the capital.

Some 5,000 people sustained injuries, and dozens remain unaccounted for.

As the investigation into the deadly incident continues, a number of port officials have been arrested, with some 16 people taken into custody, according to the state news agency.

According to the outlet, the head of the port was cited as claiming employees had previously written letters to authorities, seeking permission to sell or move the substance, which is used as a high-nitrogen crop fertiliser, but is also a component in explosives for mining and other industries.

The explosion on 4 August claimed at least 137 lives, leaving wide-spread devastation throughout the capital. The city's hospitals overflowing with patients wounded in the blast.

According to Public Health Minister Hamad Hassan, there was a shortage of beds and equipment necessary to treat the injured and those in critical condition.

Officials previously suggested the blast was caused by 2,750 tonnes of ammonium nitrate in the city port that, according to Lebanese Prime Minister Hassan Diab, detonated due to lack of due safety measures.

In 2013 a Moldovan-flagged ship, the Rhosus, entered Beirut port over reported technical problems.

​Upon inspection, the vehicle carrying the substance was barred from sailing further and was shortly afterwards abandoned by its owners. The vessel’s cargo included the highly-flammable ammonium nitrate, which was subsequently stored in a port warehouse.

Port General Manager Hassan Koraytem was cited as telling OTV that when a court initially ordered that the substance be stored in the warehouse, the authorities had been aware it was dangerous, "but not to this degree".

On the ‘Brink of Survival’

As the probe into the incident continues, security forces have sealed off a wide area around the site, while rescuers continue to sift through the rubble, searching for survivors.

According to Beirut's governor Marwan Aboud, some 300,000 people have been left homeless by the explosion.
The disaster has compounded the challenges the Lebanese government has been facing amidst the COVID-19 pandemic and the country’s economic crisis.

The destruction of its main logistics hub has dealt a crippling blow to a country which imports some 70 percent of its raw materials and the products it consumes.

On Tuesday night, the Ministry of Transport announced that the bulk of goods would now have to be channelled through the port of Tripoli, the capacity of which is only a fraction of that of Beirut.

Following a request for help issued by the Lebanese authorities, countries have been rushing to extend aid to the nation in the aftermath of the disaster.

Russia’s Emergencies Ministry is sending five aircraft to airlift an airmobile hospital, doctors, rescuers from the airmobile unit Tsentrospas and a Rospotrebnadzor laboratory to detect COVID-19.

Germany has also dispatched dozens of search and rescue specialists to Lebanon to look for survivors trapped beneath rubble of the blast, reported AP.