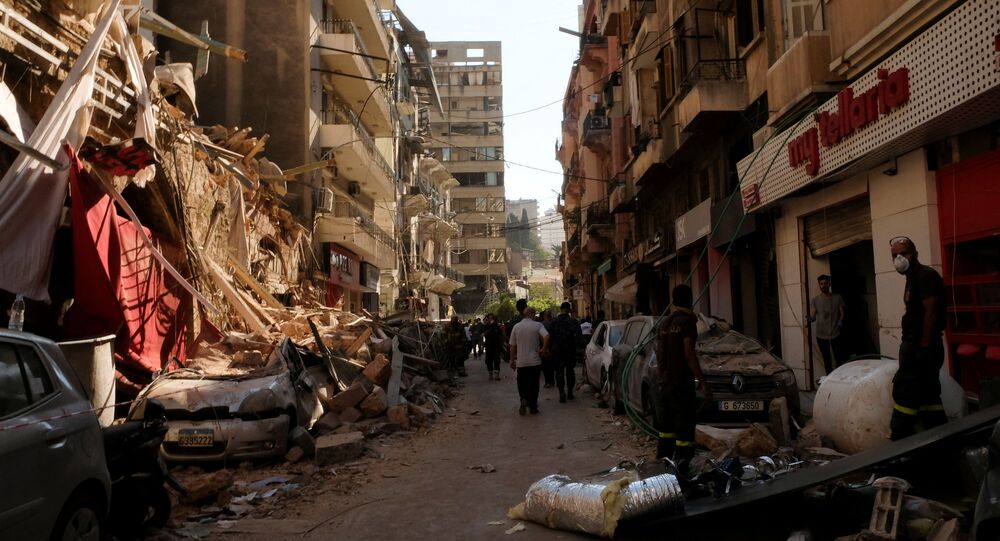 Explosion in Beirut Had Power of Several Hundred Tonnes of TNT, Scholars Claim

The explosion in the Lebanese capital killed at least 100 people and injured several thousand, also leaving 300,000 without shelter. According to preliminary reports, the tragedy was caused by 2,750 tonnes of ammonium nitrate, an explosive chemical compound stored in the port.

The deadly blast in the port of Beirut, which the mayor of the city compared to Hiroshima and Nagasaki in 1945, had an explosive yield of several hundred tonnes of TNT equivalent, Business Insider reported, citing weapons experts.

According to Jeffrey Lewis, a nuclear and conventional weapons expert at the Middlebury Institute of International Studies in California, he estimated the yield to be between 200 and 500 tonnes, "looking at blast damage, the shockwave, seismic signals and the size of the crater".

Footage of the massive explosion at #Beirut port a short while ago. It's truly frightening. #Lebanon pic.twitter.com/OZ0hZ5SwlC

​​While some compared the explosion to a nuclear strike, claiming the yield reached to be one to two kilotonnes, the researchers stressed there is a considerable difference between nuclear blasts and the chemical ones.

Professor Ramesh Thakur, who is Director of the Centre for Nuclear Non-Proliferation and Disarmament in the Crawford School, The Australian National University and co-Convenor of the Asia-Pacific Leadership Network for Nuclear Non-Proliferation and Disarmament, tells Sputnik that the blast in Beirut became one of the biggest non-nuclear explosions in history, "with the explosive power amounting to almost one-tenth of the A-bomb dropped on Hiroshima".

"Ironically, the Beirut blast occurred only one day short of the 75th anniversary of Hiroshima. That said, the analogy with Hiroshima is so misleading as to amount to hyperbole. Firstly, an entire storage depot of explosives is not the same as the explosive power of just one bomb. Secondly, 135 killed and 4,000 injured is in no way comparable to 80,000 killed on Aug. 6, 1945 with tens of thousands more dying from burns and radiation poisoning over following months and years", Thakur explains.

According to Gotz Neuneck, a professor of physics and deputy director of the Institute of Peace Research and Security Policy at the University of Hamburg, 2,750 tonnes of ammonium nitrate "is comparable to a nuclear weapon explosion of 1-2 kt but without heat damage or radioactive fallout".

"It was an enormous chemical explosion in Beirut. The damage was done by a shockwave. A typical nuclear weapon has much more effects beyond the shockwave and includes heat, neutron radiation and fallout", Neuneck says.

Lebanese Prime Minister Hassan Diab previously blamed the devastating blast on a huge stockpile of ammonium nitrate, an agricultural fertiliser left in the port since 2014. The explosion inflicted damage of around $10-15 billion on the city and was registered as a 3.3-magnitude earthquake, with the effects of the explosion felt by people miles away from the blast site.