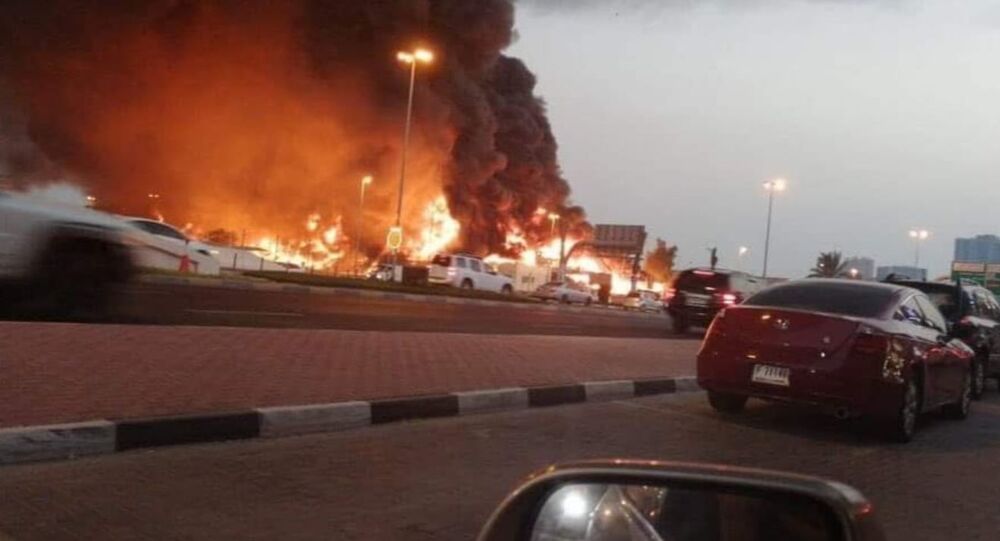 Massive Fire Breaks out at Market in Emirate of Ajman, UAE, Reports Say

Massive fires are not uncommon in the UAE in the summer, when the daytime air temperature rises above 50 degrees Celsius.

A major fire broke out in a marketplace in an industrial zone in the Emirate of Ajman in north-eastern UAE on 5 August, the Emirati newspaper Al Khaleej reported.

According to The National, the blaze erupted at the market at about 06:30 p.m. local time (14:30 GMT). The area has been closed for several months as part of measures to prevent the spread of COVID-19.

Ajman Civil Defence took the fire under control at about 9 p.m. (17:00 GMT), The National reported. Crews from Dubai, Sharjah and Umm Al Quwain were assisting local emergencies services, it said.

Photos and videos of black clouds of thick smoke rising into the sky from the severe fire, covering a large area, have emerged on social media platforms.

There are no reports of casualties or damages caused by the fire.

This fire is in Ajman .. ffs what’s going on with the world!! pic.twitter.com/Wbaet4wtqe

DEVELOPING: Massive fire breaks out at market in Ajman, United Arab Emirates; no word yet on cause or injuries

The UAE has suffered a spate of fires in its high-rises, especially in the hot season, when the air temperature exceeds 40 degrees Celsius (104 degrees Fahrenheit). One of the strongest blazes broke out on New Year's Eve in 2016 in a high-rise hotel in the business centre of Dubai while organising New Year's fireworks.​