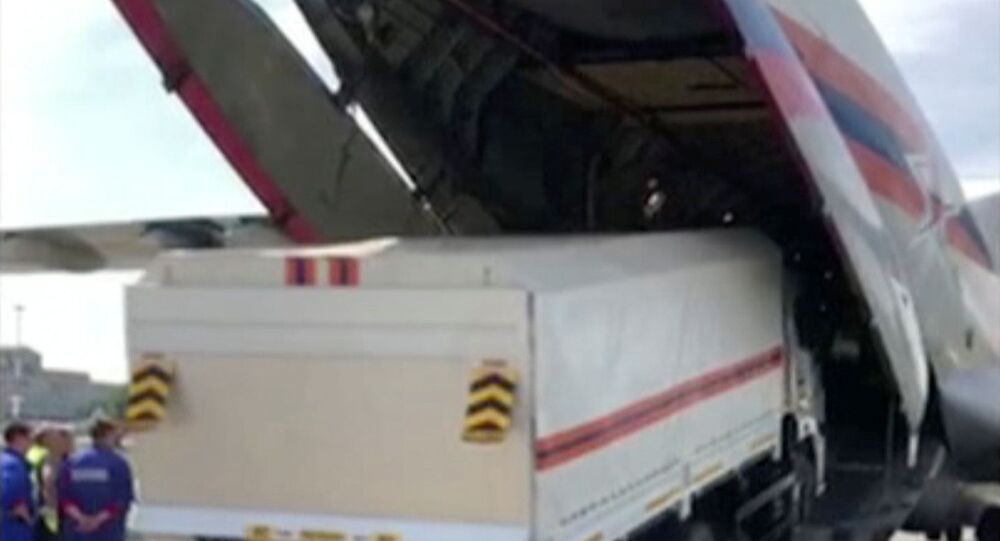 The deadly explosion, which levelled the Lebanese capital's port and severely damaged nearby areas, left at least 80 people dead and thousands more injured. The city's hospitals are filled to the brim and countries around the world are rushing to offer their assistance.

Russia's Ministry of Emergency Situations has announced that the first of its planes loaded with humanitarian aid for Beirut, intended to help local authorities cope with the aftermath of the 4 August blast, has lifted off and is en route to its destination. The ministry added that four more planes with aid will be sent within a day, with the total number of Russian specialists expected to arrive in Lebanon amounting to some 150 personnel.

The first cargo plane, an Il-76 aircraft transporting a mobile hospital and a first response team, has already arrived in the country. The third aircraft, a Sukhoi Superjet, will bring a team of psychologists and members of the "Centrospas" - a dedicated mobile emergency response team that focuses on finding and rescuing survivors in catastrophes and disasters of all kinds.

The fourth and fifth planes will also bring more of the ministry's personnel, emergency teams, and special equipment for managing the consequences of the explosion.

Russia's help extends beyond just assisting the Lebanese authorities with rescuing possible survivors and treating the wounded. The second plane flying from Russia to Beirut will bring a team of 15 epidemiologists, along with a mobile field laboratory, the ministry said. Their goal will be to prevent an uncontrolled spread of the coronavirus infection amid the chaos of the blast's aftermath and Beirut's overloaded hospitals.

This form of aid was specifically requested by Lebanese officials, Russia's Federal Service for the Oversight of Consumer Protection and Welfare said earlier in the day. The two countries' foreign ministries have been coordinating their steps in regards to how Moscow can help Beirut cope with the tragic incident, the Russian ministry stated.