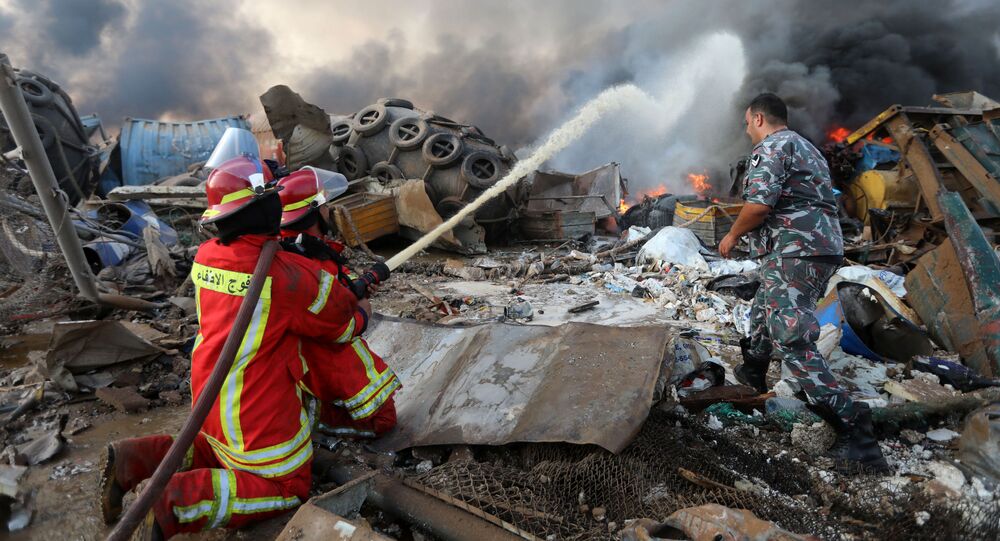 Repair Work at Beirut Port Hangar May Be Cause of Explosion, Lebanese Defence Council States

DOHA (Sputnik) – A meeting of the Lebanese Supreme Defence Council said that a massive blast in the port of Beirut on Tuesday evening might have been the result of maintenance work at the site, as a door to the port hangar, where explosive materials were being stored, did not close properly, LBCI reported.

"[Some] 2,750 tonnes — the amount of that ammonium exploded in the port of Beirut — is material that was seized in 2014 from the Rhosus dry-cargo ship, registered in Moldova, when it was heading to Africa and suffered damages during navigation", the Defence Council said at an emergency meeting following the blast, as cited by the local broadcaster LBCI.

During the meeting, representatives of the Lebanese security service said that an explosion took place as a door was being welded, the channel reported. It was discovered some time ago that the hangar’s door was not properly locked, and there was a gap by the wall, which made it easy to both enter and leave the hangar, the emergency meeting of the defence council said.

"A spark led to the burning of explosive materials in the hangar that then led to a blast of 2,750 tonnes of ammonium nitrate, which is equivalent to 1,800 tonnes of TNT", Lebanese officials said.

Following the tragic incident, the city's governor said that half of Beirut's buildings were damaged, and hospitals were overcrowded due to a large number of injured people. Over 80 people were killed and some 4,000 injured. The Lebanese government has declared three-day mourning for the victims of the tragedy starting Wednesday.

In 2014, the Rhosus cargo ship's owner abandoned the vessel in Beirut, meanwhile high-risk goods – in particular, ammonium nitrate, which was prohibited from being unloaded or transferred to another vessel by Beirut's port authorities – remained in the hold. The cargo stored in the ship was then transported to an appropriate place, but, eventually was moved to hangar 12 at the port.