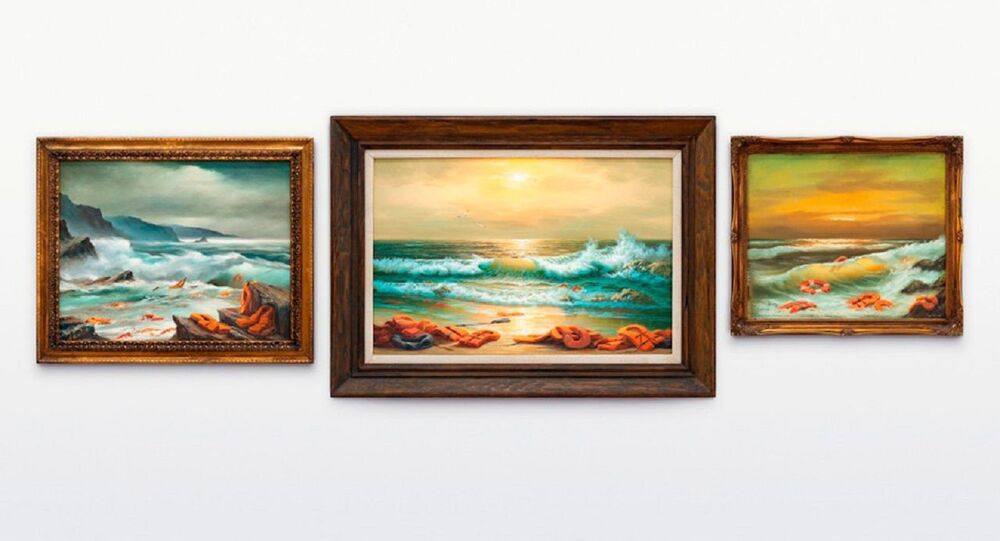 The triptych ‘Mediterranean Sea View 2017’, showing orange life vests washed up on the shore of the Mediterranean Sea in reference to Banksy’s judgement on Europe’s response to the refugee crisis, was initially displayed in the Walled Off Hotel built by the artist in the Palestinian city of Bethlehem alongside the Israeli West Bank barrier.

Anonymous England-based street artist Banksy’s ‘Mediterranean Sea View 2017’ triptych has raised almost $3 million at a Sotheby’s ‘Rembrandt to Richter Evening Sale’ auction on Tuesday, with the proceeds being donated to a Palestinian children’s hospital in Bethlehem in the West Bank.

The money was said to have been donated by Banksy to build a new acute stroke unit and obtain children's rehabilitation equipment for the Bethlehem Arab Society for Rehabilitation (BASR), according to the Sotheby's web-site.

The artwork, which addresses the European refugee crisis in recent years, was first displayed in the Walled Off Hotel designed by co-founder Banksy in the city of Bethlehem in 2017. The triptych features orange life vests washed up on a rocky shore of the Mediterranean Sea.

Can anyone lend me £1.2m?
"Banksy auctions refugee painting to aid Bethlehem hospital: The triptych Mediterranean Sea View 2017 will go under the hammer at Sotheby's after the artist donated them to help the children's hospital."https://t.co/z1RIz1dA72 pic.twitter.com/0LszAtlSem

“This work juxtaposes an historic fine art genre with grim contemporaneity,” Sotheby’s said in its sales listing for the artwork. “Though posing as eighteenth or nineteenth-century paintings of the ‘Natural Sublime’, the present work undermines and subverts the viewer’s expectations to broach a difficult contemporary issue.”

The elusive and still anonymous UK-based street artist commented a rare public remark on the piece, expressing his personal thoughts on the dark and light sides of migration.

“We’re often led to believe migration is a drain on the country’s resources, but Steve Jobs was the son of a Syrian immigrant,” Banksy said. “Apple is the world’s most profitable company […] and it only exists because they allowed in a young man from Homs.”