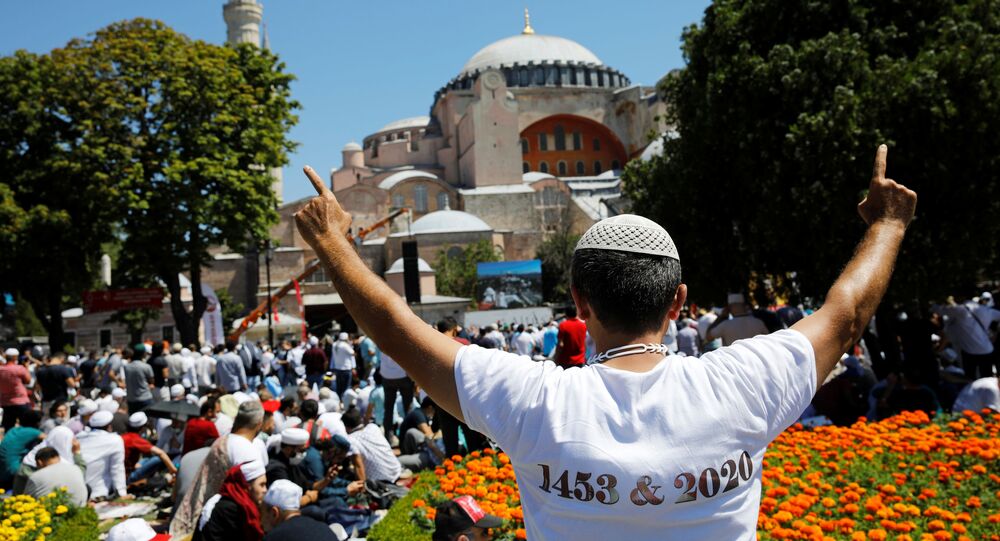 Hagia Sophia and Its Turbulent History of Conversions

Eastern Christian, Catholic, Muslim and then secular – Hagia Sophia has played many roles throughout its nearly 1,500-year history. But following a Turkish court decision last week, this grand structure that has been serving as a museum for 85 years, has now been reconverted into a mosque.

On Friday, Istanbul’s Hagia Sophia opened for Muslim prayers for the first time since its reconversion from a secular cultural building back into a place of worship. The move was strongly opposed by the heads of Christian churches worldwide. And this is not surprising, bearing in mind its rich history and the significance it bears for a number of religious denominations around the world.

Hagia Sophia, also known as Church of the Holy Wisdom, was built from 532 to 537 on the orders of Byzantine Emperor Justinian I as an Orthodox Christian cathedral in place of two churches that were previously erected on the site. Throughout the Byzantine period, it saw some additions of mosaics and even some structural modifications, adding to its status as the greatest church in the Eastern Roman Empire.

The building suffered some damage from several earthquakes and fires in the first five centuries of its existence. It had to undergo several reconstructions and then fall victim to the Crusaders as it was desecrated and stripped of many of its metal ornaments in the early 13th century.

In 1204, Hagia Sophia was briefly converted into a Roman Catholic cathedral during the Latin occupation of Constantinople which lasted until 1261, when the city came under the control of the Byzantine emperors again. They had to pour large finances into its reconstruction to restore the building to its former status.

© REUTERS / Murad Sezer
Hagia Sophia or Ayasofya, a UNESCO World Heritage Site, that was a Byzantine cathedral before being converted into a mosque which is currently a museum, is seen in Istanbul, Turkey, June 28, 2020

In 1452, a short ecclesiastical union between the Eastern Orthodox and western Catholic Churches was established in Hagia Sophia until the city was captured by the Ottoman Empire the next year.

Hagia Sophia, known to Turkish speakers as Ayasofya, was converted into a mosque on the orders of Sultan Mehmed in 1453. The conquering ruler also commissioned the building’s renovation following damage and looting committed by Ottoman forces during the siege. A minaret and mihrab were now also built at the site to bring the building in line with Islamic tradition.

Hagia Sophia remained a sight of Muslim worship for the next five centuries. It underwent its next extensive renovation in 1847 with its exterior décor and interior being substantially revised.

As the city was renamed Istanbul by Mustafa Kemal Atatürk in 1930, so Hagia Sophia soon lost its status as a religious site, becoming a museum.

The building was transformed into a secular museum by the founder of the Republic of Turkey and the first Turkish President in 1935. It remained a home to Holy relics and a large collection of Byzantine icons. In 1985, the site was placed on the UNESCO World Heritage Sites list.

Since Hagia Sophia’s conversion into museum, a number of pleas were made to reverse this decree and make the site again a place of religious worship – Christian or Muslim, depending on who was making a call. Turkish president Recep Tayyip Erdoğan has been speaking about turning the museum back into mosque since 2018, a move that was praised by many Turkish Muslims.

On 10 July, Turkey’s Council of Sate annulled the decision to make Hagia Sophia a museum, eventually turning it into a mosque again and not “for any other purpose”. The Ministry of Culture and Directorate of Religious Affairs later signed a protocol confirming that Hagia Sophia will be preserved as a global heritage site.

© REUTERS / Murad Sezer
People gather in front of the Hagia Sophia or Ayasofya, after a court decision that paves the way for it to be converted from a museum back into a mosque, in Istanbul, Turkey, July 10, 2020

The reconversion was denounced by the Russian Orthodox Church, and the heads of the Roman Catholic Church Pope Francis and Greek Orthodox Church Archbishop Ieronymos of Athens and All Greece, with the letter dubbing the move a “provocation”.

Turkey, however, insists that any decision made in regards to Hagia Sophia’s status should be regarded as the country’s “internal” affair.