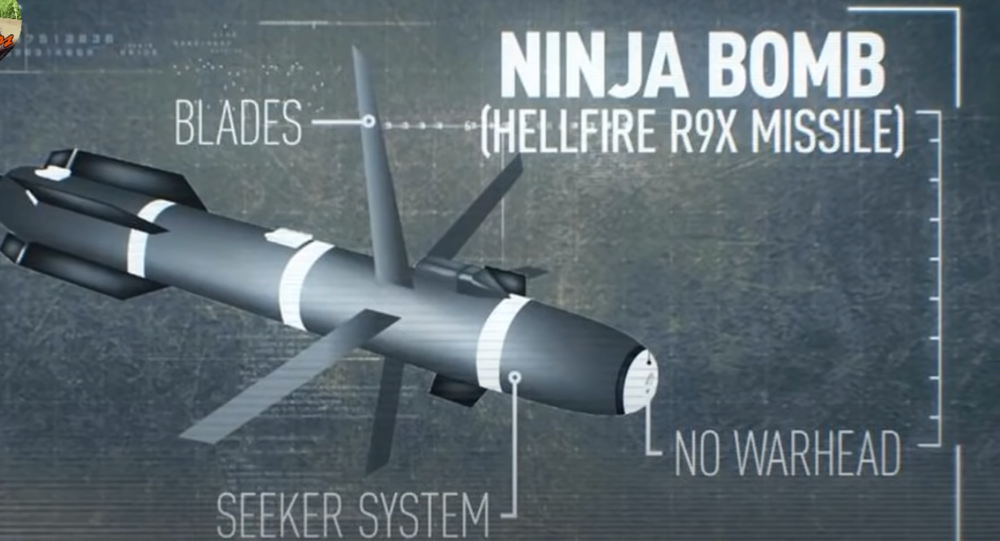 New reports out of the Middle East allege that the use of the US’ sword-carrying Hellfire R9-X “ninja bomb” has increased in recent weeks, and that it was most recently used in a Monday attack on alleged terrorists in northern Syria.

The Jerusalem Post reported on Tuesday that an R9-X missile struck a small, white truck the day prior and killed several individuals near Azaz, Syria.

Images uploaded to social media by independent outlet Islamic World News showed what is believed to be the remaining wreckage from the scene.

#Syria
Unidentified drones targeted a vehicle north of the village of #Ihtimlat, east of #Azaz by a R9X Hellfire missile.

3 people were killed in the attack, but the identities of these individuals are unknown. pic.twitter.com/n94gGhiZL1

Though little is known about the Monday strike, the Jerusalem Post noted that early reports have identified one of the strike victims as Shuja’a Muhammad, who was reportedly born in 1987. Members of the White Helmets were observed picking up parts of the corpse, according to the Post.

At the same time, the outlet highlighted that “people sometimes use fake identification,” meaning the ID retrieved from the scene may not provide the actual name of one of the people who was killed.

Despite its name, the so-called “ninja bomb” does not come equipped with explosives, but instead six steel, sword-like blades that have the ability to slice through targets. The precision missile also cuts down on collateral damage - which could explain its increased use in the Middle East.

“The less lethal the weapon the smaller the area that is exposed to danger, even if the weapon fails to guide properly,” retired Air Marshal Greg Bagwell, a former UK Royal Air Force deputy commander, explained to The Telegraph last month.

“As you shrink that envelope there is the temptation to take shots in a situation you would not have been able to with a more lethal weapon.”

The Jerusalem Post noted that strikes using the “ninja bomb” occurred on June 15, June 20 and on July 18. Video footage uploaded to social media provides a look at the precision of a strike in Syria last month that killed commanders Qassam ul-Urdini and Bilal al-Sanaani of the al-Qaeda-linked group known as Horas al-Din.

A US strike kills a notable al-Qaeda leader in Syria. A video of the car he was in. pic.twitter.com/5qtVukN5O1 modern weapons!

Chris Cole, director of the nongovernmental organization Drone Wars UK, noted that while the R9-X missile is billed as a munition that will cut down on collateral damage, unsuccessful precision strikes are generally downplayed by military officials.

“We never see the images of near misses or complete misses. That feeds the Hollywood idea of air warfare where every missile hits its target 100 percent of the time.”

Over 7,300 Polling Stations Open for Elections to Syria's 250-Seat Parliament