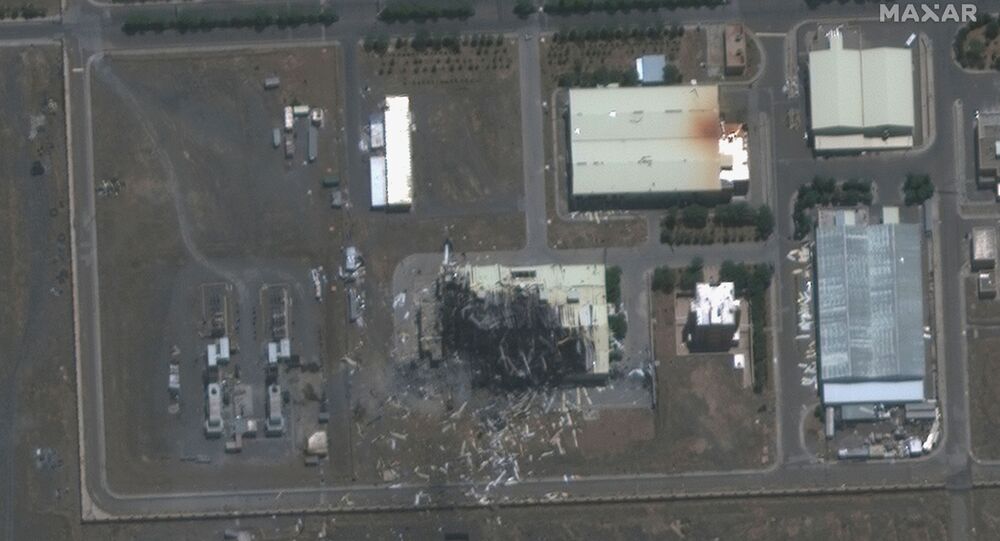 The blast occurred a few weeks after an explosion ripped through Iran's Natanz facility for enriching uranium, in an incident that was reportedly caused by a bomb.

The news outlet cited Saeid Mohseni, chief executive of Esfahan Power Generation Co., as saying that the blast did not disrupt the plant's electricity supply to customers.

"The damaged equipment is being repaired", he said, adding that the power station resumed operations about two hours after the explosion.

The incident reportedly took place due to a technical problem at the plant and did not cause any casualties.

This came after a blast occurred at the Natanz nuclear facility in Iran in early July, with the country’s Atomic Energy Organisation stating at the time that the facility "is operating as usual", since the reactor was not damaged in the explosion and there were no casualties following the incident.

© REUTERS / Handout .
A handout satellite image shows a general view of the Natanz nuclear facility after a fire, in Natanz, Iran July 8, 2020

Tehran pledhed to announce "the main cause" of the explosion "at a proper time", warning that if it finds out "foreign elements" were behind the incident, they will face consequences.

Earlier, The New York Times reported, citing an unnamed Middle East intelligence official, that the Natanz blast was caused by an "explosive device planted inside the facility". The report was followed by the Kuwaiti daily al-Jarida citing an unnamed "senior" source as saying that the explosion was Israel's work.

The incident followed an explosion ripping through the Parchin military complex located about 30 kilometres (18 miles) from the Iranian capital Tehran late last month, in what Iranian authorities said was the result of "leaking gas tanks".