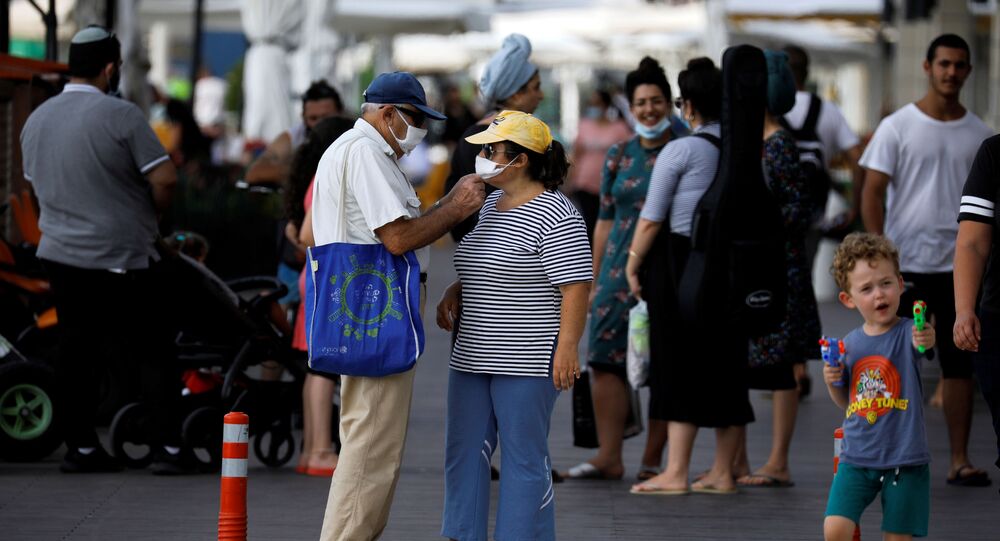 Israel has been praised for the way it handled the outbreak of the pandemic in late February, but now, with the virus still raging, claiming more lives than before and causing significant economic damage, Israelis have started questioning whether their government has done enough.

Protests amid the raging coronavirus have become a regular phenomenon in Israel. On Tuesday hundreds of artists, media people, activists and ordinary Israelis took to the streets of Tel Aviv and Jerusalem, venting anger at the way the country's government was handling the pandemic that has already claimed the lives of more than 360 people.

More demonstrations are being planned in the upcoming days, and a recent poll suggests that 49 percent of Israelis believed Prime Minister Benjamin Netanyahu and his government failed to tackle the rising challenge, a significant increase from last month's survey, that indicated that only a third of those asked have been dissatisfied with his policies.

Primary sources for the public's frustration stems from the fact that Israeli politicians, who still can't agree on a unified policy, have been sending mixed messages to the public on what was permissible and what wasn't; while restrictions that have been imposed were largely inconsistent and illogical.

One of the most obvious examples of these illogical moves was the recent decision to shut down public gyms and pools, while letting hotels keep their facilities open.

Another example was the way the police enforced the government's decision and fined people for not wearing masks on the streets, without checking the situation on public transport, where violations have been massively reported by the Israeli media.

Inconsistency has also been felt in the decision to lock and unlock the country, a move that sparked a barrage of criticism from Israel's media, experts and individuals.

During the first wave of the pandemic that erupted in Israel in February, Israel was swift to introduce lockdowns on entire towns and cities; it closed down its airport, governmental offices, businesses and institutions, despite a relatively low number of infections.

However, amid the second wave, when numbers have spiked, the government has been dragging its feet and failed to introduce strict measures that would curb the spread of the virus.

Schools, for example, that have become the hub of the pandemic remained opened; despite the fact that students and staff were obliged to wear face masks, busses transported crowds of people, wedding halls continued to offer their services to the masses without limiting the number of attendees, and the police were inefficient in enforcing restrictions.

But inefficiency was also felt in the way Israel handled the process of testing potential patients.

Mass testing was not offered to the general public and the initial process of applying for a checkup was long and at times complicated. As numbers of patients kept climbing, the demand for tests has gone up too, putting additional pressure on the system and causing multiple mistakes in final results.

Some, for example, were wrongly put under quarantine, and forced to stay home instead of being at work. Meanwhile, others, who ended up testing positive for the virus -- were allowed to roam freely, infecting the masses.

Despite the fact that Israel has the equipment to handle high numbers of patients, if the situation continues to deteriorate, its doctors, who have long complained about lack of staff, depleted resources, "insane hours" and long shifts, might find themselves working around the clock, adding to the public's general frustration with the system.

Economic cushion? Not that fast

Yet, Israel's problems didn't stop there; and public anger was also directed at the way the country was handling the economic crisis that erupted as a result of the pandemic's fast spread.

Although unemployment rates have reduced significantly, sinking from the previous 21 percent that was registered in May to slightly more than 10 percent in mid-June, for a country where the proportion of jobless people rarely exceeded 5 percent, that number is still alarming.

Similarly alarming was the financial security net offered by the government to keep those who have lost jobs and businesses afloat.

Pledging to pour in $26 billion in assistance, the economic plan has already drawn criticism from experts and individuals, who warned that the money offered was way too little, came too late and was distributed too unevenly.

Despite being  confirmed and passed by the government, the assistance plan still needs the approval of the Knesset before the cash is released from the country's budget. While Israeli decision makers, who are set to convene later today, are struggling to come to terms with one another, many in Israel feel it will be them, ordinary citizens, who will be paying the price for the state's inefficiency.