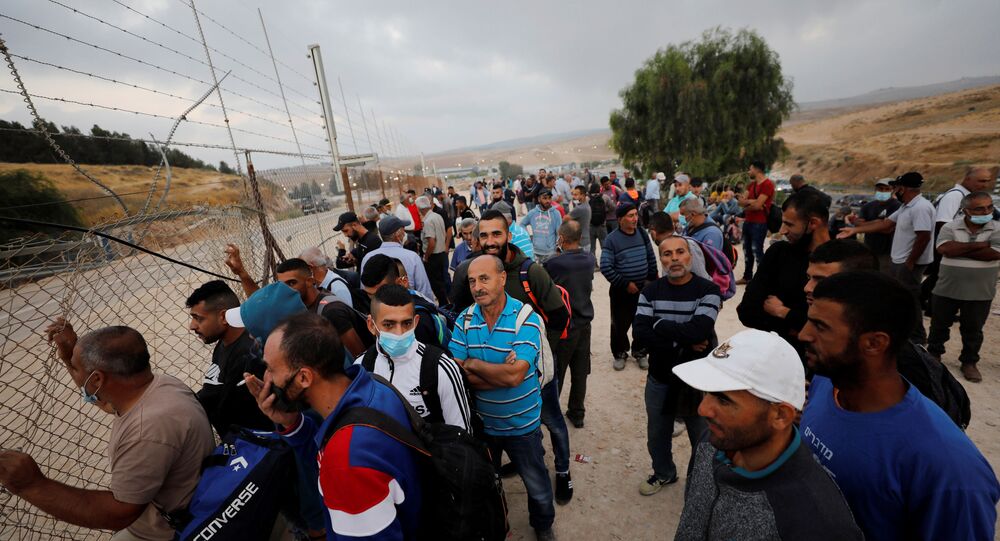 Just as in neighbouring Israel, which has recently seen a spike in COVID-19 cases, the Palestinian Authority is experiencing the same challenges. But unlike the Jewish state, where citizens are given social and medical assistance, PA residents, who don’t have such support, are being asked to cope on their own.

The lockdown imposed on the West Bank over the raging coronavirus is to be lifted on Monday unless the Palestinian Authority decides to extend the strict measures imposed to block the spread of the pandemic.

So far the disease, which erupted in mid-March, has claimed the lives of 35 Palestinians. In total, more than 6,600 have been diagnosed with the virus, most of whom are from the West Bank.

One of the disease's epicentres is the city of Hebron, located 30 km south of Jerusalem. Last week, the situation there was so alarming that Health Minister Mai Al Kaila said it had spiralled "out of control", with the city registering more than 80 percent of all infections.

Being a commercial hub with a population of 750,000 people, Hebron regularly sees a high stream of people who come to the city for work, worship, and pleasure.

But being PA's largest governorate is just one of the explanations for the spread of the virus. Another reason is the constant movement of Palestinian workers from Hebron to Israeli territories.

© REUTERS / Mussa Qawasma
A healthcare worker swabs the nose of a Palestinian worker for the coronavirus disease (COVID-19) testing upon his return from Israel, outside the Israeli-controlled Meitar checkpoint, near Hebron in the Israeli-occupied West Bank April 7, 2020.

Out of the 150,000 Palestinians who work in Israel, about half reportedly come from the city of Hebron. Many of them are employed in agriculture and construction.

Now, with the re-eruption of the virus, their jobs are at risk, especially given that Palestinian Prime Minister Mohammed Al Shtayyeh asked Israel to seal its crossings with the PA to prevent the spread of the disease, a request that hasn't been answered yet.

However, if his plea ends up being answered, thousands of Palestinian workers, who rely on Israeli jobs, will be dealt a severe blow.

Mohammed Jaradat, a 38-year-old construction worker from Hebron, might just be one of those affected by the decision. Now forced to stay at home as a result of the lockdown, he says it will be virtually impossible for him to put food on the table and cater to the needs of his six children if restrictions are not lifted.

"If the situation continues, we will all end up losing our jobs, something that will eventually lead to starvation as the authorities, who don't have a strategic plan on how to contain the spread of the virus, will not provide us with any assistance".

Even before the outbreak of the pandemic, the PA was suffering from high unemployment rates that reached 14 percent at the end of 2019. Poverty rates registered a similar figure and now reports, citing the World Bank, suggest that the situation will deteriorate even further, pushing the numbers to unprecedented heights.

To make matter worse, the Palestinian Authority which hasn't provided its citizens with assistance packages in the past, didn't rush to make any statements on providing citizens with financial aid during the pandemic, and most efforts have been thrown into securing international donations to keep the economy afloat.

In April, the US ambassador to Israel announced his country would grant the PA some $5 million for Palestinian hospitals and households "to meet immediate, life-saving needs in combating COVID-19".

© REUTERS / Mussa Qawasma
Palestinian labourers, who were not able to cross into Israel for work, stand by a fence near an Israeli checkpoint that was closed amid fears of a second wave of coronavirus disease (COVID-19) infections, near Hebron in the Israeli-occupied West Bank 29 June 2020.

Similar pledges have been made by other international players, with the EU announcing the injection of $25 million a week ago to assist the more vulnerable layers of the population.

Ramallah has also received cash from Israel, who understands the need to stabilise the situation in the West Bank to avoid a potential spillover. In March, for example, it received some $35 million in tax revenues and a month later a loan of $145 million. For the PA, whose total budget in 2018 stood at roughly $5 billion, this money is not peanuts.

However, Mohammed says the cash that streamed in was not felt on the ground. "The government got tonnes of money but it wasn't routed in the right direction. They introduced strict measures and prevented us from moving freely but they didn't provide us with a financial cushion to withstand this challenge".

Nor did the PA help improve medical equipment in local hospitals whose resources were depleted well before the eruption of the disease.

Although special treatment centres were opened in most Palestinian hospitals, with all employees and visitors required to wear face masks, essential equipment is still a rare commodity in many medical institutions across the West Bank.

The city of Hebron, for example, only has 35 ventilators. For a place that has registered more than 80 percent of all cases, this amount is only a drop in the ocean.

"We know that abiding by the instructions given by the ministry of health and adhering to the precautionary measures will keep the virus at bay", said Mohammed referring to the obligations to wear face masks, maintain social distancing, and stay away from Israeli settlements. "But the tough economic conditions don't really leave us an option, forcing us to break the rules our government has set", he explained, adding that despite the recent high approval ratings, the PA government has not done enough to defend the defenceless.

"The entire system [of the PA - ed.] is preoccupied with internal struggles, with various actors trying to kill each other politically; and who pays the high price? It is us, ordinary citizens".