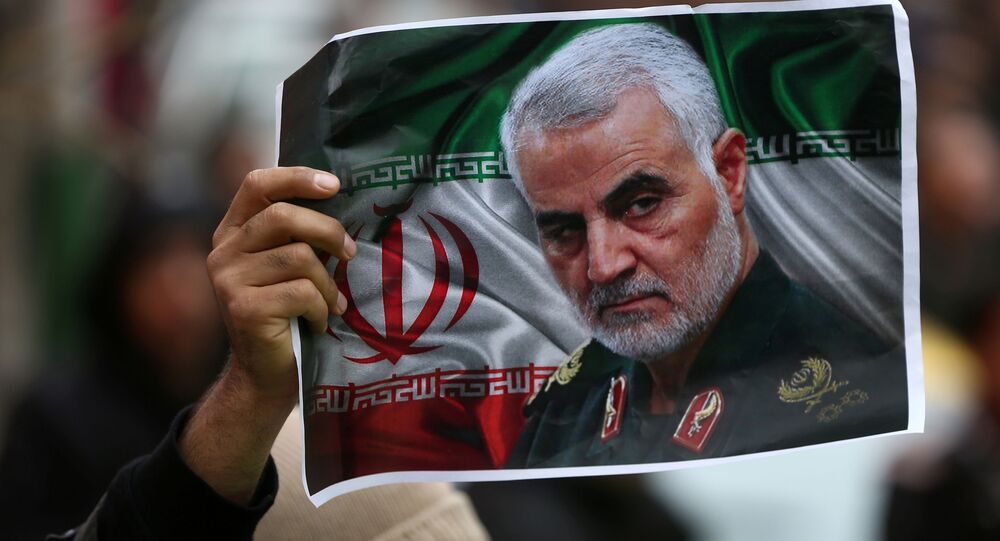 The 3 January killing of Qasem Soleimani escalated tensions between Tehran and Washington which have been simmering since the unilateral US withdrawal from the 2015 Iran nuclear deal in 2018.

Iran’s Ambassador to the United Nations Majid Takht Ravanchi has condemned January’s assassination of top Iranian general Qasem Soleimani by the US as an apparent example of a state terrorism.

Soleimani’s killing “is seen as a criminal terrorist act by any standard”, Ravanchi underscored in a letter to UN Secretary General Antonio Guterres on Saturday.

The envoy praised Soleimani’s “key role in helping the people and governments of some regional countries, at their own request, to defeat the most dangerous terror groups such as ISIS [Daesh*] and other groups designated as terror organisations by the UN Security Council”.

Ravanchi claimed the “illegal and […] adventurous move” by the US to assassinate Soleimani indicates that “Washington’s claim of fighting terrorists is a hollow one”.

"In fact, the United States is fighting those who are combating terrorists", he pointed out, blaming Washington for pursuing a "hypocritical policy" that "undermines regional and international efforts in the war on international terrorism".

He stressed that the international community "must appreciate the efforts and sacrifices" made by Soleimani and al-Muhandis in the fight against terrorism in the region.

This came after Iranian authorities approved a measure to ask Interpol to put US President Donald Trump on its international red notice of wanted persons over Soleimani's killing. However, an Interpol spokesperson said that the agency would not agree to any Iranian request if one was made, citing a prohibition for undertaking "any intervention or activities of a political, military, religious or racial character".

Qasem Soleimani, commander of Iran’s Islamic Revolutionary Guard Corps’ elite Quds Force, was killed on 3 January in a US drone strike at the Baghdad International Airport authorised by President Donald Trump who claimed that Soleimani allegedly planned "a big attack" on the US.

The strikes caused no deaths or serious injuries, but the Pentagon has since reported that at least 109 US servicemen have been diagnosed with traumatic brain injuries.

The Tehran-Washington tensions have been in place since May 2018, when Trump announced the US was unilaterally withdrawing from the 2015 Iran nuclear deal, also known as the Joint Comprehensive Plan of Action (JCPOA), reinstating harsh economic sanctions against Tehran.