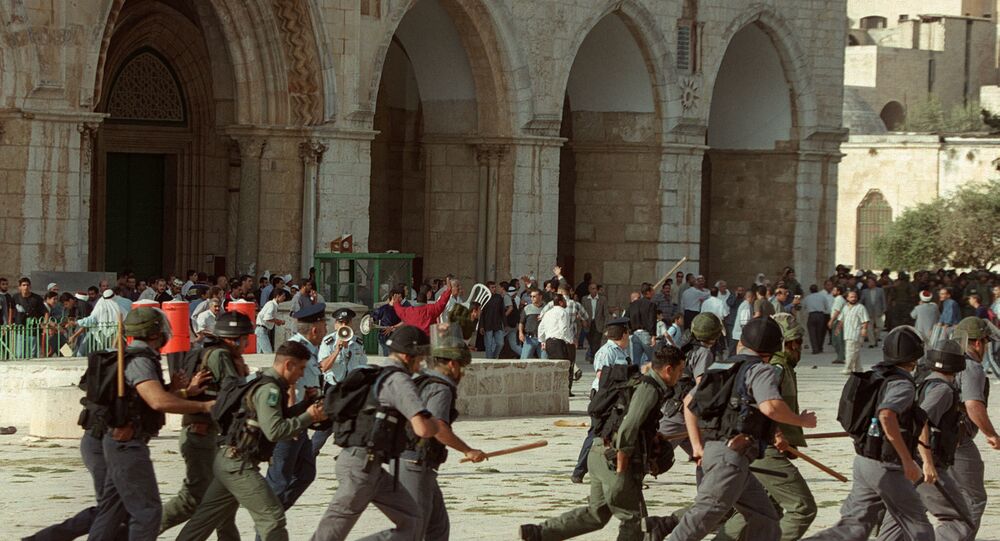 From Foe to Friend: Ex-Spy Recollects 2nd Intifada, the Recruitment of Agents and a Rebel 'Prince'

He handled one of Israel's most high-profile Palestinian informants during a time when suicide bombings had become an integral aspect of the country's reality. Now, twenty years down the line, Gonen Ben Itzhak, an Israeli handler of secret agents, speaks about the mission, the dangers and the friend he obtained during that difficult period.

In the early 2000s, with the eruption of the Second Intifada, Gonen Ben Itzhak, a senior agent of the Shin Bet, an Israeli spy agency, was tasked with the mission of monitoring Ramallah, one of the West Bank's largest cities, that served as the epicentre of the Palestinian uprising.

One of the responsibilities that lay on his shoulders was to recruit and maintain a network of Palestinian collaborators, whose task was to inform the spy agency of suicide missions and other terrorist attacks planned by the various factions operational in the PA.

But Ben Itzhak's attention was focused on only one spy, deemed as the most dangerous of them all - the Green Prince, a code name given to the son of Hamas' spiritual leader in the West Bank, Hassan Yousef.

Israel's Most Precious Source of Information

Belonging to one of the Islamic group's extremist factions and considered the man who brought Hamas to the West Bank and who cemented its presence in the area, Hassan Yousef has long been on the radar of the Israeli spy agency.

For the Shin Bet, he was a man who not only knew about planned attacks on Israeli civilians but also the one who encouraged many of them, prompting Israel's security forces to arrest him and send him to prison for several years.
That's why, the recruitment of his eldest son, Musab, was considered an achievement and Ben Itzhak knew he needed to afford Shin Bet's most valuable source within Hamas the utmost importance.

Musab's contribution was hard to underestimate. Considered by many in the West Bank as his father's heir apparent, he had access to its most secretive and delicate information, which he passed on to the Israelis.

It was the intelligence he provided for almost a decade that led to the exposure of terror cells, the thwarting of attacks, and the arrest of such prominent Hamas members as Abdallah Barghouti and Ibrahim Hamid, or Fatah's Tanzim commander, Marwan Barghouti, who is still imprisoned for a number of assaults he orchestrated.

Handling Musab was a dangerous task, recalls Ben Itzhak. "There have been several examples of Shin Bet handlers who have been murdered by their sources. One such case occurred in 1993, when an operative was killed with an axe and another one took place a year later. So I knew that handling such a high-profile figure would entail certain risks, simply because you never knew what was on the other man's mind."

And yet, he says, he trusted the man, who gave away friends and even his own father, not for the sake of money but rather in the name of ideology and the belief that violence was not the solution.

"The trust I gave him - that by the way was reciprocated -- was so great that I didn't ask my bosses for a permission to meet him. I never second-guessed his dedication to the mission and never had the slightest doubts that he wanted to stop the violence."

During the Intifada that erupted shortly after the visit of Israel's then-prime minister Ariel Sharon to the Temple Mount , which is home to one of Islam's holiest sites, the Al Aqsa Mosque, Palestinian terrorists carried out dozens of attacks against Israeli military personnel and civilians.

From 2000 until 2005, at least a thousand Israelis were killed. Thousands more were severely injured; and it was that bloodshed that made the Green Prince revise his world views.

However, that was not the only reason.

"Musab was arrested several times. While in prison, he witnessed firsthand the way Hamas, the group he belonged to, was treating inmates considered Shin Bet's collaborators. He saw the difference between his father's preaching about Muslims helping each other, and the ugly reality of torture and humiliation, something that eventually pushed him into the spy agency's arms," explained Ben Itzhak.

But what it also did was to make Musab ask questions about his own religion, forcing him to ponder on whether the path Islam was taking was actually the right one.

"It was in prison that Musab started reading other scriptures, exposing himself to Judaism and Christianity as well as Eastern philosophies. And it was there that he first encountered the notion of loving one's enemy, feeling an instant connection to that teaching," said Ben Itzhak.

In 2004, he finally converted to Christianity and three years later, he flew to the United States for studies.

"During this entire time, his family knew nothing about his conversion. Nor did they know about his secret ties with Israel. That revelation only came in 2010, when Musab called his father, who was serving out a sentence in an Israeli jail, and admitted to him of his past, saying he documented his deeds in a book he was about to release [Son of Hamas - Ed.]," Ben Itzhak recollected.

Hassan Yousef disowned his son two days after that phone call, his family cut all ties with "the traitor", whereas the US authorities, who suddenly realised Musab didn't provide them with accurate information of his origin and dubious past, decided to deport him to Jordan, from which he would be sent back home, to the West Bank, a place where he was no longer wanted or even safe.

Realising the danger Musab was in, Ben Itzhak flew to New York in July 2010 in a bid to testify in the Green Prince's favour, explaining to the authorities the great contribution of Israel's most important agent.

"My father was a general in the IDF and he has always taught me not to leave a solider behind. He didn't specify whether that soldier had to be Jewish or not, but Musab was definitely one of them," Ben Itzhak reasoned, adding that his efforts had ultimately paid off, with Musab getting asylum seeker status.

Now oceans apart, and with the coronavirus still raging in the US and Israel, the two don't get to see each other often but the bond remains there, despite the distance.

"Once this mess is over, I am taking a flight to the US and I'm going to meet him," reassured Ben Itzhak. The only question that begs to be answered is when, under the current conditions, Israel's sky will be opened to international flights.