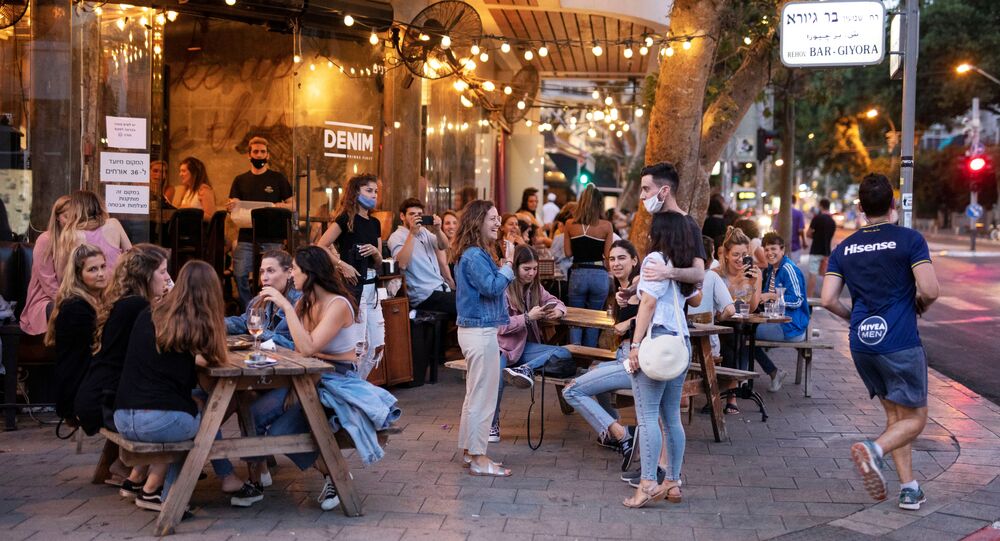 The Israeli government's decision to open up the country was way too hasty, believes an expert from the state's largest healthcare organisation, adding that mistakes could have been avoided if politicians listened to professionals instead of pursuing their own agendas.

After almost three months of restrictions imposed in response to the outbreak of the coronavirus which has already claimed the lives of more than 300 people, Israel appears to have returned to normalcy.

Schools and nurseries have opened their doors, trains that typically transport some 180,000 people daily have started running again, albeit with a significant decrease in passengers, and Israelis have even used the hot weather to crowd the country's beaches.

But for Ian Miskin, the head of Jerusalem's COVID-19 response team, operated by Israel's largest health service Clalit, the decision to open up the country was way too rushed.

"This disease has never disappeared. It has been on a low level but it has always been there".

The month of June has seen a spike in the amount of people infected with the virus. On Tuesday alone Israel registered 459 cases, the highest number since 22 April.

Some areas have been infected so badly that the government decided to cordon off entire streets and neighbourhoods and impose a number of restrictions on their residents.

Such was the case in the central city of Bat Yam, located south of Tel Aviv, where more than 300 cases have been reported in the last couple of days; and such was also the case with Tiberias up north which for the next week will be considered a zone with limited accessibility.

Miskin says the reasons behind the spike are obvious: to start off, it was the lack of discipline on the part of the Israeli public.

Israeli media outlets have reported dozens of incidents showing football celebrations or celebrity parties that took place in spite of the strict regulations introduced by the government, while reports of people not wearing face masks on public transport have also become frequent.

"Look at the amount of people wearing masks on buses and trains. It's about 5 percent, and many are not even wearing them properly [i.e. covering nose and mouth - ed.]".

© REUTERS / AMIR COHEN
Pedestrians, some wearing masks, prepare to cross the street as some businesses reopened at the end of last month under a host of new rules, following weeks of shutdown amid the coronavirus disease (COVID-19) crisis, in Tel Aviv, Israel June 4, 2020. Picture taken June 4, 2020.

'Government Doesn't Know What It's Doing'

Another factor contributing to the recent spike in numbers, according to the head of Jerusalem's COVID-19 response team, was a series of "wrong decisions" made by the government.

"Why did we need to open wedding halls? You want to get married? Go ahead but throw a party next year, when the mess is over. Also, why didn't the government open the train stations earlier, preventing the scenario that we have seen in recent weeks when people crowded bus stations during rush hours? Or why did we open schools that are now considered the hub for the spread of the virus?", Miskin wonders.

The reason for this, believes the expert, is the government's basic lack of understanding of what needed to be done.

"The government is reliant on the opinions of politicians, who pursue their own agenda, rather than listening to experts, and this is the root of the mistake".

Another problem is that they are also guided by populism, Miskin elucidates.

Soon after major restrictions were lifted, thousands took to the streets across the country, demanding the government get the economy rolling and offer them better solutions to help them to stay afloat.

Eventually mass demonstrations did the trick, prompting the government to reopen the economy "without checks and balances", leading to major mistakes.

"During the first wave, they put much emphasis on medical interests and now they are pushing for economic ones. This is wrong; these elements should be considered together. They should be able to open up the economy with low risks for the health of the country's population".

To achieve this goal, the expert suggests cancelling concerts which presuppose crowds or offer them on live TV, keeping elementary students in schools, while letting the older children study from home, introducing spacing regulations on public transportation and sports events instead of cancelling them, and shuttering wedding halls and other institutions that may pose a threat to the public's health.

"These ideas have been out there for a while. The problem is that nobody is listening. The government doesn't want to admit their mistakes and backtrack from the current policy", Miskin says.

Meanwhile, leading Israeli hospitals are bracing themselves for the worst and have already reopened departments dedicated to the treatment of coronavirus patients that were shut in April.

Israel has also purchased the necessary equipment, preparing itself for a second wave of the pandemic. In recent months the nation's spy agency, Mossad, has supplied the country with millions of items of protective gear and thousands of medical devices, including from states that don't have diplomatic relations with Tel Aviv.

And while Miskin doesn't want to go into detail while analysng Israel's preparedness, he says the situation is "simple" and what people in Israel need to be doing is just "taking responsibility for their actions", after all "this is an emergency and we should be treating it as such until we have the vaccine".

The views and opinions expressed in the article are solely those of the speaker and do not necessarily reflect the official position of Clalit Health Services, the largest healthcare organisation in Israel.