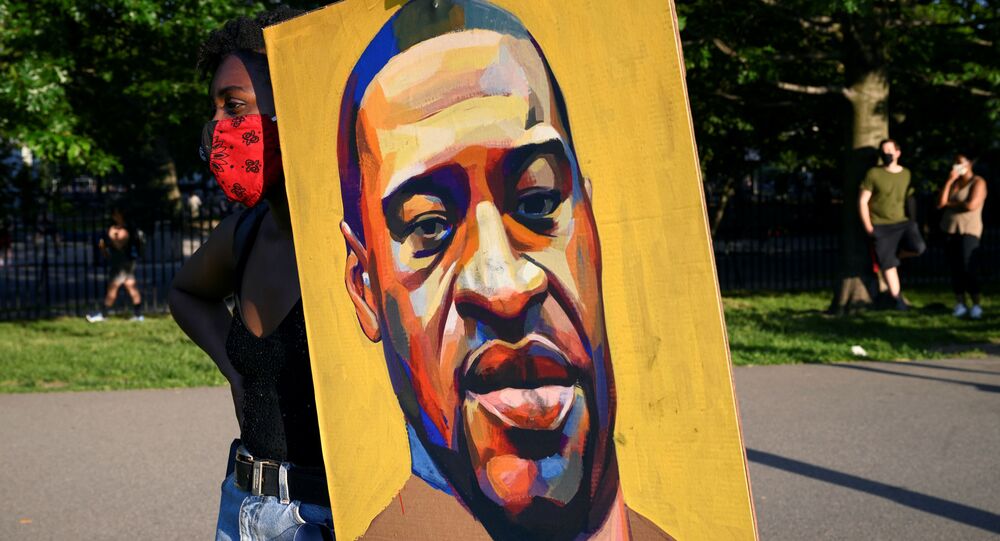 The killing of African-American George Floyd by white police officers in the US in late May sparked an ongoing massive wave of demonstrations across the United States and in many major cities around the world, protesting racism and police brutality.

The Iranian capital of Tehran hosted an international cartoon exhibition titled ‘I Can’t Breathe’ in reference to words pronounced by African-American George Floyd as he gasped for air while his neck was crushed under the knee of a white police officer.

Organized by the Aali Gallery of the Art Bureau and opened on 10 June, the exhibition features 72 artworks by 45 artists from 27 countries.

Cartoonist Masud Shojaei-Tabatabai, the director of the exhibition, said on Saturday that the content of the display was in direct reaction to the killing of George Floyd and to protests triggered by the tragic incidence of police brutality.

“After we witnessed the bitter incident in which a black man was murdered by the American police, we also witnessed a wave of protests in America, and it has spread to other Western countries. Since the pleading and the cries for help were accompanied by the words ‘I can’t breathe’, we named the exhibition ‘I Can’t Breathe’,” Tabatabai said.

Included in the works displayed in the exhibition are a cartoon of US President Donald Trump being compared to Adolf Hitler, the Statue of Liberty taking a knee while holding a sign with the text ‘I can’t breathe’ and a swastika crushing George Floyd’s neck.

Some of the artwork on display at the 'I Can't Breathe' exhibition opened today in Tehran pic.twitter.com/gJvPmucJWJ

A wave of protest against police brutality and racism has been sweeping the US since 25 May after the killing of an African-American man named George Floyd by white police officers in Minnesota's city of Minneapolis was posted to the internet. One of the officers in the video kneels on Floyd's neck for eight minutes and forty-six seconds as the dying victim was pinned to the ground, gasping for life.