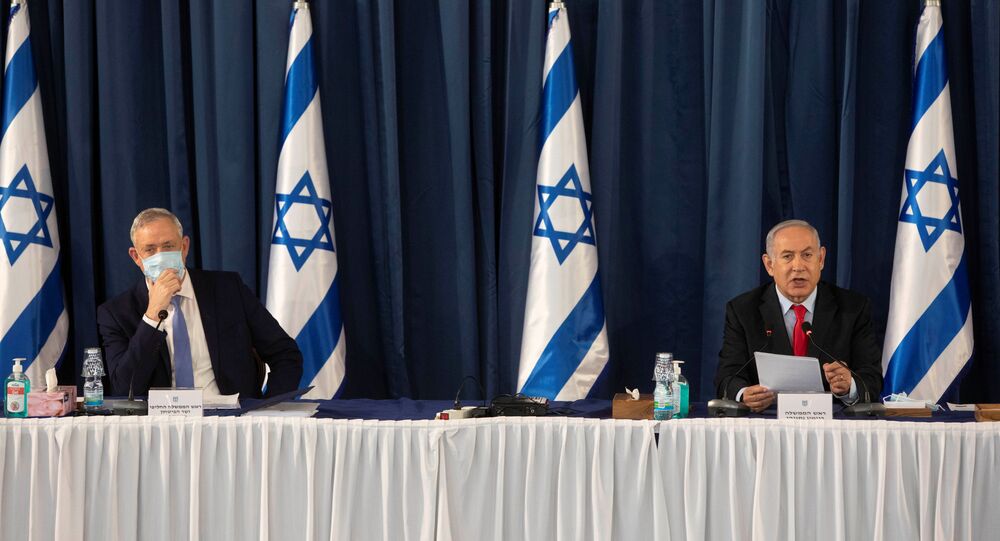 An Israeli unity government was formed in May between two rivals, the Likud party's Benjamin Netanyahu and the Blue and White party's Benny Gantz, after months of political struggles and three elections.

Israeli Prime Minister Benjamin Netanyahu is looking for a reason to put his political partnership with Benny Gantz on hold and dissolve the unity government, calling for another election, The Times of Israel reported.

“The marriage between us and Blue and White will end at the Rabbinate [with a divorce] much faster than everyone thinks. Netanyahu is trying to find the right timing and pretext to call elections”, a senior Likud source was quoted as saying by Channel 12 on Sunday.

According to the source, this pretext could be provided after talks over the state budget that are set to be completed by the end of August, as Netanyahu's son and wife are said to be urging him to disband the unity government. These allegations, however, were reportedly denied by Likud and characterized as an "ugly lie".

The Israeli PM has also reportedly demanded the change of a key clause of the power-sharing deal with the Blue and White that envisaged Gantz automatically becoming transitional PM instead of Netanyahu if elections are called between November 2020 and November 2021.

Reports on tensions bubbling in the coalition claimed that Likud was delaying the vote on a so-called Norwegian law so that Netanyahu can gain leverage to make changes to the unity deal. A law that allows Knesset members to give up their positions in favour of another member of their party was passed in the Knesset on Monday with a majority of 66 votes, according to The Times of Israel.

The reports come amid the nation's parliament being divided on the intention of an extension of Israel's sovereignty over West Bank territories - plans that have also caused disagreements between Netanyahu and Gantz, as the PM is determined to push the corresponding bill forward and Gantz remains publicly unsure that he can support it. Netanyahu has vowed to extend Israel's sovereignty over 30 percent of West Bank territories allocated to Israel under a proposed Trump "peace plan", as the Blue and White insisted on a "permanent agreement and not a partial one – and not with confrontation". Amid the apparent inability to reach a stable agreement on the bill, reports have alleged that Netanyahu offered a possibility that the sovereignty extension plans could be implemented in stages.

A vote for the hotly-contested bill is set for 1 July, with both the Knesset and the Israeli public divided on the issue, while the initiative has received criticism from Palestinians and raised concerns in several European countries.

The unity government of Israel was sworn in earlier in May after months of political turmoil and several elections, putting on pause a long-simmering confrontation between political rivals Netanyahu and Gantz and envisaging a power-sharing deal that allows Gantz to become the prime minister in 18 months.