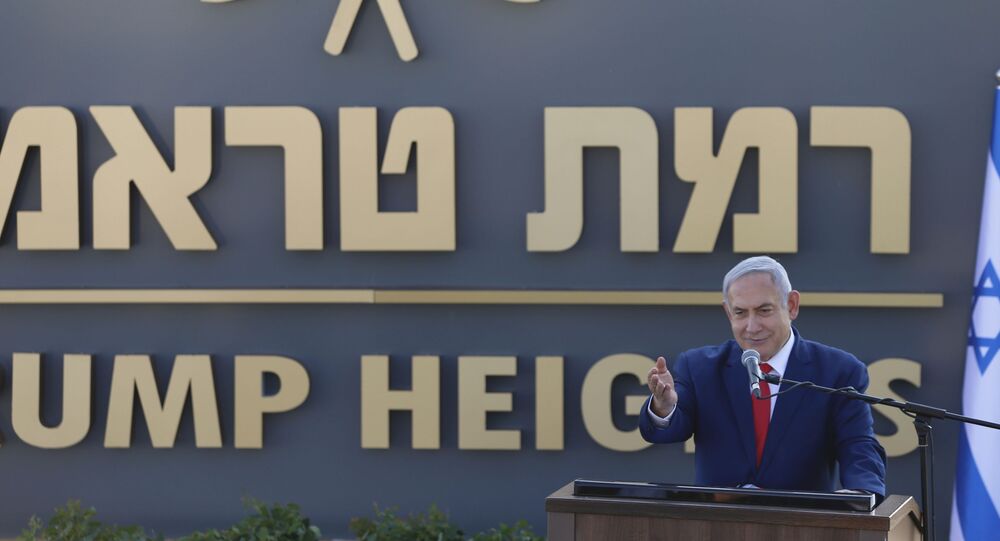 Israel occupied a portion of Syria's Golan Heights during the Arab-Israeli war of 1967, annexing the territory in 1981. The UN condemned that decision as "null and void and without international legal effect". In 2019, the Trump administration formally recognised Israeli sovereignty over the territory.

Israeli Prime Minister Benjamin Netanyahu has announced the taking of "practical steps" to create the so-called 'Trump Heights' settlement in the Golan Heights, in honour of the administration's recognition of Tel Aviv's sovereignty over the occupied Syrian territory,the PM announced on his official Hebrew-language Twitter account on Sunday.

"Today we will begin practical steps to establish the Ramat Trump [Trump Heights] settlement in the Golan Heights, as Israel's sovereignty over it was recognised by President Trump," Netanyahu was quoted as saying.

The controversial Trump Heights settlement was announced a year ago in the western Golan, with Tel Aviv making the symbolic gesture following Washington's decision to recognise the Syrian territory as Israeli.

The government is expected to budget some 8 million shekels (equivalent to about $2.3 million) for the project, with 3 million shekels of that to be allocated by the Housing and Construction Ministry, and rest to the World Zionist Organisation.

Elsewhere in his remarks, Netanyahu also thanked the Trump administration for its decision this week to approve sanctions against the International Criminal Court for its investigation of possible US and Israeli war crimes in Afghanistan and Palestinian territories. "The court in the Hague is a biased, political body that bullies Israel, the US and other democracies that respect human rights, while ignoring human rights violators, foremost of which is the terrorist regime in Iran," he said.

Israel occupied about 1,200 square kilometres of Syria's Golan Heights in 1967, after launching a preemptive air strike on Egyptian airfields and kicking off the Six-Day War against a coalition of Arab nations including Egypt, Syria, and Jordan. In 1981, Tel Aviv formally annexed the territory, but the decision was not recognised by the United Nations Security Council, including the US, Israel's ally. In December 1981, the UN Security Council unanimously adopted a resolution declaring that Israel's move to annex the Golan Heights was "null and void". Behind the scenes, the Reagan administration did not pressure Israel to rescind its decision, and in January 1982, Washington and its allies vetoed a second UN resolution calling on the international community to take action to pressure Israel over the move.

President Trump signed a proclamation recognising Israel's sovereignty over the Golan Heights in March 2019. Dozens of countries including the US's European allies rejected the measure, while Russian Foreign Minister Sergei Lavrov characterised the decision as a "conscious, deliberate demonstration of lawlessness."

The Syrian government has stressed repeatedly that it would never give up its sovereignty over the Golan Heights, and has warned that it has the legal authority to regain the territory using any means necessary.