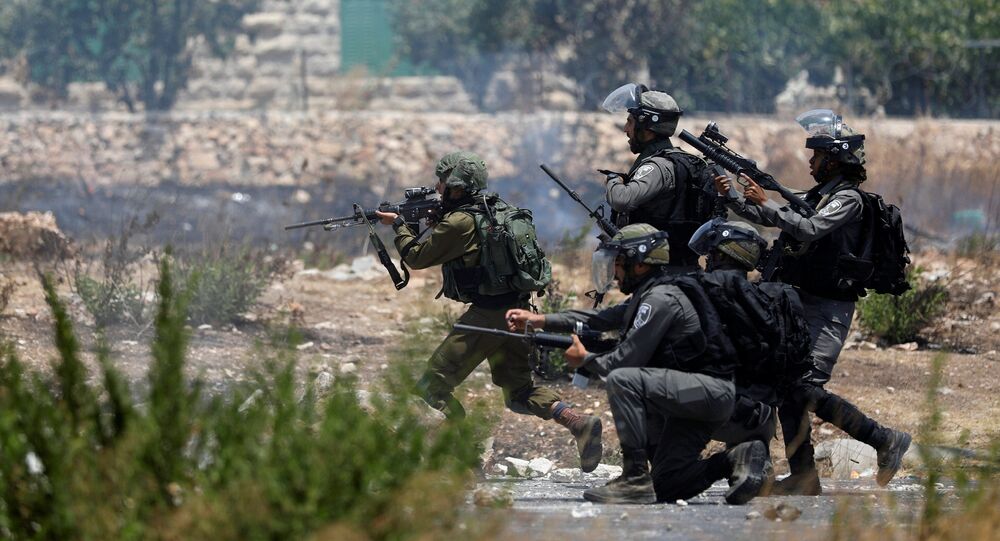 German Foreign Minister Heiko Maas, who visited Israel on Wednesday, warned the Jewish state of sanctions and dire repercussions if it chose to go ahead with extending its sovereignty over parts of the West Bank which the EU as well as most of the international community deem as Palestinian territories.

On 1 July, Israel plans to vote on a bill that would extend sovereignty over some 30 percent of the West Bank, an initiative that has already angered the Palestinians, stirred an uproar among Europeans, and most of the Arab and Muslim world.

It has also led to frictions within the Jewish state, splitting the Israeli public. A recent poll conducted by the Israel Democracy Institute showed that 50 percent of respondents supported the idea of applying sovereignty over parts of the West Bank. Some 31 percent expressed disagreement with the move, while 19 percent said they haven't made up their mind yet.

Similarly, Israel's parliament, the Knesset, has also been split over its attitude to the upcoming plan.

Cracks in the Coalition?

Netanyahu's Likud, known for its hawkish views, is the main force behind the extension of Israeli sovereignty. Although it now appears the party is united, there have been voices within Likud that expressed dissastifaction with the "deal of the century" peace plan, rolled out by US President Donald Trump at the end of January.

One of the most vocal voices is the mayor of the Jordan Valley Regional Council David El Hayani.

Although in an earlier interview with the agency, he backed the decision to extend Israeli sovereignty over some areas of the West Bank, he also warned that dancing to the tune of the American government would pave the way for the creation of an independent Palestinian state, something that will put the Jewish state's security at risk.

He is not alone. In 2018, for example, a poll revealed that only 31 percent of Likud supporters favoured the option of annexation, the majority – slightly more than 50 percent – said they preferred to find a political solution to the Israeli-Palestinian conflict.

Similar findings were registered in a 2019 survey as well, with only 36 percent of respondents saying they backed the decision to annex parts of the West Bank.

Another party pushing ahead with the move is Benny Gantz's Blue and White.

The party initially rejected the initiative, stating that the extension of Israeli sovereignty could only be applied after the international community gave the green light to the move. The Blue and White alliance also feared any dire political and economic repercussions such a move would entail.

However, in coalition talks with Likud, the two parties managed to put their differences aside signing an agreement according to which the Blue and White would back Netanyahu's move voting in favour of the application of Israeli law on certain territories in the West Bank.

Gantz has also played a pivotal role in narrowing the chasm created between the chiefs of the settlers, calling on them to "embrace what you are being given now" and "tackle the rest later".

Yet, for a bill to turn into law in Israel, the two parties will need the agreement of more than 61 parliamentarians. Together, they only have 51 MKs (unless there are surprises), who appear to back the move.

This is why it's likely that Netanyahu and Gantz will rely on their coalition partners to push through the bill. The only problem is that their partners are divided too.

Although Shas, which received nine seats in the elections in March, has declared its loyalty to the PM saying it would support Netanyahu's plan to extend Israel's sovereignty, other Ultra-Orthodox parties were less decisive.

Yahadut Hatorah, with its seven seats, objected to the extension of Israeli sovereignty and demanded that the plan be implemented with the full consent of the American government.

Given that Washington seems to be dragging its feet, hinting that it might not want to gallop towards the annexation in early July, chances are high that at least some members of the Netanyahu-led bloc will not throw their support behind the prime minister.

The same holds true for the partners that Gantz brought along, like the Labour Party under Amir Peretz which received three seats in the current parliament.

© REUTERS / ADINA VALMAN
Israeli Prime Minister Benjamin Netanyahu speaks during a swearing in ceremony of his new unity government with election rival Benny Gantz, at the Knesset, Israel's parliament, in Jerusalem May 17, 2020

Peretz has already warned that his party would not greenlight any unilateral moves, especially if they were not coordinated with the American government or if they were to harm Israel's peace agreement with Jordan.

But objections are also seen in the ranks of the opposition, albeit for a different reason.

The hawkish Yamina headed by former Defence Minister Naftali Bennett has always stressed its desire to extend Israeli sovereignty over the so-called C areas in the West Bank and that are home to half a million Jews and some 100,000 Palestinians.

In recent days, however, they too joined the chorus of skepticism, saying that the current map, promoted by the Trump administration, was problematic as it created a territorial continuity for Palestinian territories, leaving Jewish settlements located in isolated areas and thus exposed to potential attacks.

In an interview with Channel 12, Bennett said he was doubtful Netanyahu would go ahead with the vote because he was "all talk and no action" and asserted his party with its six seats would not extend its hand to help the creation of a Palestinian state.

Similar views have been expressed by the chief of Yisrael Beitenu, Avigdor Lieberman, who despite his support for annexation, said that the peace plan promoted by Trump and embraced by Netanyahu was not applicable, simply because it presupposed the establishment of a Palestinian state, to which he objected.

Perhaps the strongest opponent to the planned move is the Joint Arab List with its 15 seats. A supporter of the two-state solution and an advocate for the rights of Palestinians, the List has vowed to fight Netanyahu's intention to chop off a chunk of the West Bank by using international pressure.

Nitzan Horowitz, the head of the left-wing party Meretz with its three seats, echoed the Joint List's concerns with the planned annexation, calling the move a criminal act.

"Annexation is a war crime.  A crime against peace, a crime against democracy, a crime that will cost us blood.." he said at a rally staged on Saturday, where thousands of left-wing activists vented their anger at the government's decision to go ahead with the plan to bite off portions of the West Bank.

The so-called annexation bill promoted by Netanyahu is part of a broader plan supported by Washington that aims at resolving the Israeli-Palestinian conflict. It stipulates swaps of territories and the creation of a Palestinian state under the condition of disarmament of several military groups operating in the West Bank and Gaza. So far, the Palestinian leadership has rejected the initiative, cutting cooperation with both Israel and the US.