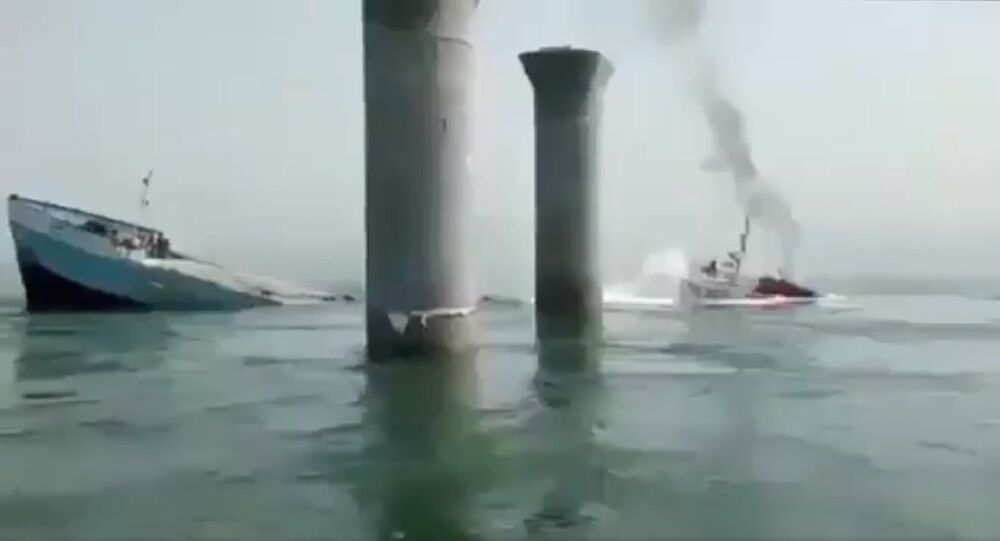 The incident comes amid ongoing tensions between Washington and Tehran in the Persian Gulf region, which began last year with mysterious sabotage attacks against several oil tankers off the Emirati coast.

One crew member of the ship is said to have died in the incident, with two others missing, and four people rescued, the official said, as cited by Iran’s Islamic Republic News Agency. The two missing persons include one Iranian and one Indian national.

According to Pasandeh, the 48-meter-long ship, loaded up with construction materials and ceramics, was headed for the Iraqi port city of Umm Qasr from the southwestern Iranian port of Khorramshahr. The ship, which had a displacement of 850 tonnes, is said to have sunk while traveling through the Khor Abdullah canal between Iraq and Kuwait.

The Iranian cargo ship #Behbahan sank off the Iraqi coast last night, media say.
The 48-metres-long ship was sailing from Khorramshahr to Kuwait through the Khor Abdullah canal. A search operation is currently underway for the rest of the crew missing. https://t.co/ubpI65ALTt pic.twitter.com/EGdVgNp72q

According to IRNA, Tehran is consulting with Iraqi authorities to dispatch a team of experts to investigate the incident, with Iraqi coast guard forces continuing a search and rescue operation for the two missing sailors.

An informed source speaking to the Iraqi National News Agency said the Behbahan began to go down in the middle of the night while awaiting instructions to ender Umm Qasr.

Iranian and Iraqi authorities have not commented on whether or not they believe foul play was involved.

Video footage released by official Iranian news sources shows the ship taking on water and going under as coast guard forces look on.

The Persian Gulf region is home to tensions between Iran and the US, with relations between the two nations taking a nosedive in May 2019, after several oil tankers were sabotaged off the coast of the UAE, just days after Washington announced that it would be sending a carrier strike group to the region. In the months that followed, tensions flared over a string of sabotage attacks, tanker seizures, and drone shootdowns, culminating in the January 2020 killing of senior Iranian General Qasem Soleimani in Baghdad, followed by Iranian missile strikes on US bases in Iraq.

Tensions in the Gulf began escalating again in April, when the US Navy complained about Iranian gunboats engaging in “dangerous and harassing” behaviour against its warships operating in the region. Last month, the US carried out live-fire drills in the area after warning that any armed vessels approaching to within 100 meters of US ship would be interpreted as “a threat and subject to lawful and decisive measures.” Last week, Iran’s Revolutionary Guards took delivery of over 100 new naval vessels, and warned Iran’s adversaries not to test the nation’s defensive capabilities.