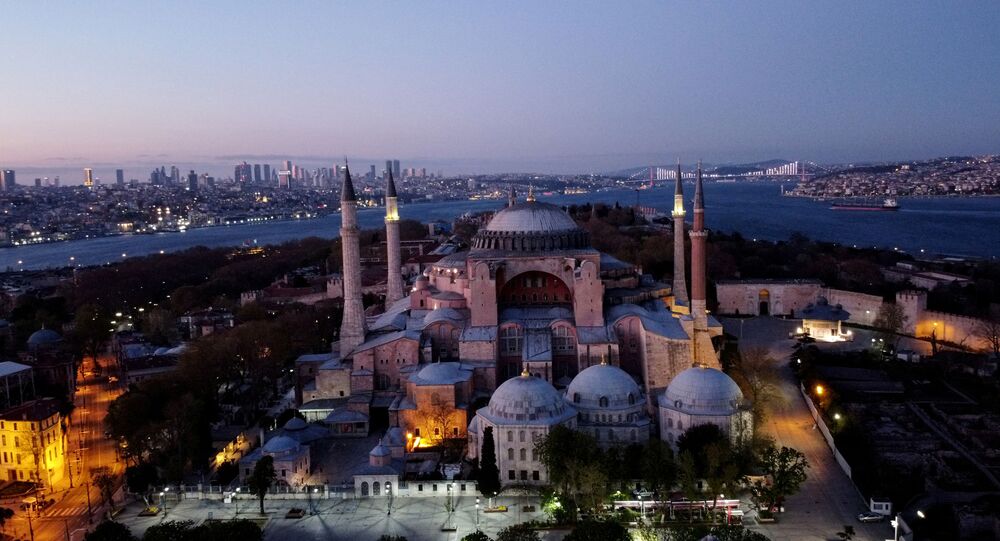 ANKARA (Sputnik) – Turkish President Recep Tayyip Erdogan announced that the prayer to commemorate the 567th anniversary of the fall of Constantinople (currently, Istanbul) would be held in Hagia Sophia on Friday.

Last year, Erdogan suggested that Hagia Sophia (formerly, the Church of the Holy Wisdom), which used to be an Orthodox Christian cathedral before becoming a mosque and then a museum, could become a mosque again with free admission.

"Tomorrow, I will take part in [festive] events in Istanbul to commemorate the anniversary of its conquest. Firstly, we will open a hospital in the Sancaktepe district. In the evening, the Al-Fatiha surah of the Quran will be read and prayers will be held in Hagia Sophia",  Erdogan said in a televised address on late Thursday.

The Church of the Holy Wisdom was completed in 537 AD during the reign Byzantine Emperor Justinian the Great and remained the main cathedral of the Orthodox Church until the conquest of Constantinople by the crusaders in 1204, after which the building was turned into a Catholic cathedral. In 1261, the Byzantine Empire recaptured the city and the Church of the Holy Wisdom once again became the main Orthodox cathedral.

The Ottoman troops led by Sultan Mehmet II captured Constantinople on 29 May 1453, and after that, the cathedral became a mosque. In 1934, then Turkish leader Mustafa Kemal Ataturk issued a decree, which turned Hagia Sophia into a museum.