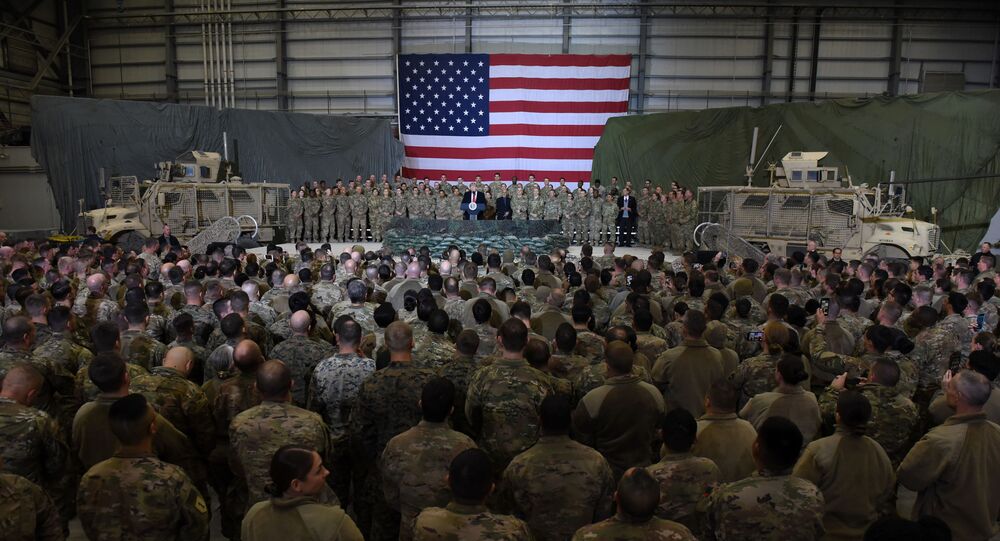 US President Donald Trump on Tuesday said that he has no target for when US troops in Afghanistan should return home and that troop withdrawal should occur "as soon as is reasonable."

The US president noted that while he desires a full military withdrawal from Afghanistan, he has not yet set a target date.

"We’re not acting as soldiers, we’re acting as police, and we’re not sent over there to be policemen. But we’re there 19 years, and I think that’s enough. We want to bring our soldiers back home … we can always go back if we have to. If we have to go back, we’ll go back raging, and they [the soldiers] will go back as warriors, fighters, but right now we’re policing, and we’re not meant to be police force," Trump told a White House news conference.

When asked if the US Thanksgiving holiday on November 26 was a target date, Trump responded: "No, I have no target. [US troops will return] as soon as is reasonable. Over a period of time, but as soon as reasonable. We’re down to 7,000-some-odd soldiers right now, and in Iraq, we’re down to 4,000 soldiers. So we’re making a lot of progress."

Senior US military officials are expected to discuss options for withdrawing American troops from Afghanistan with Trump over the next few days. Complete withdrawal of troops could occur as early as before the November presidential election, officials familiar with the matter told the New York Times this week.

According to those officials, Trump has expressed a desire to withdraw troops from Afghanistan earlier than the timeline noted in the February 29, 2020, peace agreement with the Taliban, which stated that US troops would be completely removed within 12 to 14 months if the group met conditions stipulated in the agreement. One of the stipulations is that the Taliban must publicly renounce both Daesh and al-Qaeda before US troops begin to leave the country.

However, senior military officials believe that withdrawing all troops from Afghanistan too quickly may negatively affect the peace deal with the Taliban.

One of the options US military officials plan to present to Trump is removing all troops from the country before Election Day. Another option, however, would follow the timeline in the peace agreement and keep US forces in the country until May 2021. Some Defense Department officials have expressed concern that there are no guarantees that Afghanistan will not become a haven for attacks against the US once American troops leave.

According to the New York Times, Trump has also pushed for early withdrawal over concerns about the COVID-19 novel coronavirus, which has been spreading through Afghanistan. The Pentagon believes that at least 50% of Afghan security forces are infected with COVD-19; this has halted training and joint operations between the US and Afghan forces, although airstrikes against Daesh are still underway.

When Jonathan Hoffman, assistant to the secretary of defense for public affairs, was asked about the Times report and whether US troops will leave Afghanistan earlier than outlined by the agreement with the Taliban on Tuesday, he said that it's all "conditions based."

Lisa Maddox, a former CIA analyst, told the Times that reducing the US deployment by a few months may send the wrong message.

“It sends a message to our Afghan partners that we are running away,” she explained. “Extra time allows for better turnover, which is a complicated process given the US government’s involvement in supporting the country’s security and governance.”

3-Day Ceasefire in Afghanistan to Continue for Another Week - Reports