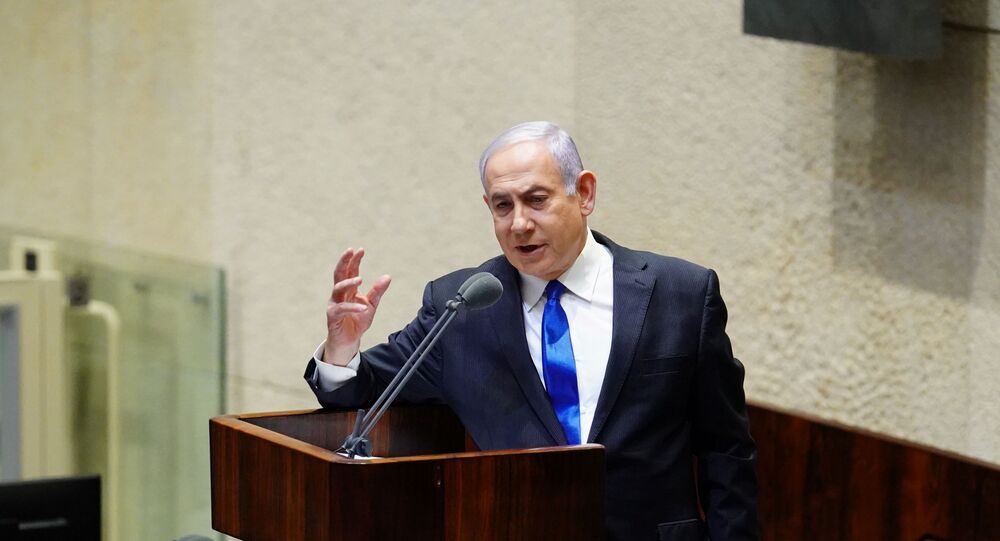 Netanyahu Slams Corruption Trial Against Him as Attempt at 'Toppling Me, in Any Way Possible'

Netanyahu is facing charges of fraud, bribery, and breach of trust in two criminal cases against him, which he already previously denounced as an attempt to bring him down. The criminal cases have long remained in limbo but three of them finally reached court last year.

Israeli Prime Minister Benjamin Netanyahu has lambasted the charges levelled against him as an "attempt to depose a strong right-wing leader" and topple him "in any way possible", while making a statement in court. He said his opponents were hoping to use this trial as a means to remove "right-wing [political parties]" from the Israeli political landscape for "many years" to come.

Netanyahu also said that he will be "standing tall, head high" throughout the corruption trial. The prime minister went on to accuse the prosecutors of trying to "tailor" a criminal case against him using "contaminated" and exaggerated evidence.

"These investigations were tainted and stitched-up from the first moment", Netanyahu commented on the case against him.

The prime minister previously blasted the cases against him as an "attempted coup" following Attorney General Avichai Mandelblit's announcement that he would indict Netanyahu on three criminal cases known as case 1000, case 2000, and case 4000.

What Are Netanyahu's Criminal Cases All About?

Under case 1000 Netanyahu is accused of fraud and breach of trust over allegations of receiving valuable gifts, such as cigars and champagne, worth some $180,000 from billionaires between 2007 and 2016, allegedly in exchange for political favours. Case 2000 suggests the prime minister struck a deal with the editor of one of the country's biggest newspapers, Yedioth Ahronoth, to tone down its criticism of Netanyahu in 2014, promising to boost the newspaper's positions in the country in exchange.

Case 4000, in turn, accuses the prime minister of bribery, fraud, and breach of trust for using his post as communications minister between 2012 and 2017 to strike a quid-pro-quo deal with a controlling shareholder of Bezeq - the country's telecom giant. The prosecutors believe that shareholder Shaul Elovitch provided improved coverage for the prime minister in the media controlled by Bezeq in exchange for favours from Netanyahu.

Lots of Noise, Three Cases, and One Prime Minister: Benjamin Netanyahu Trial Kicks Off in Jerusalem