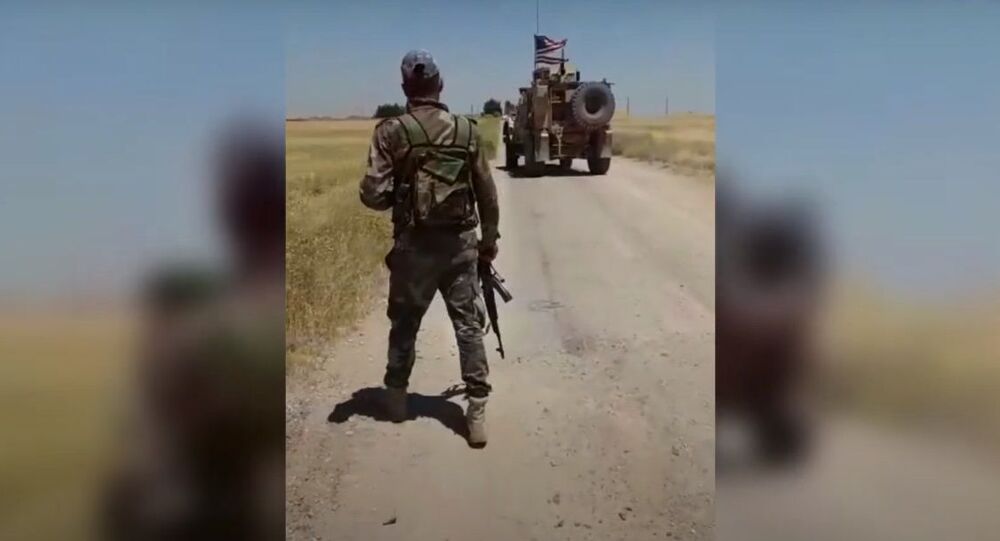 Watch Troops Force Another US Convoy to Turn Around, Go Back Where It Came From in Northeast Syria

The incident is but the latest in a series of tense but mostly non-violent confrontations between Syrian civilians and troops and US occupation forces in oil-rich northeastern Syria.

Syrian Army troops manning a security checkpoint outside the town of Tell Tamer in western al-Hasakah province intercepted a convoy of US armoured vehicles on Wednesday and forced it to turn around and head back the way it came from, SANA has reported.

A short video clip of the incident shows an US Army Oshkosh M-ATV MRAP vehicle with an American Flag mounted on its rear turning around and driving away, while several Syrian servicemen armed with assault rifles slowly walk behind it. Other US vehicles are seen in the distance.

According to SANA, the US convoy had intended to make its way from Tell Tamer toward the village of Um al-Khair. The reason for the deployment is unclear. The Pentagon has not commented on the incident.

The confrontation is just the latest in months’ long standoff in northeast Syria between local civilians and Syrian army units on one side and US forces and their Syrian Democratic Forces militia allies on the other, with similar incidents reported regularly in recent weeks, with locals and troops blocking roads with vehicles, artificial barriers or even their own bodies as US convoys attempt to drive by. US forces ramped up their presence in Al-Hasakah province, rich in oil and gas, last October, after President Trump openly admitted US plans to “keep” Syria’s oil, ostensibly to guard it against both Daesh (ISIS)* terrorists and the Damascus government.

Most of these incidents have remained peaceful for the moment, but firefights do break out from time to time, with Syrian forces facing a clear disadvantage to the heavily-armed US troops. In early May, a Syrian civilian was killed by US servicemen after his vehicle drove off the road near the Conoco oil field in Der ez-Zor province. In April, unidentified forces attacked and destroyed a US Hummer carrying both US troops and SDF militia in al-Hasakah, injuring several people.