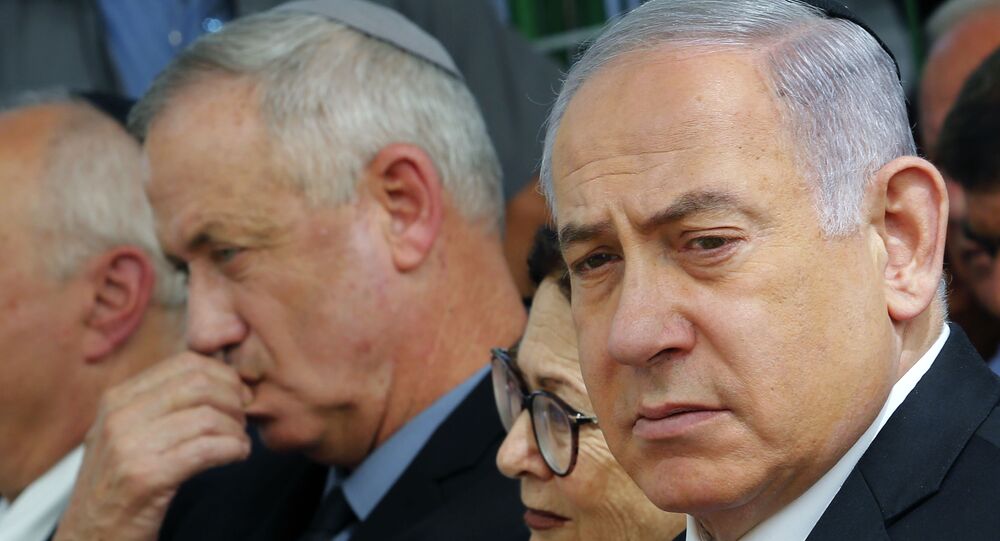 The new Israeli government will be sworn in later today after a series of speeches that will start at 1600 GMT and will include the introduction of the coalition's fundamental principles and goals.

The government's handling of the Coronavirus, that has already claimed the lives of more than 260 Israelis, is topping the agenda. The coalition that was established under the banner of fighting the pandemic will try to answer to such burning issues as high unemployment rates, compensation to businesses that were forced to close down following the outbreak of the virus as well as the big education gaps created as a result of the situation.

The new government is also expected to tackle a number of security and diplomatic issues, especially Israel's growing threats in the south and the north (from Hamas and Hezbollah, respectively) plus the plan to extend the Jewish state's sovereignty over parts of the West Bank which are considered Palestinian land under international law, a vote that's expected as early as July.

To address these and other acute issues that the country is facing, Benjamin Netanyahu and Blue and White chief Benny Gantz, who is set to serve as his deputy before taking on the role of the prime minister a year and a half from now, will need at least 32 ministers, Israel's highest since its establishment in 1948.

The bloated government will cost Israeli taxpayers some $30 million annually, and has already drawn criticism from Israel's mass media with protests expected later on Thursday in front of the Knesset, where the new government is going to be sworn in.

While not all the portfolios have been divided yet, key players have already been announced.

Yuli Edelstein, for example, the man who chaired Israel's parliament for years but was forced to resign following a dispute with the country's High Court of Justice, will become the Health Minister and attempt and tackle the pandemic that continues to cripple the Jewish state's economy and its daily life.

With no relevant experience in the field, Edelstein plans to surround himself with professionals to advise him on how to sail the country through the storm of the pandemic that has been raging in Israel since mid-March.

The Finance Ministry will be in the hands of Yisrael Katz, the man who is mostly associated with his overhaul of Israel's transportation but whose tenure has been marked with stalled projects and an inability to meet deadlines.

Another important post will probably be given to Amir Ohana, the young Justice Minister considered Netanyahu's puppet, who is known for his decision to shut down Israel's courts under the pretext of fighting COVID-19, a decision that postponed the beginning of the prime minister's trial to May 24.

Now Ohana is expected to take on the job of Homeland Security Minister, with responsibilities ranging from curbing the spread of drugs, violence and illegal arms, to helping in the fight against the pandemic.

The former holder of the post, Gilad Erdan, will travel to the US, where he will represent Israel in the United Nations and will also assume the job of ambassador in due time.

While Netanyahu has almost finished distributing ministerial positions, eliminating most of the obstacles in his way, Blue and White leader Benny Gantz is set to make a decision on the key roles later today.

Unlike Netanyahu, who needed to split a limited number of positions among a large number of loyalists, Gantz brings a team of 16 parliamentarians, each of whom will have a post in the new government, and has to decide on who will get the more prestigious portfolios.

Some of the positions have already been taken by a number of his loyalists. To start off, Gantz is set to take the job of Defence Minister, a role that he will hold until November 2021, when he will replace Netanyahu as PM.

Controlling an annual sum of over $20 billion which accounts for a whopping 11 percent of Israel's total budget, Gantz will need to confront enemies he failed to curb in the past -- Hamas and Hezbollah.

Gabbi Ashkenazi, another former chief of staff, will become Israel's Foreign Minister but will be replaced by a Likud member a year and a half from now. Apart from having to deal with the planned extension of sovereignty, he will also need to lift the institution's low morale, elevate its depleted resources and restore its past glory.

© REUTERS / POOL New
Netanyahu Notifies Israeli President of Formation of Government
A lot of work will also need to be done in Israel's Ministry of Justice, which has lately been a friction point between Netanyahu, who wanted to man it with one of his loyalists to allegedly evade prosecution, and Gantz, who wanted to prevent the prime minister from doing so.

After a fierce battle that paved the way for a coalition agreement, the two sides found a solution, with the former chief of staff appointing Avi Nissenkorn to the ministerial post.

Although he belongs to the Blue and White party that vowed to defend Israel's democracy from attempts to destabilise its judiciary system and pass laws that would limit the power of judges, Nissenkorn is also known for his hawkish views and is considered a conservative when it comes to such topics as law and order, which means it is unlikely he will challenge Netanyahu and keep the word his party gave to its voters in pre-election campaigns.