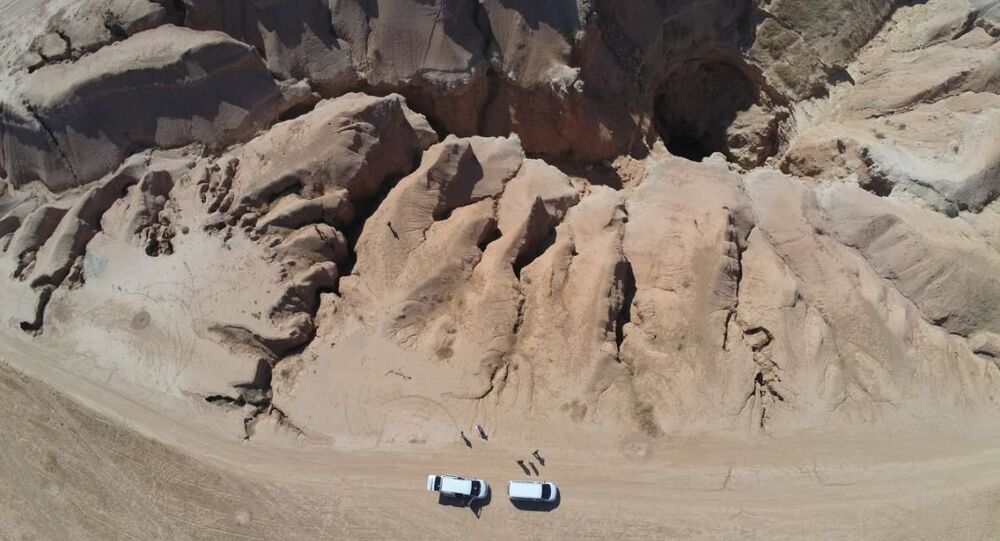 The area around the gorge is currently controlled by the Syrian National Army, an amalgamation of Arab and Turkmen rebel fighters operating mostly in the militant and terrorist-controlled province of Idlib.

The Daesh (ISIS)* terrorist group used the al-Hota gorge north of Raqqa city to dump the bodies of civilians it had abducted or detained, Human Rights Watch has reported, citing the results of a preliminary investigation featuring the use of drones fitted with cameras to look deep into the gorge.

Flying a drone into the 50-meter-deep geological landmark, investigators from the US-based NGO discovered a grizzly scene: the remains of at least six human beings floating in a pool at its bottom.

WARNING: The video below contains graphic footage. Do not watch if you are sensitive to gruesome scenes.

HRW believes that the bodies were dumped after Daesh lost its control over the area. The victims’ identities and cause of death remain unknown. The NGO fears more remains may be present below the water’s surface.

The group is calling on authorities to secure the area and to remove the remains and start a criminal investigation, arguing that the probe should be carried out by whoever controls the area.

Daesh held the gorge area between 2014 and 2015. At present, the area around it is held by Turkish-backed Syrian National Army (formerly Free Syrian Army) militants, a militant group fighting both the Assad government and the majority Kurdish Syrian Democratic Forces, a US-backed militia.

Prior to its liberation by the SDF, including independent Syria journalist Vanessa Beeley reported on the horrific campaign of dumping bodies in the landmark, which she indicated was actually begun by FSA forces who executed roughly 20 Syrian troops who refused to surrender or join them. Eventually, the area fell to Nusra Front* fighters, and then to Daesh, which used the gorge to execute both competing militants and civilians alike, with as many as 2,000 corpses said to have been dumped into the gorge.

The Syrian government, which has made its own gruesome discoveries of victims of terrorist mass executions in recent years, has repeatedly called on any remaining militants to surrender, and for foreign occupying forces to leave the country immediately.