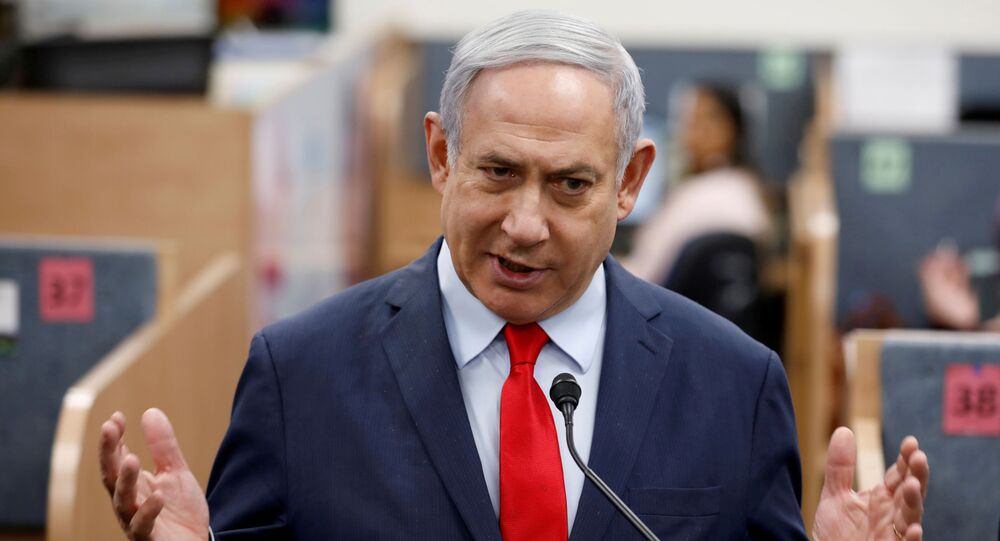 Benjamin Netanyahu was indicted earlier this year on charges of accepting bribes, fraud and breach of trust. Israel’s longest serving prime minister has denied any wrongdoing, claiming he is the victim of a politically motivated "witch hunt".

This Sunday Israel's high court started a two-day hearing into petitions against Prime Minister Benjamin Netanyahu forming a government while under indictment over corruption charges, with a ruling expected to be announced by Thursday, reported AP.

“Today we shall hear arguments on the question of bestowing the duty of forming a government on a Knesset member against whom an indictment has been filed… Tomorrow there will be a hearing on the second issue, regarding the coalition agreement," announced Chief Justice Esther Hayut as she opened proceedings, broadcast live, at the head of a panel of 11 judges.

Most of Israel is still under coronavirus movement restrictions.

Netanyahu was indicted in January on charges of bribery, fraud and breach of trust – allegations he has emphatically denied, calling all three cases against him a political witch-hunt.

If convicted in the trial due to start on 24 May, Netanyahu could face up to 10 years in prison on bribery charges, with a maximum three-year term possible for fraud and breach of trust.

Following three inconclusive elections, on 20 April 2020 Netanyahu’s former rival and leader of the Kaḥol Lavan (Blue and White) Party agreed to join a unity government with the long-serving Prime Minister, which would rotate the premiership, with Netanyahu serving as prime minister the first 18 months and Gantz serving the next 18 months.

However, a number of advocacy groups, including opposition parties, issued six petitions, with two of them demanding the court decide whether the pact signed by Likud and the Blue and White was legal, and whether Netanyahu, indicted in a spate of graft probes that include buying positive press and receiving illegal gifts from a rich donor, was in a position to form a government.

According a statement by Eliad Shraga, the head of one of the groups petitioning the court, Movement for Quality Government in Israel, it was “unconscionable that a man like this will go in the morning to court to sit in the dock and in the evening will manage the security cabinet and send us and our children to battle.''

Israeli law, however, says a prime minister under indictment is not obligated to step down until a final conviction.

Should the Supreme Court void Benjamin Netanyahu's ability to serve as prime minister, the move might trigger the country's fourth consecutive election in just over 12 months.

Demonstrators have been taking to the streets weekly to protest Netanyahu's continued rule, with counter-protesters also turning out to express their opposition to the court’s hearing the petitions.

© REUTERS / CORINNA KERN
Israelis hold up their mobile phones as they demonstrate against Israel's Prime Minister Benjamin Netanyahu, under strict restrictions made to slow down the coronavirus disease (COVID-19) spread, on Rabin Square in Tel Aviv, Israel 19 April 2020

Clock's Ticking on Netanyahu & Gantz to Form Government: If They Fail, Knesset to Disperse on 7 May