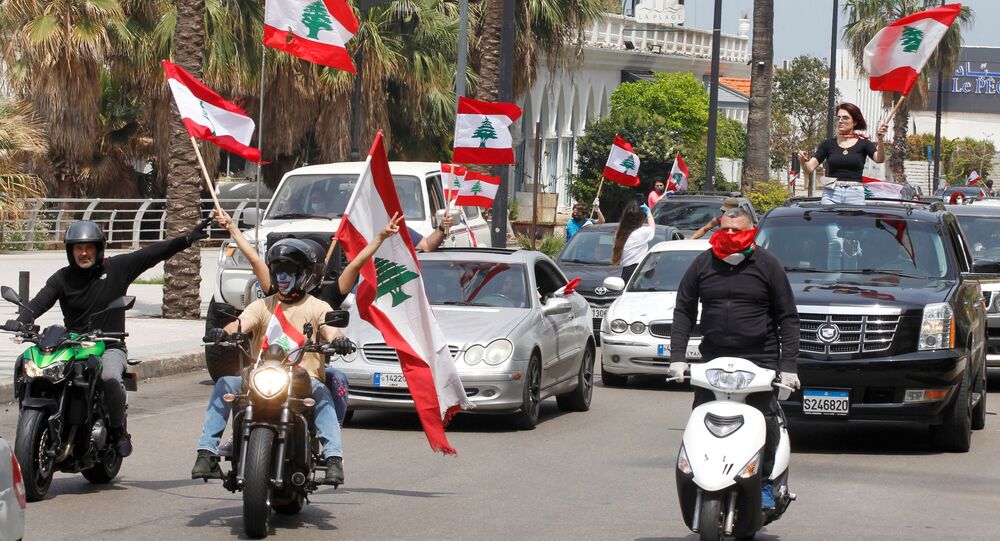 BEIRUT (Sputnik) - Demonstrators blocked roads and hurled Molotov cocktails at bank offices across Lebanon on Monday as the national currency hit another low amid the prolonged economic crisis exacerbated by the coronavirus pandemic.

Activists set fire to tires and blocked a highway in the center of Beirut and its northern suburb. Demonstrations, accompanied by road blockades, also rocked Sidon, Tripoli, Baalbek district and Akkar, according to the LBCI broadcaster.

This is officially a riot - very similar to the Beirut riot that targeted local banks in Hamra street a couple of months ago.#Lebanon#LebanonProtests #المسلسلات_أهم_من_الجوع pic.twitter.com/tFN2tOAtpj

The armed forces were dispatched to restore order. In central Beirut, one person was injured in clashes between protesters and security forces. The military command reaffirmed their respect for the right to peaceful protest and freedom of expression but reserved their right to take measures to ensure order and unhindered transport traffic.

In the city of Tripoli, clashes erupted between the army and protesters after the military began to disperse the protesters and try to unblock roads in different parts of the city, Lebanese television station LBC reported. The national army command said a group of ''provocateurs" used Molotov cocktails and hand grenades were thrown at army vehicles. As a result, two servicemen were injured.

tripoli right now since no news channel is covering this pic.twitter.com/O9tC1APMcl

According to the military command's statement, the army intervened after groups of people began to set fire to and destroy private and municipal property. Several offices of different banks were burned down.

The Lebanese Red Cross reported that six ambulance teams were working at the site of the clashes in Tripoli.

The Association of Banks in Lebanon has already officially requested the Interior Ministry to bring those responsible to account and ensure the safe operation of financial organizations.

Mass protests broke out in violation of the state of epidemiological emergency, which was declared on 16 March and is set to last until 11 May. People demand that the government alleviate the economic situation.

Lebanon has been living through an exacerbating economic crisis since October. Mass protests eventually resulted in a change of government, but no particular relief followed, as the COVID-19 outbreak added to economic woes by putting businesses on hold and people out of jobs.