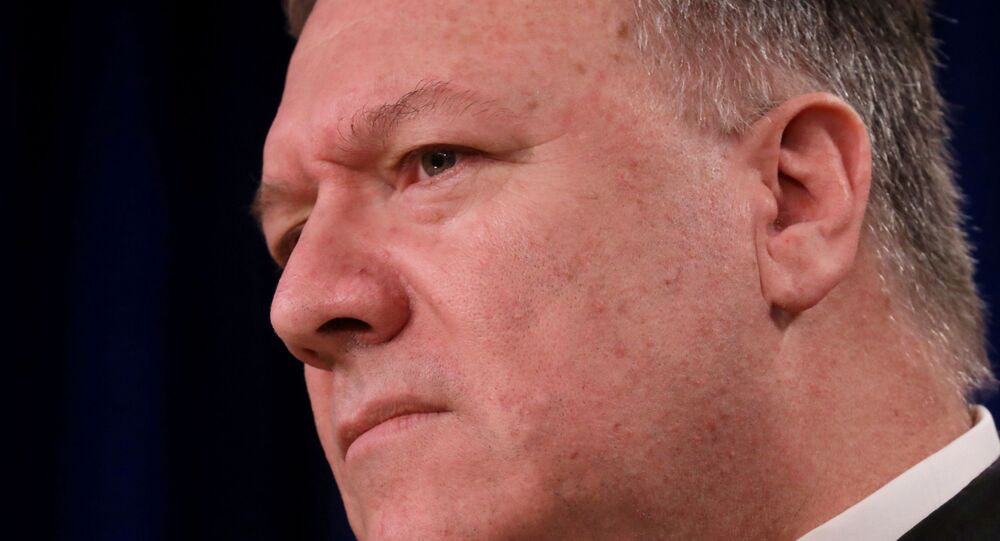 US President Donald Trump unilaterally withdrew the United States from the JCPOA nuclear agreement with Iran in 2018. After this move, US sanctions on the country were reimposed, and the Trump administration refused to lift them amid the coronavirus pandemic crisis.

Secretary of State Mike Pompeo is reportedly drafting his team to come up with legal arguments as to how the United States is still a part on nuclear agreement, although Donald Trump revoked US participation in 2018, The New York Times reported on Sunday.

According to the report, the moves could be a part of "an intricate strategy to pressure the United Nations Security Council to extend an arms embargo on Tehran" or a move that could result in even harsher sanctions for Iran.

Trump administration officials are reportedly mulling a resolution that would prohibit other countries from exporting conventional arms to Iran after the current ban expires in October. In order for this resolution to circumvent opposition from Russia and China, Pompeo's team has allegedly come up with a plan in which the White House would claim that, legally, the US is still a part of the 2015 nuclear deal with Iran.

This could mean that, in the event that the arms embargo is not renewed, the US could enforce it from the position of a signatory, allowing the White House to restore sanctions previously imposed on Tehran before the 2015 accord was signed.

"We cannot allow the Islamic Republic of Iran to purchase conventional weapons in six months. President Obama should never have agreed to end the U.N. arms embargo. We are prepared to exercise all of our diplomatic options to ensure the arms embargo stays in place at the U.N. Security Council", Pompeo declared, according to The NY Times.

Ealier in the week, Pompeo urged the UN to extend the arms embargo against Iran, criticizing Tehran over its recent space launch and calling its space programme "neither peaceful nor entirely civilian". He also suggested that "no country has ever pursued an intercontinental ballistic missiles capability except for the purpose of delivering nuclear weapons".

On April 22, Trump announced that he said that the US Navy should "shoot down and destroy any and all Iranian gunboats if they harass our ships at sea", a move that prompted the head of the Iranian Revolutionary Guard Corps (IRGC), Hossein Salami, to reciprocate with a threat of a "crushing response" that would follow hostile actions against Iranian ships.

Iran and other countries, along with some US lawmakers, have repeatedly urged the Trump administration to lift its sanctions, as they make it extremely difficult for Tehran and neighboring countries to slow the spread of the COVID-19 pandemic. The Trump administration has instead insisted that the sanctions do not prevent Iran from receiving humanitarian aid or medical supplies.

Relations between Iran and the US worsened after Trump pulled out from the 2015 Joint Cooperative Plan of Action nuclear agreement (JCPOA) in May 2018. Tensions have spiked following the targeted assassination of top Iranian general Qasem Soleimani following a January 2020 Trump order.