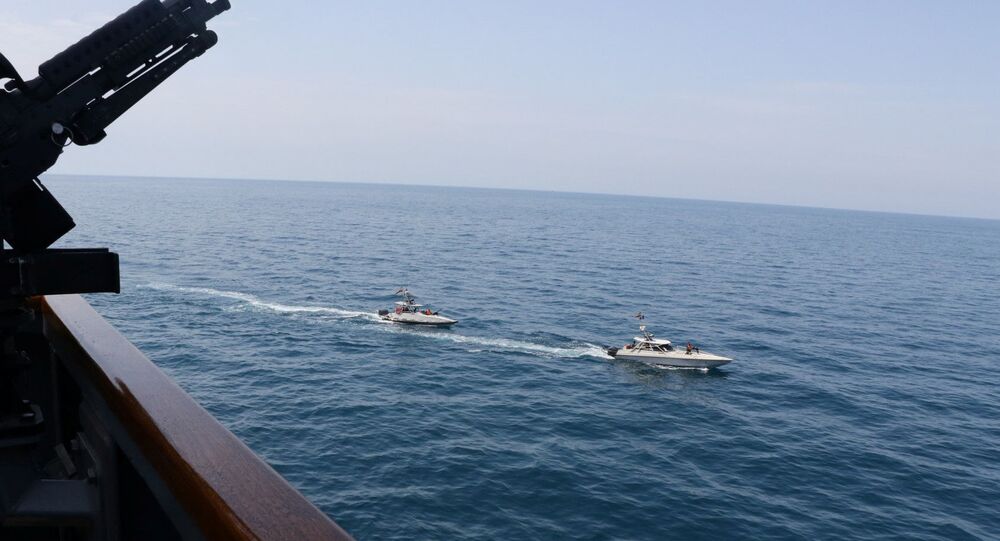 The demands come amid the US Navy's allegations that Iranian boats made “dangerous and harassing approaches” to American military vessels in the Persian Gulf, to which Iran promised to give a "decisive response", while suggesting that the US should "follow international regulations".

Iranian Foreign Ministry spokesman Abbas Mousavi said Monday during a press conference in Tehran that the presence of US forces is an "obstacle" for "normal patrol operations" in the Persian Gulf. He urged what he described as "the foreign forces" end their illegitimate presence in the region.

“As stated by the Islamic Revolution Guards Corps (IRGC), we firstly call on the foreign forces, who are present in the region illegitimately, to end their presence here. We want them to leave the region as soon as possible, whatever may be the motive for their presence here”, Mousavi said.

In responding to claims by the US Navy that 11 Iranian military vessels circled US ships in the Persian Gulf on Wednesday, the Tehran spokesman stressed that it was American forces who caused an Iranian patrol boat "to react and give them the necessary warnings".

Earlier, Iran's Defence Minister, Amir Hatami, slammed the US military presence in the Persian Gulf, saying it is the reason for insecurity in the region.

"The Iranian people are insightful and see who is right; we are at home and they have come from the other side of the world to create a problem for the countries of the region by threatening and sanctioning them," Hatami told reporters on the sidelines of a parade held on the occasion of Iran's Army Day.

Iranian demands follow a statemnt by the US Navy, in which it was claimed that IRGC vessels violated international norms as it "conducted harassing approaches" to American military ships.

"The IRGCN vessels repeatedly crossed the bows and sterns of the US vessels at extremely close range and high speeds, including multiple crossings of the Puller with a 50 yard closest point of approach (CPA) and within 10 yards of Maui's bow", the statement read. "The IRGCN's dangerous and provocative actions increased the risk of miscalculation and collision, were not in accordance with the internationally recognized Convention on the International Regulations for Preventing Collisions at Sea (COLREGS) 'rules of the road' or internationally recognized maritime customs, and were not in accordance with the obligation under international law to act with due regard for the safety of other vessels in the area".

These so-called maritime military incidents remain common between Iranian and US forces in the Persian Gulf, particularly with the narrow body of water called the Strait of Hormuz. Last year, two oil tankers, the Panama-flagged Kokuka Courageous and the Marshall Islands-flagged Front Altair, were attacked in the area. While the causes of the incidents remain unknown, the United States and its allies have blamed Iran, which has denied involvement.

Tensions between Tehran and Washington intensified after Iran's top military commander, Qasem Soleimani, was assassinated in January on the direct order of US President Donald Trump. Additionally, the US refuses to lift its sanctions against the country, making it extraordinarily difficult for Iran to access medical supplies and other resources to slow the regional spread of the COVID-19 pandemic.