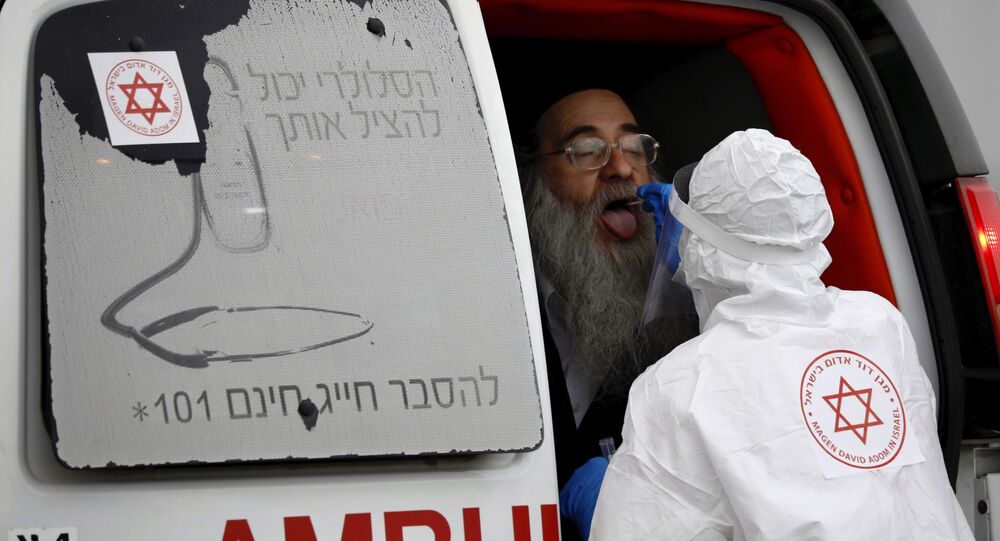 On Tuesday evening, the Israeli Health Ministry reported 9,248 confirmed coronavirus cases in the country, with the death toll climbing to 65.

The Israeli Health Ministry has announced that it has signed a $25 million deal with the Chinese company BGI for the purchase of new equipment that is expected to help the Jewish state carry out at least 10,000 COVID-19 tests a day and tackle testing kit shortages, The Times of Israel reports.

In the next few weeks, the equipment is due to be installed in six different Israeli labs to conduct testing alongside domestic facilities.

The labs will deal with polymerase chain reaction (PVR) tests, which quickly detect viral nucleic acids and human antibodies to the coronavirus.

The signing of the agreement followed Prime Minister Benjamin Netanyahu last week ordering the purchase of enough testing kits to carry out about 30,000 tests a day, with the Health Ministry earlier setting a daily limit at 10,000. The Israeli news outlet Channel 12 reported that just about 2,000 tests were conducted in the country on Tuesday.

The move came as the Health Ministry reportedly tightened its COVID-19 testing criteria, also calling for conducting more such tests in the country’s nursing homes, seen as a hotspot for the virus.

The government, in turn, pledged that the Defence Ministry and Home Front Command would join the Health Ministry’s efforts to tackle the coronavirus outbreak in the nursing homes.

In a separate development on Tuesday, the Israeli news website Ynet reported that a plane with at least one million face masks from China had landed at Ben-Gurion International Airport.

On Monday, Netanyahu declared a general three-day lockdown starting at 4 p.m. (13:00 GMT) on 7 April to prevent people from travelling to festive meals that are traditionally held on the eve of the Jewish holiday of Passover, which begins on Wednesday.

Last month, the Israeli government announced a number of emergency measures to limit the movement of citizens and trade due to the COVID-19 pandemic, also banning cultural events and closing schools and universities.

The Health Ministry’s latest estimates indicate that there are 9,248 people infected with the coronavirus in Israel, where the death toll from the outbreak currently stands at 65. A total of 770 people across the country have fully recovered.