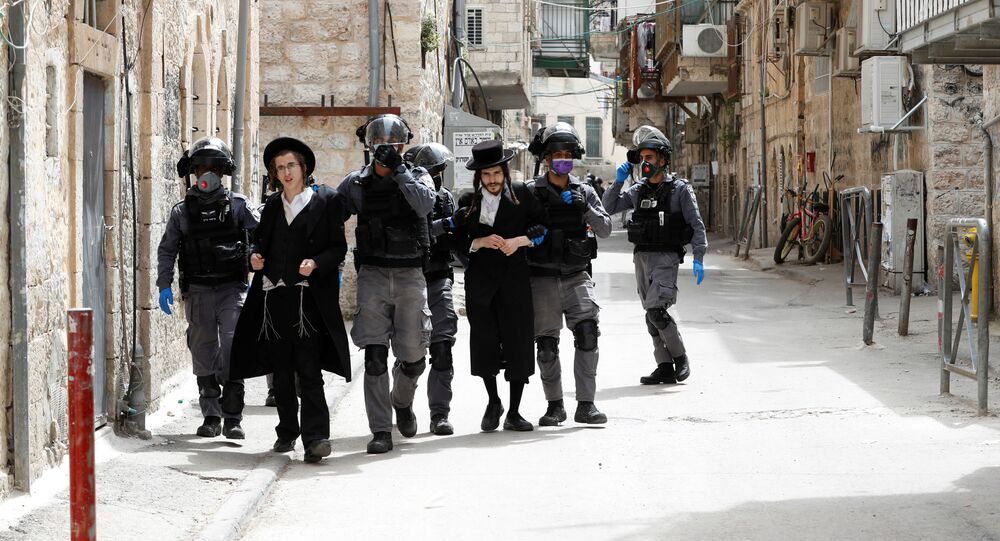 On Sunday, the Israeli Health Ministry reported that the death toll from the COVID-19 outbreak in the country has climbed to 51.

Israeli police and special forces are doing their best to enforce the coronavirus-related quarantine measures in the country, which, in particular stipulate limiting citizens to within a 100-metre radius of their homes.

Israeli police spokesman Michael Zingerman said on Monday that since the quarantine regime was tightened last month, they have sanctioned thousands of people over violating the measures.

“The sanctions that the police apply are mostly fines which are slapped on those who should be in self-isolation, but who go out, violating the quarantine regime”, Zingerman pointed out, referring to a fine of 5,000 shekels (about $1,300).

He added that those people who must report that they are obliged to quarantine, but fail to do so are fined 3,000 shekels (approximately $800).

“If earlier, meetings of more than ten people were forbidden, now companies of more than two person are prohibited. The restrictions are very serious. It is advisable that only one person should leave home to go to the store or provide assistance to a relative in need to comply with the prescribed quarantine measures”, Zingerman underscored.

He said that in total, more than 13,000 fines were issued for violating the self-isolation regime, as well as gatherings in mass groups in public places; fines were also imposed over violations of the rules by institutions that are obliged to be closed but continue to work.

🇮🇱 Israel: Police arrested a number of people in Yafa an-Naseriyye
after they refused to disperse a gathering which violated the Health Ministry restrictions.#COVIDー19 #coronavirus pic.twitter.com/lsVtsdtsYJ

Zingerman also said that over 150 criminal investigations were opened during the quarantine, and that those who are suspected of deliberately spreading the coronavirus may face up to seven years behind bars if convicted.

He stated that Israeli police are trying to learn lessons from the current situation in New York City, where one out of every six police officers is reportedly out sick or in quarantine.

Zingerman recalled that “the number of police in Israel and in New York stands at about 30,000 and that 900 police officers in the Big Apple are infected with the coronavirus, while another 6,000 are in quarantine for this reason”.

“Can you imagine the situation when at the moment a third of the Israeli police could not work? This is why we pay serious attention to protecting those police officers who communicate with potentially infected people”, he said, referring to face masks and protective suits that the Israeli police currently wear.

The remarks came after the Israeli government announced a raft of emergency measures in March to limit movement of citizens and trade, due to the COVID-19 pandemic, banning cultural events and closing schools and universities.

According to the newspaper Haaretz, “no foreigners are allowed to enter Israel, unless they apply for special permits from the [Israeli] Foreign Ministry in advance and can prove they are able to self-quarantine for 14 days upon their arrival”.

The country’s Health Ministry has, meanwhile, reported that the number of people infected with the coronavirus in Israel has grown to more than 8,600, with the death toll soaring to 51.