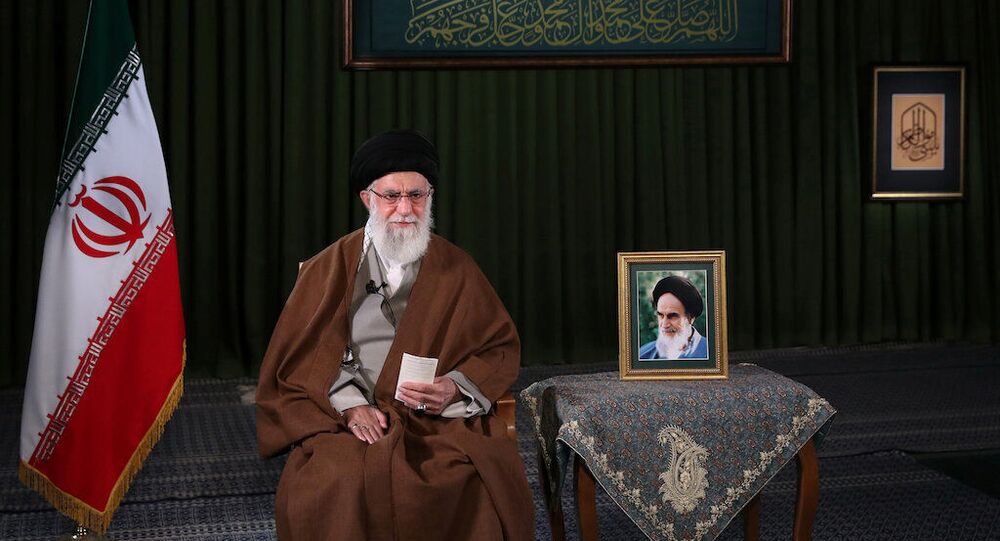 US Anti-Iranian Sanctions 'Made Tehran Self-Sufficient in All Areas', Khamenei Says

Washington reinstated its strict economic sanctions against Tehran in May 2018, when President Trump announced America's unilateral withdrawal from the 2015 Iran nuclear deal.

In a speech to mark the Persian new year on Friday, Iran’s Supreme Leader Ayatollah Ali Khamenei said, in particular, that the Islamic Republic had managed to capitalise on the US anti-Iranian sanctions.

“Iran benefited from America's sanctions. It made us self-sufficient in all areas”, Khamenei emphasised.

He described 2019 as a “tumultuous year for the Iranian nation”, which he said “began with floods and ended with the coronavirus […]”. Khamenei also expressed hope that Tehran “will overcome all hardships with unity”.

He made the statement after Iranian President Hassan Rouhani said that the government’s efforts to fight the coronavirus “in the face of the US's maximum pressure and the inhuman impacts of the sanctions are already remarkable even when compared with the measures taken by other countries”.

Rouhani added that the renewed US sanctions on his country had "caused about $200 billion direct damages to the Iranian economy in less than two years".

This came after Iranian Foreign Minister Javad Zarif accused the Trump administration of “maliciously tightening illegal US sanctions” against the Islamic Republic, which he claimed is aimed at “draining Iran's resources needed in the fight against COVID-19”.

.@realDonaldTrump is maliciously tightening US' illegal sanctions with aim of draining Iran's resources needed in the fight against #COVID19—while our citizens are dying from it.

The world can no longer be silent as US #EconomicTerrorism is supplanted by its #MedicalTerrorism.

“The world can no longer be silent as US economic terrorism is supplanted by its medical terrorism”, Zarif tweeted earlier this month.

The United States has ramped up sanctions on Iran’s oil exports and industries over the past two months, with Secretary of State Mike Pompeo saying in February that President Donald Trump’s administration was advocating for snap-back global curbs on Tehran over the alleged breach of its nuclear commitments.

In the latest development, the State Department said on Wednesday that the US had slapped new sanctions on seven entities, involved in the sale of Iranian petrochemical products.

Washington re-imposed its economic sanctions on Tehran in May 2018, when the White House unilaterally withdrew from the 2015 Iran nuclear deal, also known as the Joint Comprehensive Plan of Action (JCPOA), accusing the Islamic Republic of violating its commitments under the agreement.