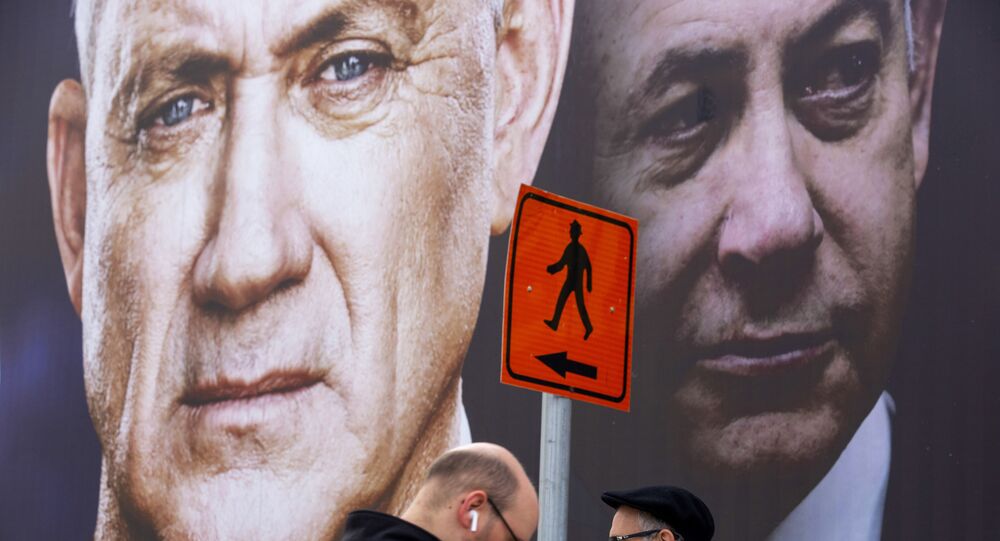 The Blue and White alliance along with Yisrael Beiteinu previously dismissed the idea of forming a unity government with Netanyahu citing accusations against him for breach of trust, bribery and fraud, but didn't rule out an alliance with Likud with another leader.

Leader of the Israeli opposition Blue and White alliance, Benny Gantz has expressed readiness to negotiate a unity government with Likud even if its head, Benjamin Netanyahu, will lead the first rotation of the government as prime minister. Gantz explained that his new position on coalition talks was due to the necessity to cope with the ongoing COVID-19 pandemic.

"The scenario whereby we join a unity government where Netanyahu starts [as prime minister], is on the table. We will see what happens with the negotiations", he said.

At the same time, the Blue and White chief set forth a precondition for such a coalition, demanding that there should be a balance between representatives of Likud and its right-wing allies on the one hand, and left-wing forces on the other. Alternatively, Gantz suggested establishing a government based solely on representatives of Likud and the Blue and White alliance.

There have so far been no official response from Netanyahu's party. The sides have not yet started negotiations on the matter.

In the past, many of Likud's potential partners in a new government, including Avigdor Lieberman's Yisrael Beiteinu and the Blue and White alliance rejected the idea of building a coalition with Netanyahu, but not with his party. They argued that it was unacceptable to form a government led by a prime minister indicted on high crimes.

Netanyahu is accused of bribery, breach of trust, and fraud for allegedly receiving valuable gifts and demanding better coverage in one Israeli media outlet in exchange for giving out political favours. The first hearing on two cases against him was scheduled for 17 March, but it was postponed by the Israeli Justice Ministry until 24 May "due to developments related to the spread of the coronavirus".

At least 200 Israelis have contracted the coronavirus according to the latest data from the country's health ministry. There have been no fatalities among Israeli citizens from the virus so far.

Attempts to form an emergency government to fight the virus came soon after the third snap general election on 2 March 2020. The last election, just as two previous ones, in September and April 2019, didn't result in a majority for any party. Netanyahu has already failed twice to form a coalition government in the follow-up to elections.