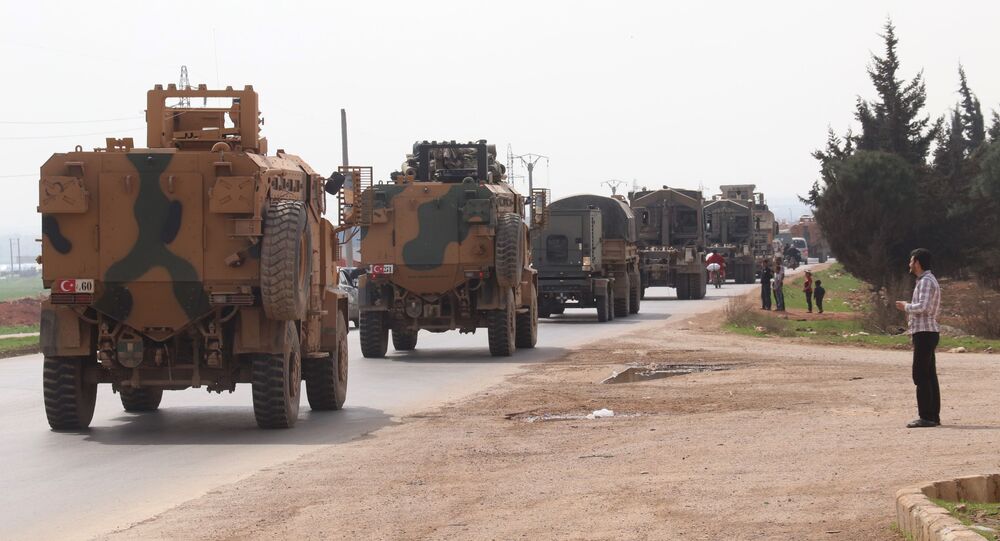 MOSCOW (Sputnik) - Damascus expects NATO and the European Union to at least condemn Turkey’s actions in Syria, which "go against all international legitimacy," but has not yet seen a proper reaction, said Bouthaina Shaaban, a political and media adviser to the Syrian president.

"I find it also amazing that European countries — some of them are NATO members — did not condemn the Turkish invasion of Syrian land," Shaaban said.

Syria is an independent country, which has suffered from Turkey’s "aggression" and "invasion," the presidential adviser said.

"And the last thing we expect from NATO members, from European countries, from every country in the world is to condemn this as illegal as it goes against all international legitimacy and all sovereignty of Syria," Shaaban added.

France and Germany should discuss the Syrian crisis settlement directly with Damascus rather than with Turkish President Recep Tayyip Erdogan, Bouthaina Shaaban said, calling on European officials to "wake up to reality" and change their attitude toward Syria, which has been fighting terrorism to Europe's benefit.

"I think [for] France and Germany [it] is about time to understand that if they want to deal or if they want to play a role in bringing peace to Syria they should talk to Syria and not to Erdogan," the presidential adviser said.

In addition, Shaaban recalled the words of Syrian President Bashar Assad, who said that only those who supported Damascus during the conflict would be welcome to participate in the country's rebuilding.

Europeans should realise that Turkish President Recep Tayyip Erdogan cannot help them solve the migration issue, but instead he tries to boost his country's economy at Brussels' expense, Shaaban said.

"I think the Europeans should know that Erdogan is not the one who has the solution for the migrants, that he is the problem. He is the one who caused all this migration from Syria. And I would like also to put many question marks around the figures that Erdogan gives to Europe in order to get as much money as he can from European countries to help his staggering economy," Shaaban said, referring to the funds that Ankara has asked for to support refugees hosted by Turkey.

Shaaban echoed comments made by European leaders, who accused the Turkish president of using the refugee issue as a "bargaining chip" in talks with Brussels, and alleged that Erdogan had been trying to "blackmail Europeans" "since the very beginning."

Ankara announced in late February it would not be able to stem the flow of migrants and refugees, following renewed tensions in the Syrian province of Idlib, and would open its borders with the EU to those wishing to cross. Soon after, Turkey's borders with Greece and Bulgaria were flooded with thousands of migrants.

The Turkish side has accused the EU of failing to live up to a 2016 agreement, under which Ankara agreed to host thousands of refugees in exchange for financial support from Brussels.

The EU has rejected these claims, stressing that it has implemented the 2016 deal, having allocated billions of euros to assist Turkey.

Erdogan reiterated earlier on Wednesday that Ankara would not close its borders with the EU for migrants until the bloc fulfilled its promises.

According to Shaaban, Syria has already registered several of Turkey’s recent violations of the ceasefire in Idlib, agreed upon by Moscow and Ankara.

"There were many violations of the ceasefire even after the summit between President Putin and Erdogan," Shaaban said, adding that Damascus remains committed to the deal. "We are ready to follow the ceasefire and we all will honour what we commit ourselves to. And the ceasefire is in the interest of hopefully defeating terrorism and reaching peace one day".

Her comments came as Erdogan accused the Syrian government of violating the ceasefire and threatened a tougher response.

The deal established a security corridor that runs six kilometres (3.7 miles) north and south of the M4 highway in Syria, which connects the provinces of Latakia and Aleppo. According to Shaaban, this "will mean that terrorists will have to leave this area."

Tensions between Damascus and Ankara flared up earlier this year when Syrian government troops responded to an attack by terrorist groups in Idlib province. This retaliatory fire killed and injured several Turkish soldiers, who, according to the Russian Defence Ministry, were not supposed to be in the area.