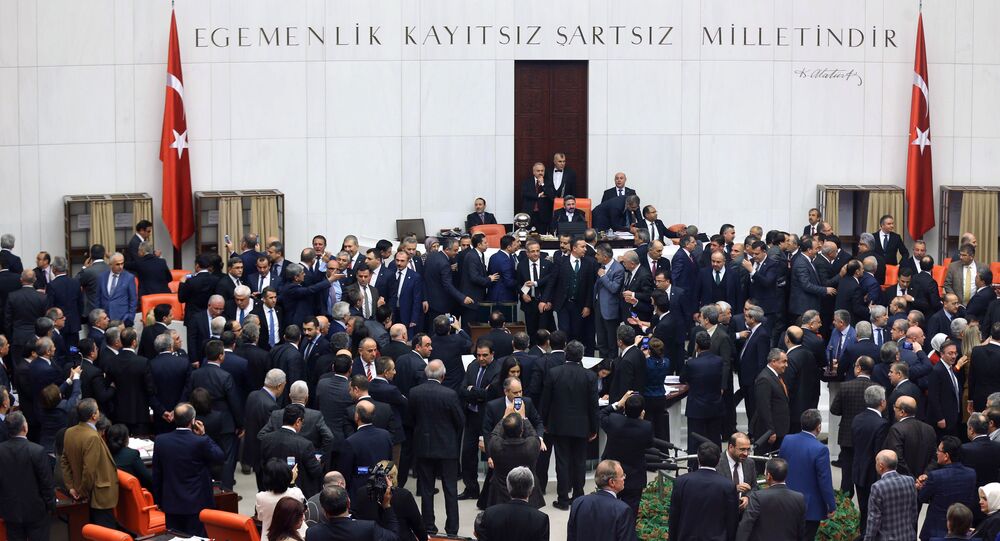 Tensions between Ankara and Damascus in Idlib are affecting all countries in the region, and have led to heated debates in the Turkish Parliament.

A major non-verbal fight occurred in the Turkish parliament amid an escalation of tensions in neighbouring Syria. Opposition lawmakers from the Republican People's Party (CHP) clashed with members of the governing Justice and Development Party (AK Party, or AKP) after Engin Ozkoc from the CHP accused Turkish President Recep Tayyip Erdogan of disrespecting soldiers, who had died in Idlib.

According to him, Erdogan used the word "kelle" (insulting for "corpse") when describing the bodies of the servicemen.

He also called the president "dishonourable, ignoble, low, and treacherous", responding to Erdogan's previous speech, in which he had slammed CHP head Kemal Kilicdaroglu as a "traitor" for offering to hold talks with Syrian President Bashar Assad.

Ankara launched "Operation Spring Shield" last week after Syrian Army attacks on terrorist positions killed up to 33 Turkish servicemen in Idlib. According to information provided by the Russian military, the Turkish troops were among the local militants.