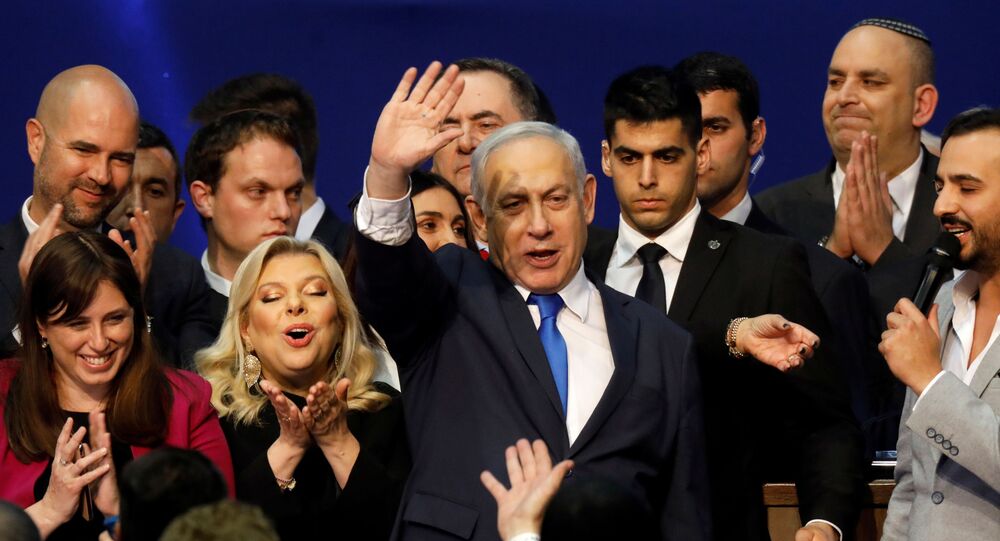 Netanyahu: When Life Gives You 3 Elections in a Year, Stay Undismayed

With results still being counted, Israel’s prime minister has claimed “the biggest win” of his life in Monday’s general election. His Likud party is expected to have the biggest faction in the Knesset, but still fall short of controlling the parliament and being able to form a government.

Benjamin Netanyahu has praised his apparent “sweet victory” in the general election while uncertainty still surrounds the eventual outcome.

Speaking in Tel Aviv on Tuesday, a triumphant prime minister described the result as “the biggest win of my life”.

“This victory is especially sweet, because it was against all odds,” he told supporters at the Likud party’s election headquarters. “We turned lemons into lemonade.”

With 90 percent of the vote tallied, Netanyahu’s Likud party is leading Benny Gantz’s Blue and White by 36 seats to 32. The Likud-led bloc, which includes Jewish nationalist and religious parties, currently has 59 seats, still short of the 61 required to get a majority and be able to form a government.

Benny Gantz, the former military chief, has propped up his ballot with secular centrist parties; together they are projected to win 54 seats.

He has refused to concede defeat so far, but has appeared to realise that the polls were not favourable to him: “I tell you honestly, I understand and share the feeling of disappointment and pain, it’s not what we wanted to happen. If these are the results, it’s not what will bring Israel to the right path.”

The Arab-majority Joint List alliance holds 15 seats; the two leaders have vowed not to team up with the Arab faction in the Knesset.

Netanyahu and Gantz failed to gain control of the Knesset in two elections last April and September, which resulted in a hung parliament.

Yisrael Beiteni leader Avigdor Lieberman, the former defence minister, is going to secure seven Knesset seats and could well emerge as the election kingmaker. Lieberman, who endorsed neither Netanyahu nor Gantz last year, earlier pledged not to join a coalition with religious parties (this means, no alliance with Netanyahu) and is waiting for final results to make a decision.

“There won’t be a fourth election,” he promised vaguely on Tuesday after viewing the results, but did not elaborate on what he would do to prevent that scenario.