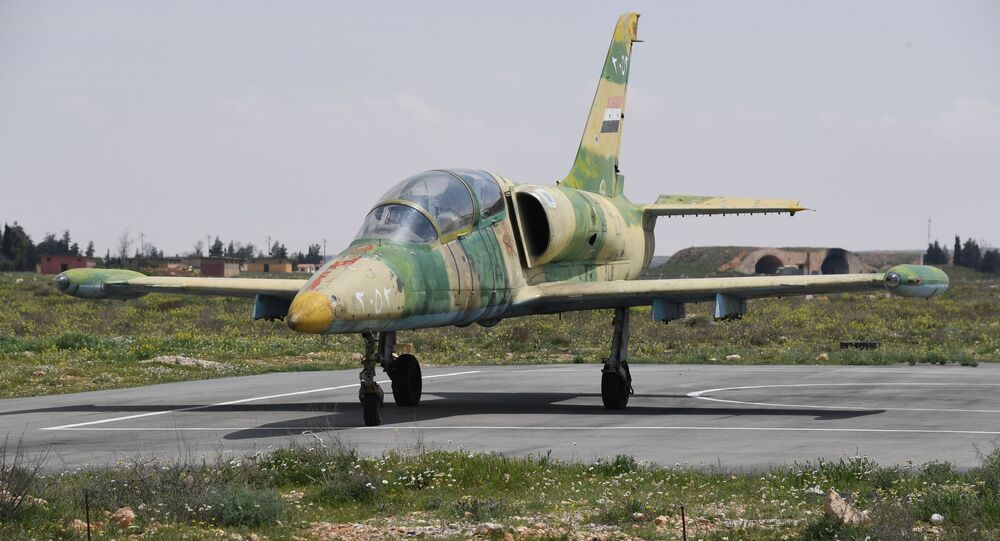 Earlier, a Syrian Defence Ministry source confirmed that Turkish F-16s had violated Syrian airspace in Idlib and shot down two Syrian Air Force aircraft on Sunday, with the pilots ejecting and making it to safety. Damascus has since closed the airspace over the region.

Turkey has targeted a Syrian Air Force plane during its operation against terrorist militants in Idlib province, SANA has reported, citing a correspondent. No details were made immediately available about the fate of the aircraft or its pilot(s).

Shortly after, the official Twitter account of the Turkish Defence Ministry tweeted that an L-39 fighter had been downed by Turkish forces over Idlib during the ongoing 'Operation Spring Shield'.

Turkish media reported that the plane was downed by a Turkish F-16 jet. It's not clear whether the aircraft had to violate Syria's airspace to fire on the Syrian plane.

The Syrian Arab Air Force is known to operate a number of armed L-39 light attack aircraft, with the twin-seater Czechoslovakian-made jets traditionally used as trainer aircraft. Syria has used these aircraft extensively against jihadist militants since 2012. In 2018, Flightglobal Insight estimated that the Syrian Air Force had 63 of the planes in its inventory.

If the plane's destruction is confirmed, this will be the third Syrian Air Force plane to be downed over Idlib province in as many days. On Sunday, a Syrian Defence Ministry source confirmed to Sputnik that Turkish F-16s had violated Syrian airspace and destroyed two Syrian planes, thought to be Su-24 fighter-bomber jets. In those incidents, the pilots managed to eject successfully, and were taken to safety.

On Sunday, the Syrian military closed the airspace over Idlib, warning that it would treat any violators as hostile targets and shoot them down. The same day, the Russian Defence Ministry announced that it could not guarantee the safety of any Turkish aircraft flying over Syrian airspace.

Turkey launched its 'Operation Spring Shield' Thursday, with the offensive coming shortly after the deaths of dozens of Turkish troops during a Syrian Army attack on terrorist positions. The Russian military later indicated that these Turkish personnel were operating amongst Nusra* militants in the region, against whom Syrian troops have been carrying out an offensive since December.

Ankara ramped up operations in Idlib in early February after a Syrian strike targeting militants hit one of the dozen 'observation posts' Turkey has dotting the wayward Syrian province. The situation in the region has since turned into a shooting war between Syrian and Turkish forces, with Moscow seeking to negotiate a ceasefire. At the same time, however, Russia has accused Turkey of failing to carry out its obligations under the 2018 Astana agreements, including the need to separate the so-called moderate rebels from jihadist militants. Over the weekend, President Erdogan of Turkey said that he had asked Russian President Putin to 'step aside' in Syria and allow Ankara to deal with Damascus "face to face."

Putin and Erdogan are expected to meet in Moscow on Thursday to discuss the situation.