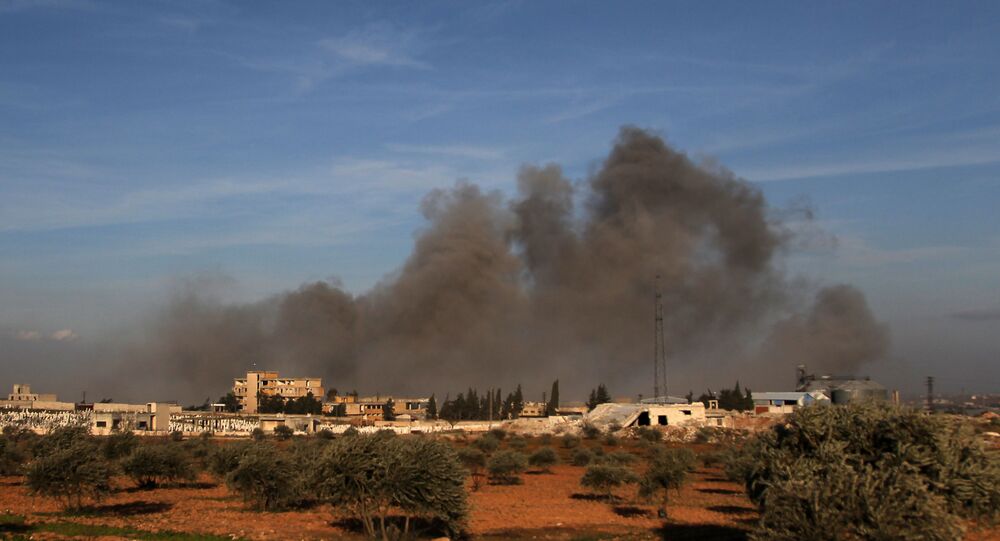 As tensions run high in Syria’s Idlib after Thursday's spike in hostilities, the Syrian state news agency SANA reported on Sunday that the "Turkish regime's terrorist forces" downed two aircraft - thought to be fighter jets - belonging to the Damascus forces.

The Russian Defence Ministry announced on Sunday that it could no longer guarantee the safety of Turkish aircraft flying over northern Syria, after Damascus moved to close the airspace over the embattled province of Idlib.

Damascus announced earlier on Sunday that it would treat any aircraft that crosses into the airspace of Syria’s northwest as a hostile target.

This comes amid media reports that two Syrian aircraft were shot down in Idlib. Both pilots survived after ejecting, according to reports.

SANA reported that the "Turkish regime's terrorist forces" struck the planes, without specifying whether they were Turkish troops or Ankara-backed militants.

There were no reports on what aircraft have been hit, but are thought to have been fighter jets. The Syrian military is known to operate Mig-29s, Su-22s, and Su-24s.

A source in the Syrian Defence Ministry revealed that Turkish F-16s had twice in during the day crossed into Syrian airspace, shooting down government forces' planes.

Deterioration of Situation in Idlib

The recent spike in tensions in northwestern Syria occurred on Thursday, as the Syrian army repelled a large-scale assault by terrorists operating in the area. As a result of a counterattack, 33 Turkish servicemen were killed.

Right after the incident, the Russian Defence Ministry revealed that the dead Turkish troops were mixed with Nusra terrorists who had been present in the province. The ministry also said the Turkish contingent was operating outside observation posts it previously established under the provisions of deals agreed upon by Turkey, Russia and Iran in 2017 in Astana, and again in 2018 in Sochi.

Syria has been conducting an anti-terrorist military operation in Idlib since December 2019, as attacks by various terrorist factions intensified throughout the country's northwest. Tensions rose on 3 February after a Damascus artillery strike hit a Turkish observation post, killing more than half a dozen soldiers. This led to a sharp increase in skirmishes across the restive province, with Syrian forces on the one side and Turkish military and militant groups backed by Ankara on the other.

Russia has been mediating the conflict, calling on the sides to cease firing immediately. On Saturday, the Russian Foreign Ministry reported that in recent talks, Ankara had "confirmed a goal to reduce tensions."

President Erdogan, however, told President Putin on the same day to "get out" of Ankara's way and leave it "face to face" with Damascus. Moscow noted that Russia remains the only state with a legitimate, internationally-recognized right to deploy its military within Syrian borders.