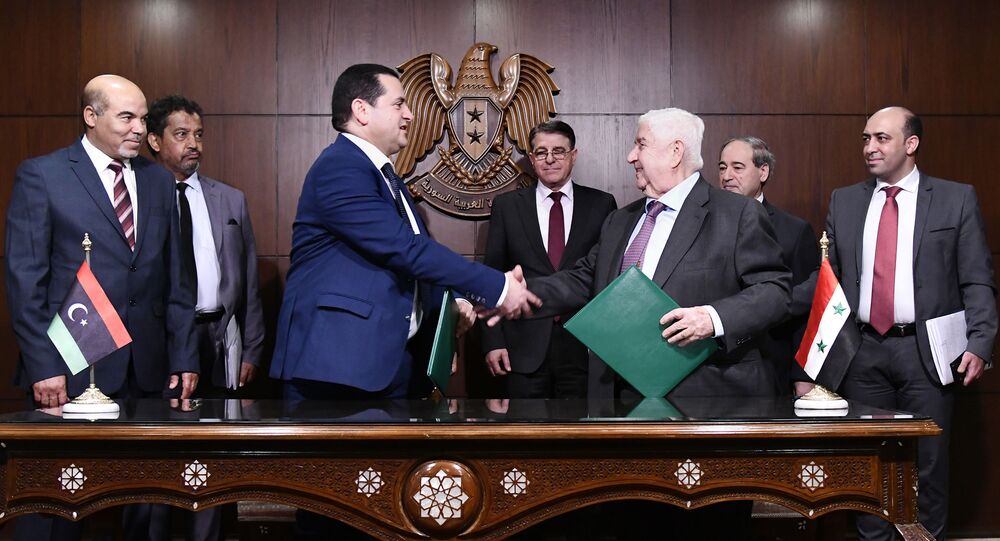 Syrian-Libyan ties were frozen in late 2011, soon after the victory of anti-Gaddafi forces in Libya which recognized a loose coalition of armed anti-Assad militants as the Syria’s “sole legitimate government.”

Tobruk-based government Minister of Foreign Affairs Abdul-Hadi Al-Hawaij and Deputy Prime Minister Abdul-Rahman al-Ahiresh arrived in Damascus on Sunday for talks with their Syrian counterparts, signing a host of joint cooperation agreements and approving the restoration of diplomatic relations.

According to Syrian media, the agreements included a memorandum of understanding (MoU) committing Damascus and Tobruk to “reactivating” ties, reopening diplomatic missions and “coordinating the two countries’ stances at international and regional forums, particularly in standing in the face of Turkish interference and aggression…in addition to enhancing cooperation in all spheres.”

The eastern Libyan delegation was said to include Libyan National Army officials and the head of the Tobruk-based intelligence service, with talks said to have included the need for increased cooperation in addressing the common challenges of terrorism and foreign-backed mercenaries.

Muallem was said to have emphasized the “special status” of ties between Syria and its Libyan “brothers,” with the two countries said to be facing many of the same problems in the security sphere.

Damascus confirmed diplomatic relations would be resumed at embassies in Damascus and Benghazi, with Syria also planning to reopen its embassy in Tripoli at some point in the future.

Both Syria and Libya’s Tobruk-based government, the latter supported by Field Marshal Khalifa Khaftar’s Libyan National Army (LNA), have faced off against Turkish and Turkish-backed forces in recent weeks.

Last week, the LNA accused Ankara of transferring weapons and military equipment to “terrorist organizations and armed groups in the western region” through the Government of National Accord (GNA) controlled port of Misrata. Haftar has also accused Turkey of smuggling battle-hardened Syrian militants to Libya through Tunisia in late 2019, claiming that the mercenaries included Daesh (ISIS)* and Nusra Front* fighters.

Turkey, which has become engaged in a shooting war with Syrian forces in the renegade province of Idlib, has also become involved in fighting with the LNA directly. Last week, Turkish President Recep Tayyip Erdogan confirmed that “several” Turkish troops had been killed in fighting for Tripoli. Sky News Arabia reported that up to 16 Turkish troops and over 100 Syrian mercenaries were killed.

In mid-February, Tobruk government Foreign Minister Al-Hawaij accused Turkey of not only interfering in Libya’s internal affairs, but of seeking to “conquer” the North African country.

Both Syria and Libya descended into foreign-backed civil conflicts in 2011 on the wave of the so-called ‘Arab Spring’ protests rocking the Middle East. In Libya’s case, the government of Muammar Gaddafi was overthrown following NATO-backed airstrikes. In Syria, the US, Turkey, and the Gulf nations provided material, financial and moral support to forces seeking to topple President Bashar al-Assad. Before that, Syria and Libya enjoyed decades of warm ties, with the two countries even forming a short-lived Federation of Arab Republics together with Egypt in the 1970s.