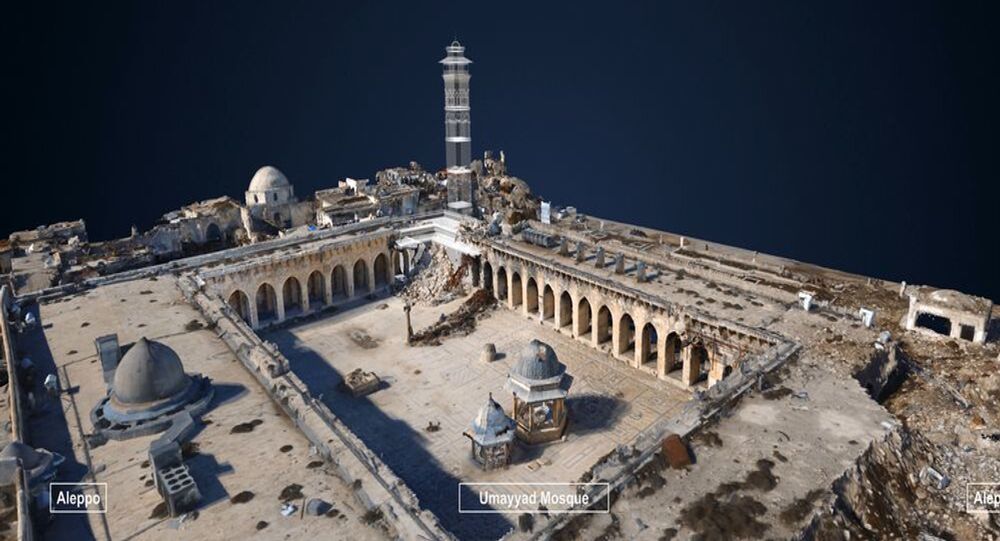 Archeologists, historians and anthropologists from around the world have watched in horror as terrorists, looters, missiles, bombs and bullets devastated priceless artefacts and treasures in some of the world’s oldest continuously inhabited cities in Syria and Iraq in recent years.

The Smithsonian Institute’s Arthur M. Sackler Gallery in Washington, D.C. is presently hosting a unique exhibit inviting visitors to take a glimpse at the Syrian and Iraqi cities of Palmyra, Aleppo and Mosul, with patrons given a chance to see how these cities’ ancient historical treasures looked before their destruction at the hands of Daesh (ISIS)* and other terrorists.

The exhibition, which opened last month, includes historical photographs, video interviews, lectures and, perhaps most impressively, a virtual reality component featuring 3D recreated models of cultural heritage sites in Syria and Iraq created by 3D heritage project Iconem and Ubisoft with support from UNESCO and the University of Lausanne in Switzerland.

The bittersweet experience includes 3D blueprints laid overtop the modern-day devastation, with the images created with the help of drones and cameras taking thousands of shots to create the layered effect. The VR allows users to get a sense of the damage done to the Mosque of the Prophet Yunus in Mosul, Iraq, to see the destroyed ancient souk marketplace of Aleppo, and Palmyra’s Roman ruins, along with the Temple of Baalshamin, the ancient temple dedicated to Canaanite sky deity built during the 2nd century BC.

The cyber-augmented exhibition, first presented at the Institut du Monde Arabe in Paris in late, will continue to be shown at the Smithsonian through October 26, 2020.

Simon Rettig, Sackler Gallery curator, expressed hope that the exhibition would have a tangible impact. “I hope people will take a proactive role in telling our leaders that we need to support residents of those cities or cities elsewhere around the world,” she said.

Ancient Syrian and Iraqi cities have been devastated during battles with Daesh and other terrorists over the past decade, with Daesh also going out of its way to deliberately destroy ancient cultural artefacts.

Damascus has made a concerted effort in recent years to save Syria’s architectural and cultural treasures amid the foreign-backed civil conflict and fight against the jihadists. In recent years, as the situation stabilized, authorities moved to rebuild religious sites, and restore priceless sites such as the Aleppo Citadel (UNESCO World Heritage Site), which was damaged in street fighting with terrorists between 2012 and 2016. Syria has also sought the return of looted artifacts smuggled out of the country, and has accused the US, France and Turkey of plundering its antiquities, calling these actions “a war crime.”

Syria’s broader reconstruction efforts have been hampered by Western sanctions, the US and Europe’s reluctance in committing aid funding toward rebuilding the country, as well as the Trump administration’s unconcealed efforts to steal the country’s oil resources. In 2018, Syrian President Bashar Assad estimated that reconstruction could cost as much as $400 billion and take up to a decade to complete.