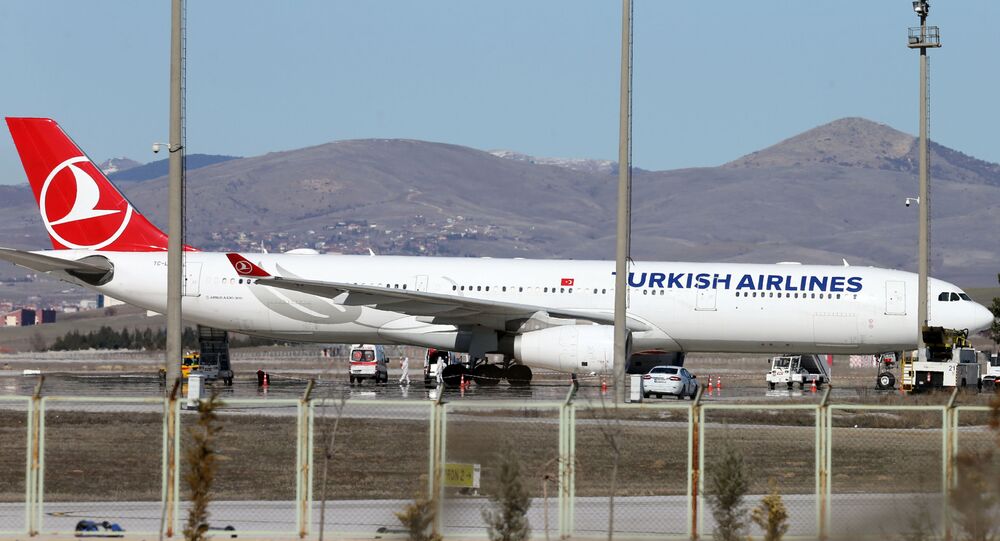 Last week, several nations, including Turkey, imposed temporary bans on people travelling to and from Iran after Tehran confirmed that several people had died and dozens of others were infected with the coronavirus.

The preliminary analysis of lab tests taken from passengers of the plane that made an emergency landing in Ankara after departing from Tehran did not reveal the presence of the coronavirus in any of them, Turkish Health Minister Fahrettin Koca said on Tuesday.

"No one has a high fever among the 140 people on board the plane. Two of them have sore throats, four others have a slight cough. The preliminary analysis of lab tests showed that there is no infection in anyone," Koca told reporters.

Turkish outlet Hurriyet reported earlier this day that a Turkish Airlines plane flying from Tehran to Istanbul was diverted to Ankara over fears that one of the passengers may be infected with the coronavirus.

A video that appeared on Twitter, showed lines of ambulances stationed beside the plane with several people wearing protective suits.

© REUTERS / Alaa al-Marjani
Iraq Reports First Coronavirus Case in Student From Iran
The plane that landed at Ankara's Esenboğa Airport at around 10:29 a.m. had 132 passengers on board, including 17 people from Iran, who are suspected of having the coronavirus.

Earlier in the day, the Iranian Health Ministry stated that a total number of the people infected with the novel coronavirus, officially named COVID-19, in Iran rose to 95, while fifteen of them were killed by the virus.

Amid reports of the coronavirus cases in Iran, several countries, including Turkey closed their borders with the country.