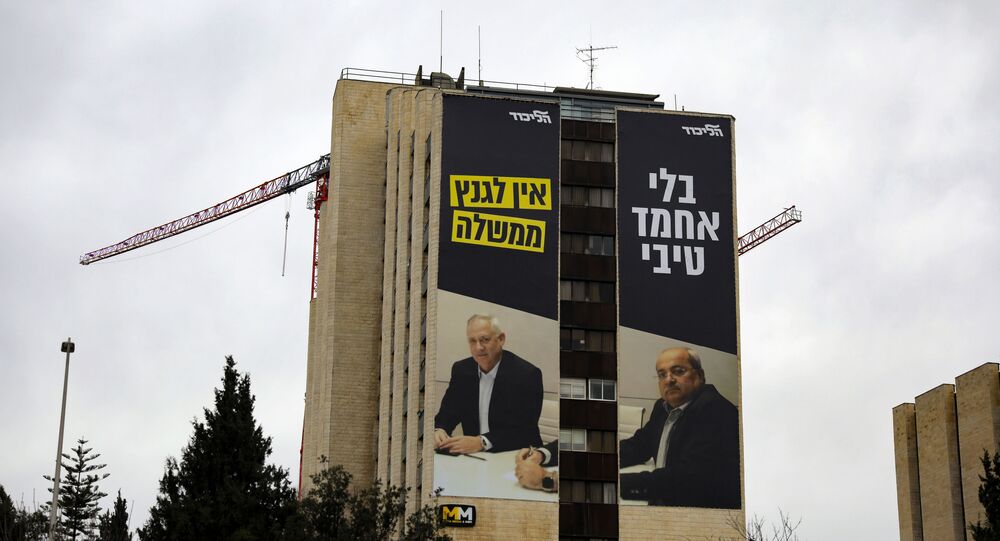 'No Choice': Israel's Arab Party Has Disappointed Many But There's No Alternative - Activist

With less than two weeks left until Israel goes to the polls for a third time in under one year, parties are stepping up their election campaigns, aimed at convincing Israelis to give them their votes.

One of the parties that boosted its campaign efforts is the Joint Arab List whose leader Ayman Oudeh has been touring Israel explaining to voters why casting a ballot in favour of his list would benefit the country.

Formed in 2015, the List - which is made up of four different parties that don't necessarily see eye-to-eye on such important issues like the acceptance of Israel - promises to promote the equality of Israeli Arabs, fight for the creation of an independent Palestinian state, and curb the threat of illegal arms and crime in Arab neighbourhoods.

More importantly though, they also want to make sure that Prime Minister Benjamin Netanyahu leaves office and never comes back.

In the past two rounds these tactics bore fruit. In March 2019, the List received 10 seats in the 120-seat Israeli Parliament, whereas several months later, in September, it gained another three seats becoming Israel's third largest party.

But Yousef Hadad, an Arab activist from the northern city of Nazareth and the CEO of Arevim Ze La Ze (Vouching for One Another), an NGO aimed at bridging between Arabs and Jews in Israel, says the List's climb in polls emanated primarily from their ability to translate the Arab sector's resistance to Netanyahu into electoral success.

"In 2015, Netanyahu started an aggressive incitement campaign that was used by the Joint Arab List. Many that felt scared, marginalised, and treated unequally, wanted to vent their anger and they did so by voting for the Arab parties".

However, the road to success hasn't been easy or short. Before 2015, the Arab parties were struggling to stay afloat, very often fearing that they would not pass the relatively low Israeli threshold of 3.25 percent that's needed to enter the Israeli Parliament, the Knesset.

"Many Arabs - Muslims, Christians, Druze, and Bedouins - were simply not interested in the elections process. Neither were they involved. Many felt desperate from the situation", explained Hadad.

Statistics back up his claims: a 2014 study found that turnout of the Arab sector, which reached 90 percent in the 1950s dropped to just 50 percent in the early 2000s, partially because Arab Israelis didn't take any interest in Israeli politics and because of their general feeling that their votes and opinions didn't matter.

'They Don't Really Care About Us'

Another reason for the low turnout, explains Hadad, was disappointment in the Arab parties who failed in advancing the interests of the people they claimed to represent.

"The general feeling is that they only want to get into the Knesset. But once there, they neglect ordinary citizens' needs and choose to concentrate on the rights of the Palestinians".

In 2019 Yossi Beilin, a former chief negotiator of the Oslo peace accords between Israel and the Palestinians, wrote that the Arab sector cared little about the rights of the Palestinians and paid great attention to the security situation in the country. Of major concern were the growing crime rates and the large amount of illegal arms that the police were struggling to control.

"Arab parties failed to bring us the security we hoped for. Recently, I carried out research that showed that out of 3,000 bills proposed since the Joint List was established, only 2.1 percent of them were passed".

Hadad is not alone: a poll conducted in 2016 revealed that 33 percent of Arabs didn't trust the Arab List, with 20 percent saying they had little faith in the alliance.

Although the activist believes the situation can change, he says politicians should put their differences aside and work together.

"The Arab List needs to cooperate with the Jewish parties and sit in the coalition, not the opposition that continues to slam the state and the government, whereas the Jewish parties should involve representatives of the Arab sector and address issues that bother our society".

For the time being, things don't seem to be moving in that direction. Firstly, Arab members of the Knesset have already stated that they would not enter a government headed by either Netanyahu or Gantz. And, secondly, the Jewish parties too seem to be reluctant to accept Arabs into their ranks.

The Blue and White party, for example, considered the largest in Israel, has only one Arab Member of the Knesset (MK). So does Avigdor Lieberman's Yisrael Beitenu. Others, including those positioning themselves on the left of the political map, have no representatives at all in the current Knesset.

Even the parties' election campaigns didn't bother to target the Arab audience with the two major parties releasing videos and promotional material only two weeks before the elections.

"That doesn't leave many Arabs an option but to vote for the Joint Arab List despite the fact that they don't represent me or many others like me. But I see a change coming and one day I believe we will be able to create a party that would have a mix of Jews and Arabs fighting for the same cause. Until that happens, Arabs will continue to have no alternative".