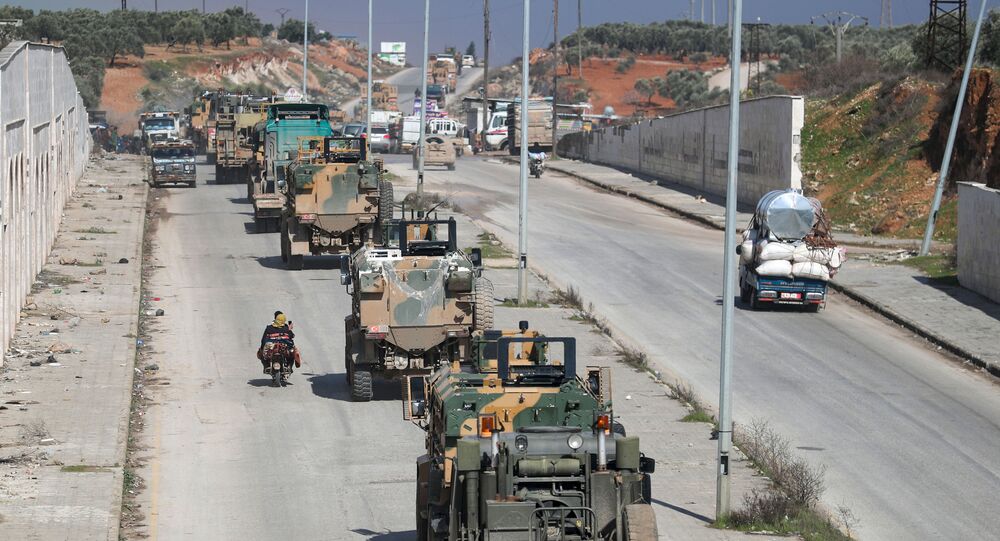 The situation in the province of Idlib, which remains the last stronghold of jihadists in the country, recently escalated to clashes between the Syrian Arab Army and Ankara-backed militants and, later, Turkish troops. Turkey insists that Damascus has violated the ceasefire agreement, threatening to launch a military offensive in response.

Turkey does not plan to ask NATO to intervene militarily in the conflict in the Syrian province of Idlib, where Ankara-backed militants and the country’s army have recently clashed with Damascus’ forces, President Recep Tayyip Erdogan’s spokesman signalled.

“We do not speak about NATO’s coming for a military intervention to Idlib but the Syrian regime’s attacks must be stopped,” Ibrahim Kalin told journalists.

Earlier in February, the Turkish president said that he had urged his Russian counterpart Vladimir Putin to put pressure on Syrian head of state Bashar Assad in order to put an end to the Syrian armed forces’ offensive in the northwestern province of Idlib.

Ankara previously accused Damascus of violating the ceasefire in the province, which remains the last stronghold for jihadists, after several Turkish servicemen died during the army's attack on the observation point in Idlib. Erdogan threatened to launch a full-scale military offensive in all areas if Damascus attacks the Turkish Army, vowing to drive the Syrian forces from the de-escalation zone before the end of February.

The Syrian government, in its turn, stated that the various armed factions in Idlib have ignored the agreement and repeatedly attacked the military.

© REUTERS / Umit Bektas
Erdogan Demands Syrian Forces Immediately Leave Idlib, Refuses to Wait Until End of Month
Syria was split into four de-escalation zones in accordance with an agreement reached between Russia, Iran and Turkey in 2017. A year later, three of these zones were placed under the authority of Damascus, while the fourth one in Idlib and parts of the neighbouring provinces remains under the control of fighters from the al-Nusra* terrorist organisation. On 17 September 2018, Putin and Erdogan signed the Idlib demilitarization agreement, which stipulated the complete withdrawal of radical groups from the demilitarized zone.